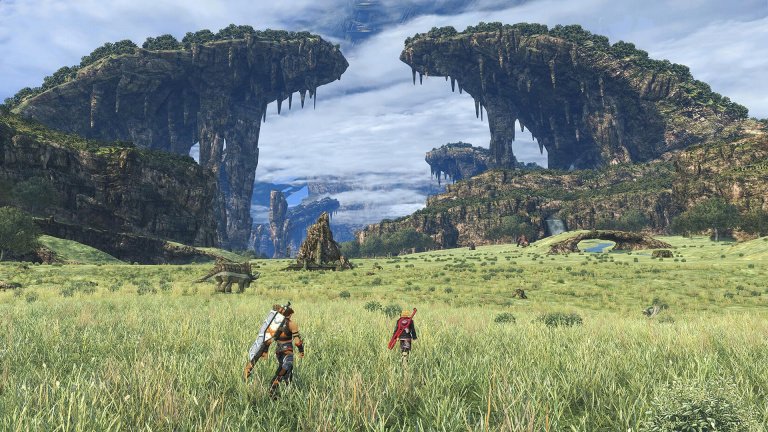 I’ve been playing it for a while now, so here are 10 Xenoblade Chronicles Definitive Edition tips I wanted to pass them along to you guys. Let’s get right into it!

Save Money for Arts Books 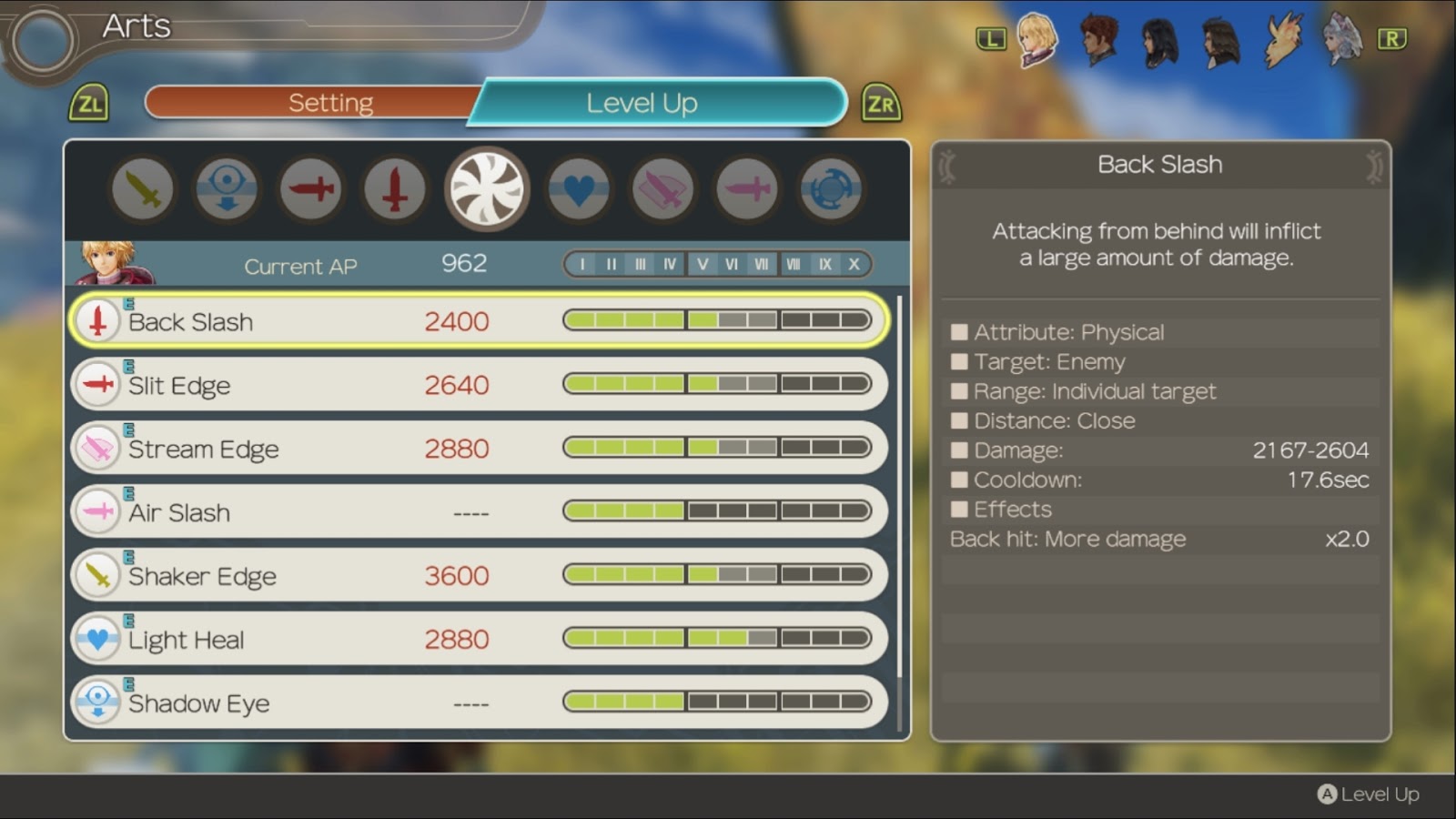 Throughout your adventure on the Bionis, you will come across many different villages, towns and cities. In each of these you’ll find merchants, sometimes you’ll find wandering merchants while you’re out in the field, and I guarantee you’ll be tempted by those blue values on the armour and weapons. Don’t do it!

You will find plenty of weapons and armour throughout the game naturally as you travel to different areas, complete quests and kill unique enemies. You want to be saving your money for the Arts books. These are the items which allow you to level up your party members abilities, which you will absolutely need for later in the game. When you start, you will be able to level up a specific Arts 4 times before having to acquire the next book, which will unlock the next set of levels and so on until you max your skills out. So, make sure to save your money!

Kill Unique Monsters When You Can 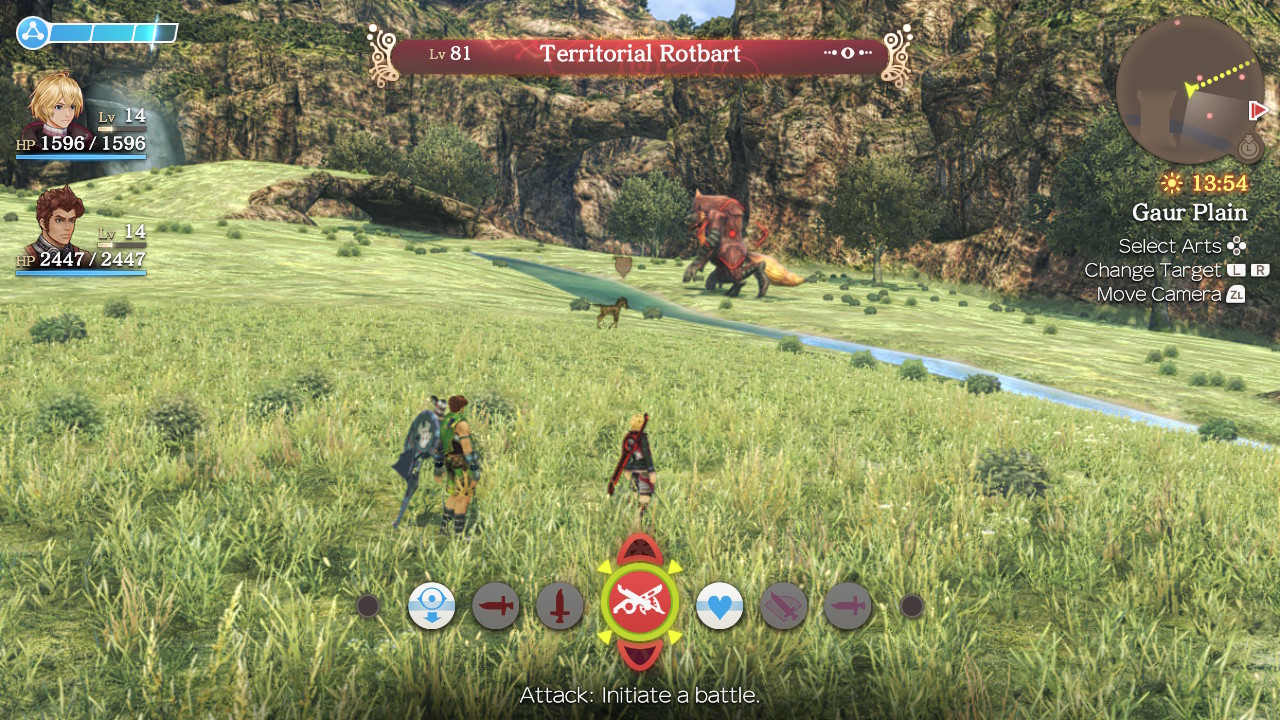 As I mentioned above, unique monsters are great when it comes to weapon and armour drops, but they also give additional rewards. When you kill a unique enemy, you will be rewarded with an affinity coin. These coins are what allow you to fill up your characters skill tree with incredible perks such as:

Boosts to attack or defense

Starting off battles with improved stats

Or even being stronger during the day/night time

If you spot a unique monster that’s too much for you right now, take a note of where it is and it’s level and go back when you’re ready.

Build Affinity Between Your Party Members 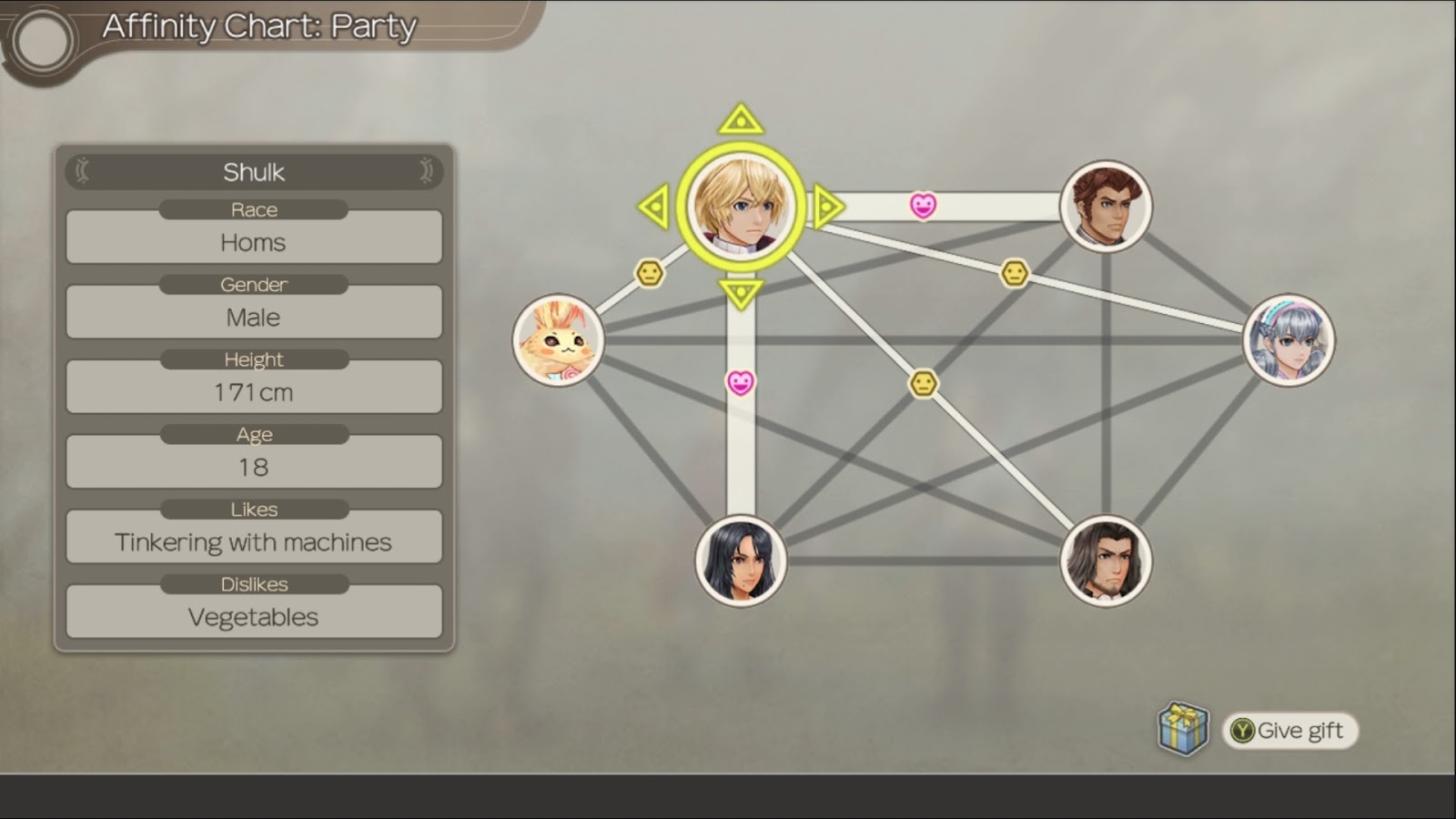 Affinity is a mechanic in Xenoblade which is based on the relationships between your characters. Having improved affinity comes with a ton of benefits. You will gain additional skill link slots for each level of affinity, which means you gain even more boosts.

You will also have access to more Heart-to-Hearts, which are personal interactions between the characters which improves their relationship even further.

Building affinity isn’t difficult and can be done naturally during your playthrough. Performing chain attacks in combat, helping teammates when they are dazed, toppled, slept etc… Burst affinity moments will occur throughout combat, you will notice a ‘B’ appear on screen and you need to press it at the correct timing, this also builds affinity. Questing, Heart-to-Hearts, and gifting your party members presents that they like are all ways to increase the affinity of your party. 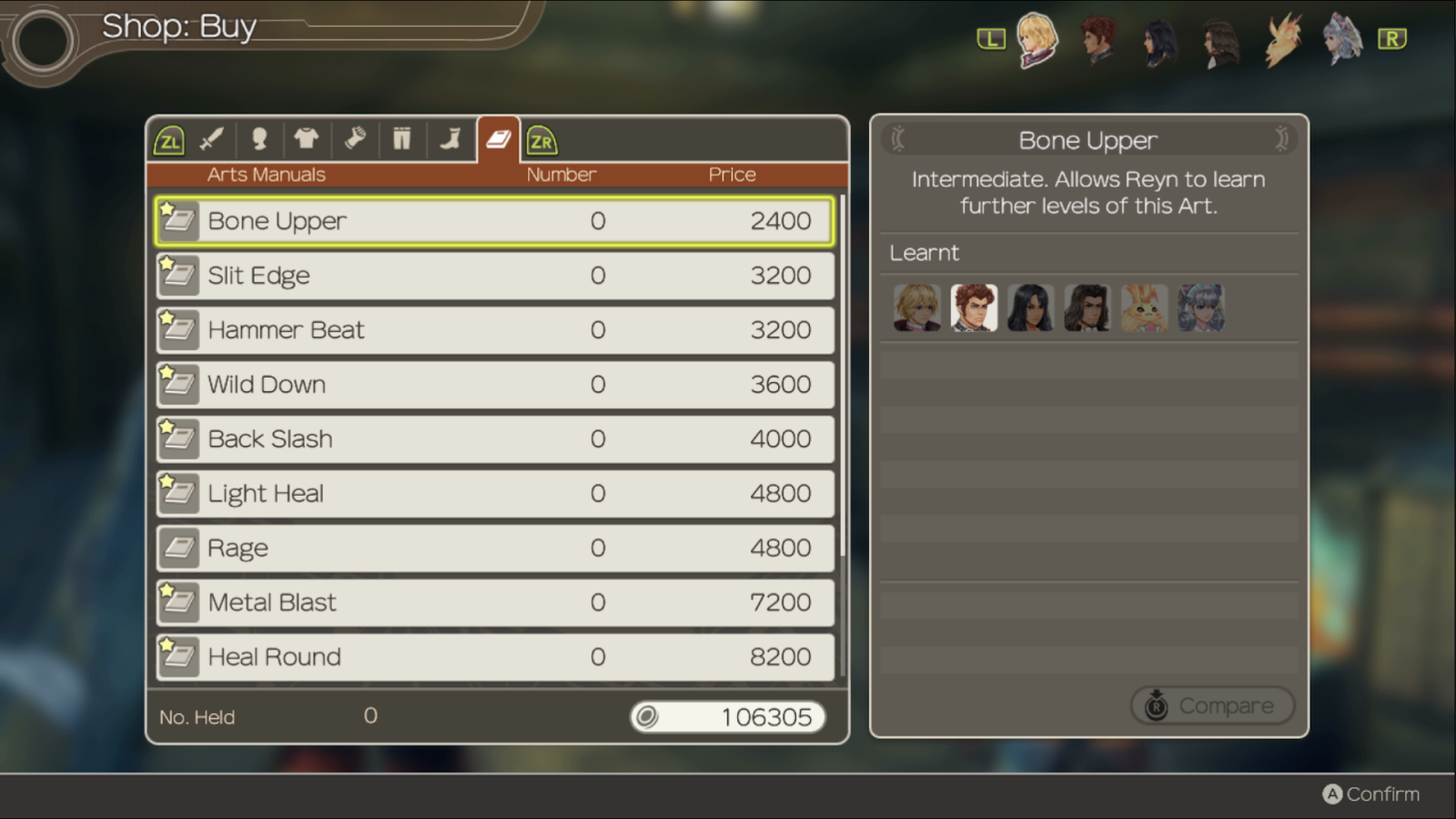 As you progress through the game, you’ll see that almost all of the armour and weapons that you come across will have gem slots with them. You will want to make sure that you always have your party members equipment kitted out with gems, as they will dramatically improve their performance. Additionally, the gems in Xenoblade aren’t a one-time-use, you can remove them and slot them over and over, so you should always be using them.

Gems crafting uses ether crystals found from monsters, cylinders, or from harvesting ether deposits throughout the world. The gems can cover almost everything in the game from increasing your strength stats, giving you defenses against certain abilities or forms of damage, to improving your accuracy at night 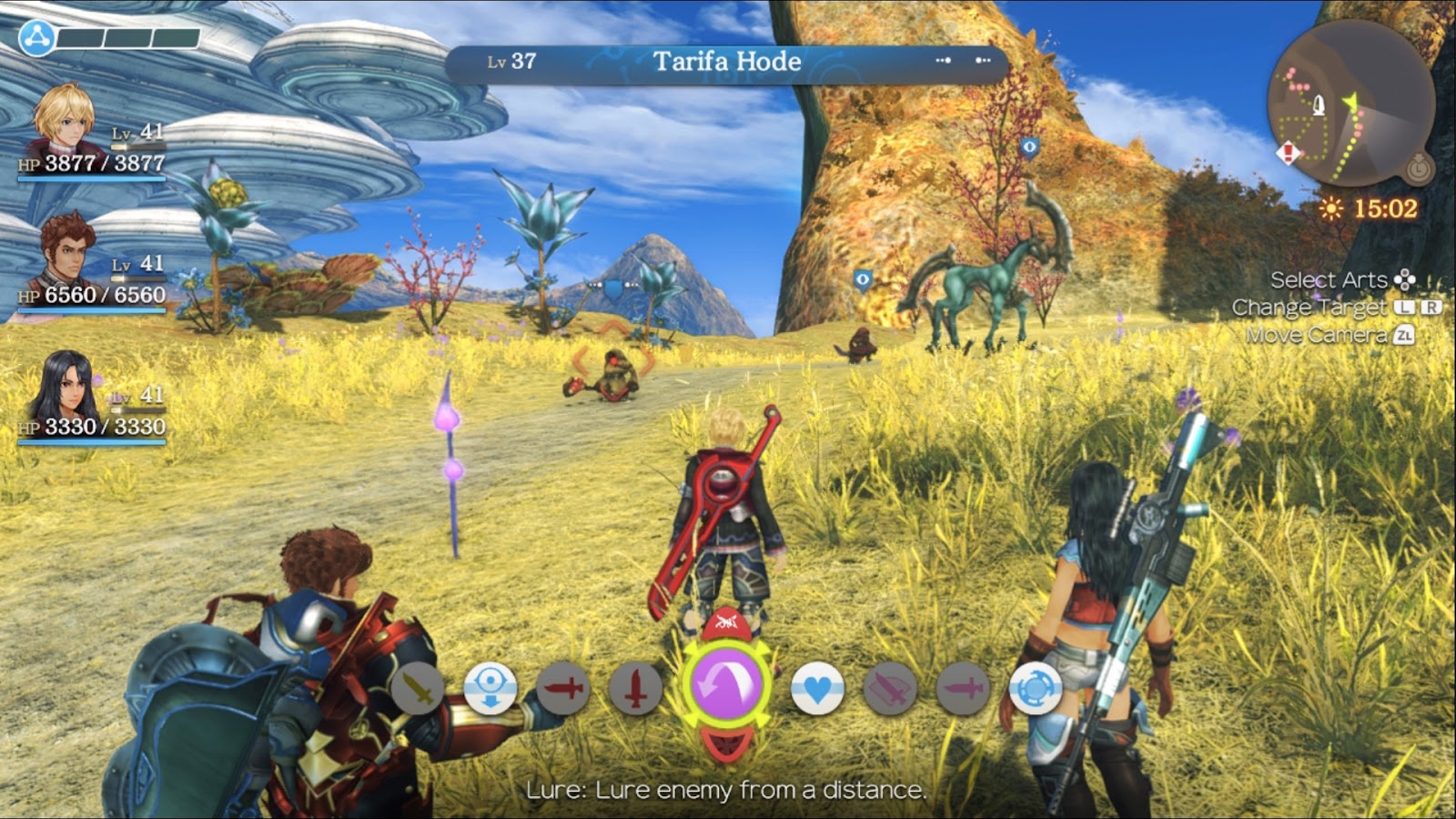 When you start a battle with an enemy in the world, you will usually initiate combat by selecting the Attack option from the menu at the bottom of the screen, then you will go for a preemptive attack. Throughout the game, you will encounter larger packs of enemies that will become a serious challenge should you attempt to take them on all at once. Before pressing the Attack option, press down on the D-pad to reveal the ‘Lure’ option. This will pull the targeted enemy away from the pack, allowing you to take them on without the risk of fighting too many enemies at the same time. 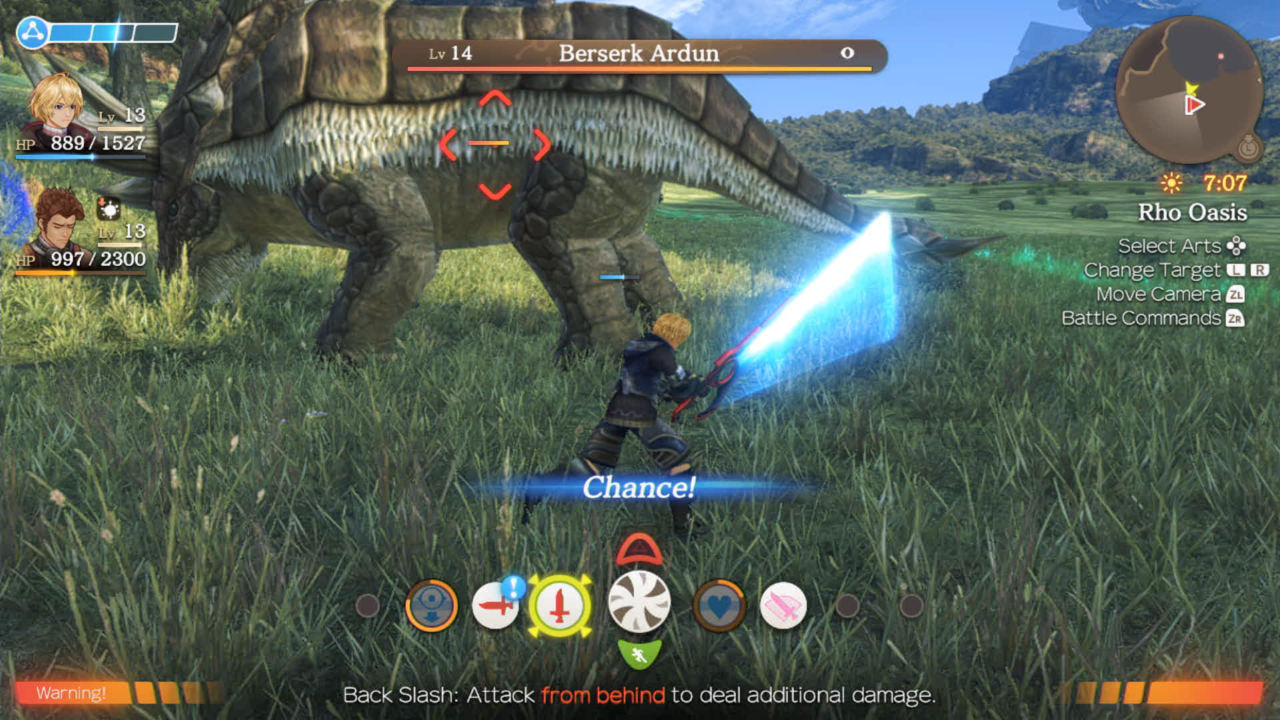 The combat in Xenoblade is certainly quite unique, and I mean that in a good way. Your party members all have roles, some characters are good for dealing damage or having some utility abilities, like Shulk and Melia; Sharla is a dedicated medic class with numerous healing abilities; Reyn is a tanking class with abilities centered around increasing his aggro and defense while reducing the enemies damage output.

Assuming you’re playing Shulk for a large portion of the game, you’ll notice that Arts will display a small “!” when you’re in a position which will cause that specific Art to deal more damage, cause break, topple and so on. Not only do you gain extra damage, you will also fill up the parties affinity gauge, leading to more chain attacks. So just remember to keep on moving around, and not just use all your Arts as soon as they’re available.

Changing the Time of Day 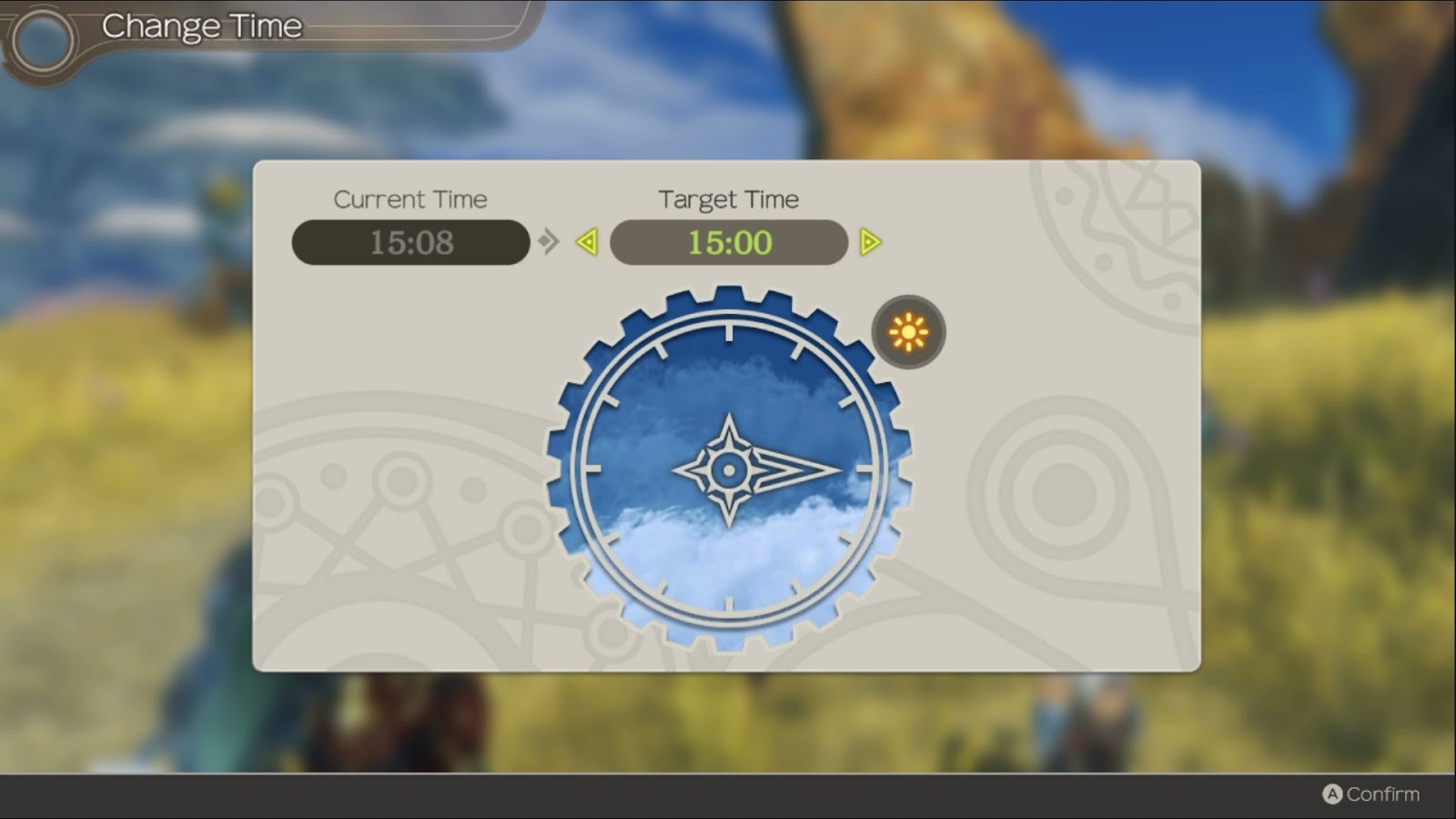 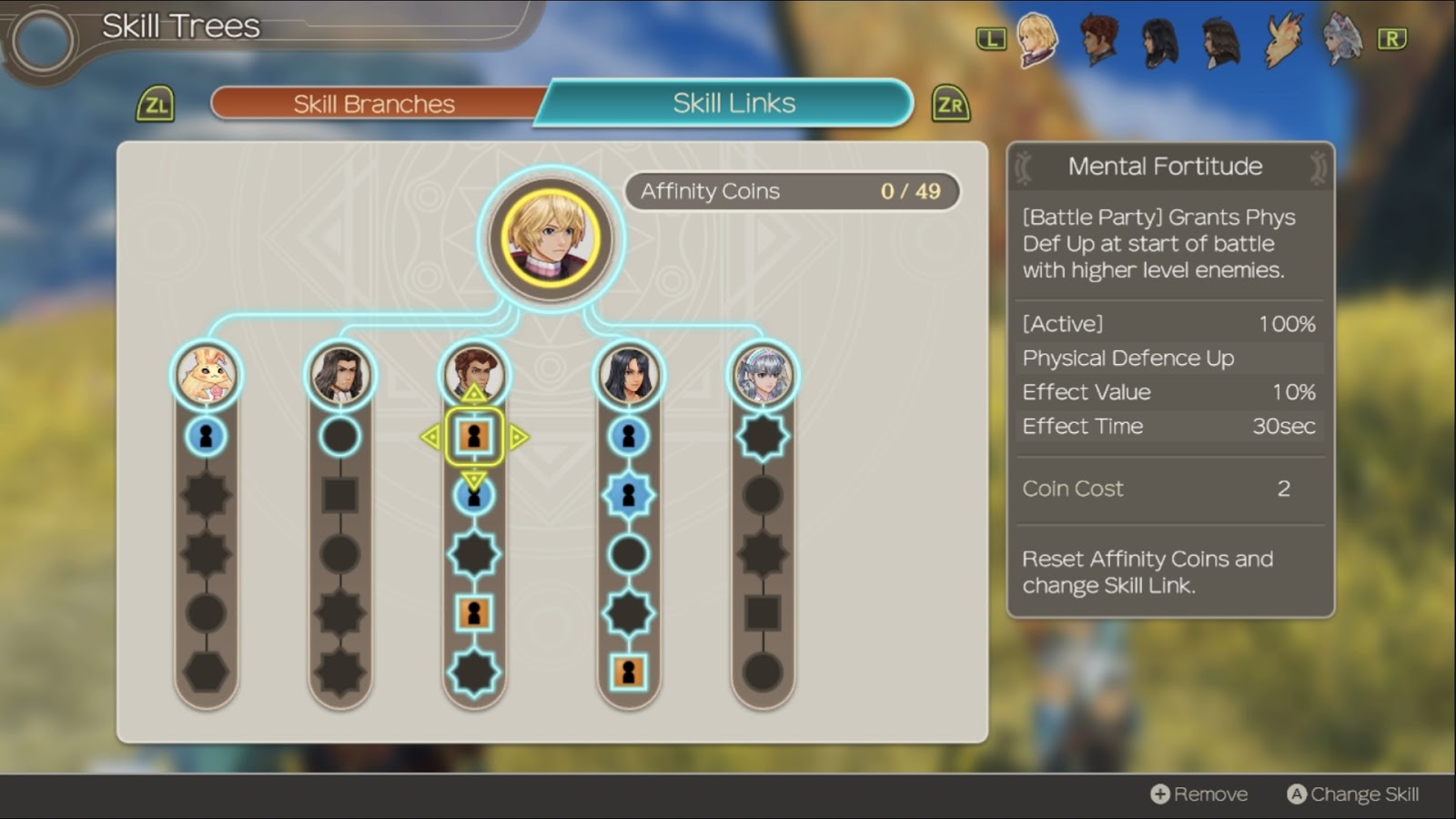 This one may seem obvious as you’ll no doubt notice during the early stages of the game that every time you open the menu you will have something to level up. However, as you progress further and require more and more AP to level up those skills, you may forget as the time between levelling up new skills becomes longer. The same can be said for the Skill Tree.

Whenever you level up, you acquire an affinity coin or increase your affinity level with a character, quickly check through the Arts and Skill Tree menu to see if you can level anything up. 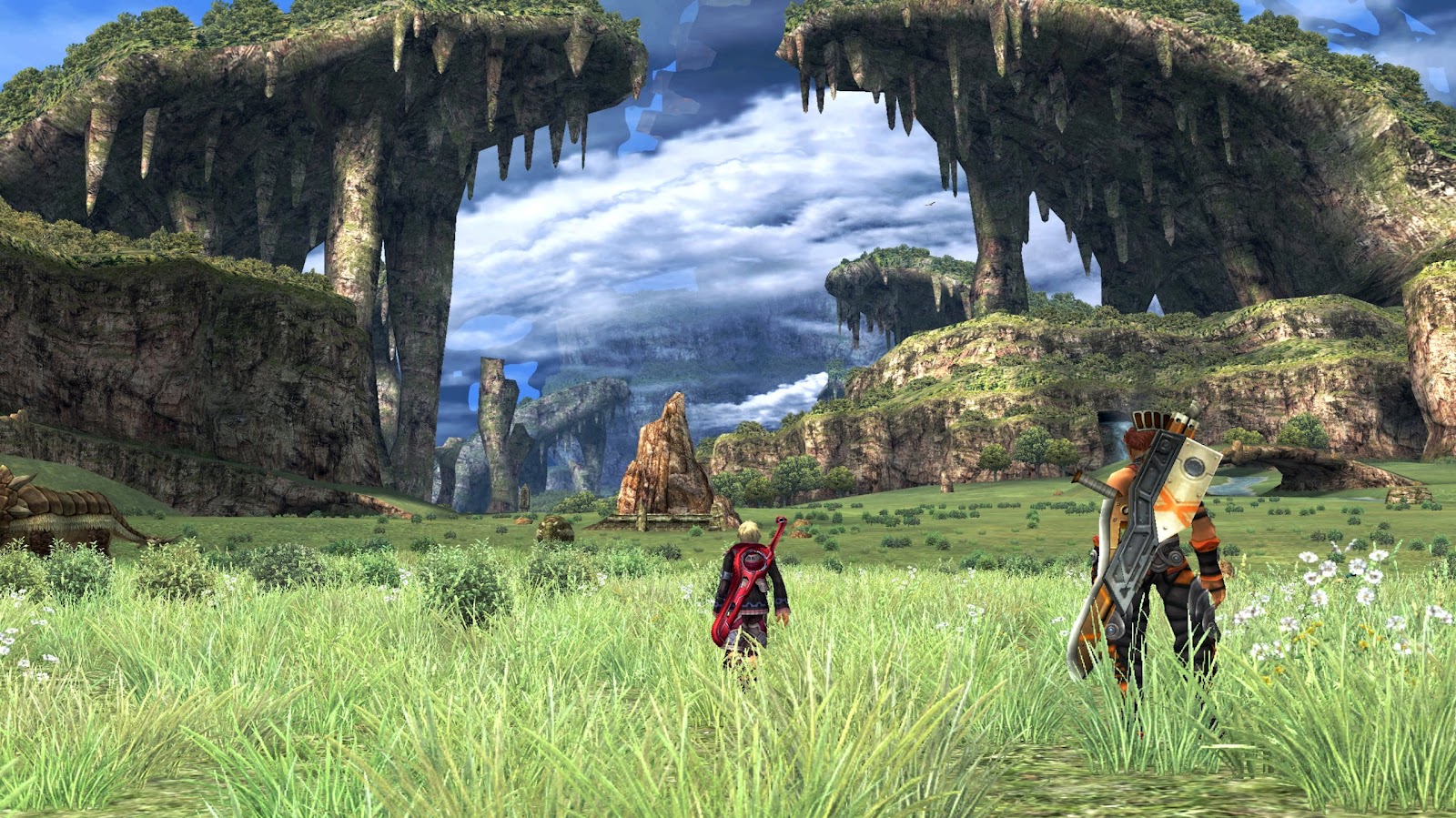 Exploring is always great fun in JRPG games, you never know what you might stumble across. Random quest givers, unique monsters and incredible environments are always things you should be on the lookout for when playing these kinds of games. Xenoblade is no exception when it comes to exploration. With its humongous areas filled with numerous levels, caves and towns, you should always be exploring.

This is made all the better when you find out that there are numerous fast-travel points throughout the world, so discovering as many as you can could save you a load of time later down the line when a quest requires you to travel to a faraway area. To top it all off, you will even be rewarded with experience for exploring. 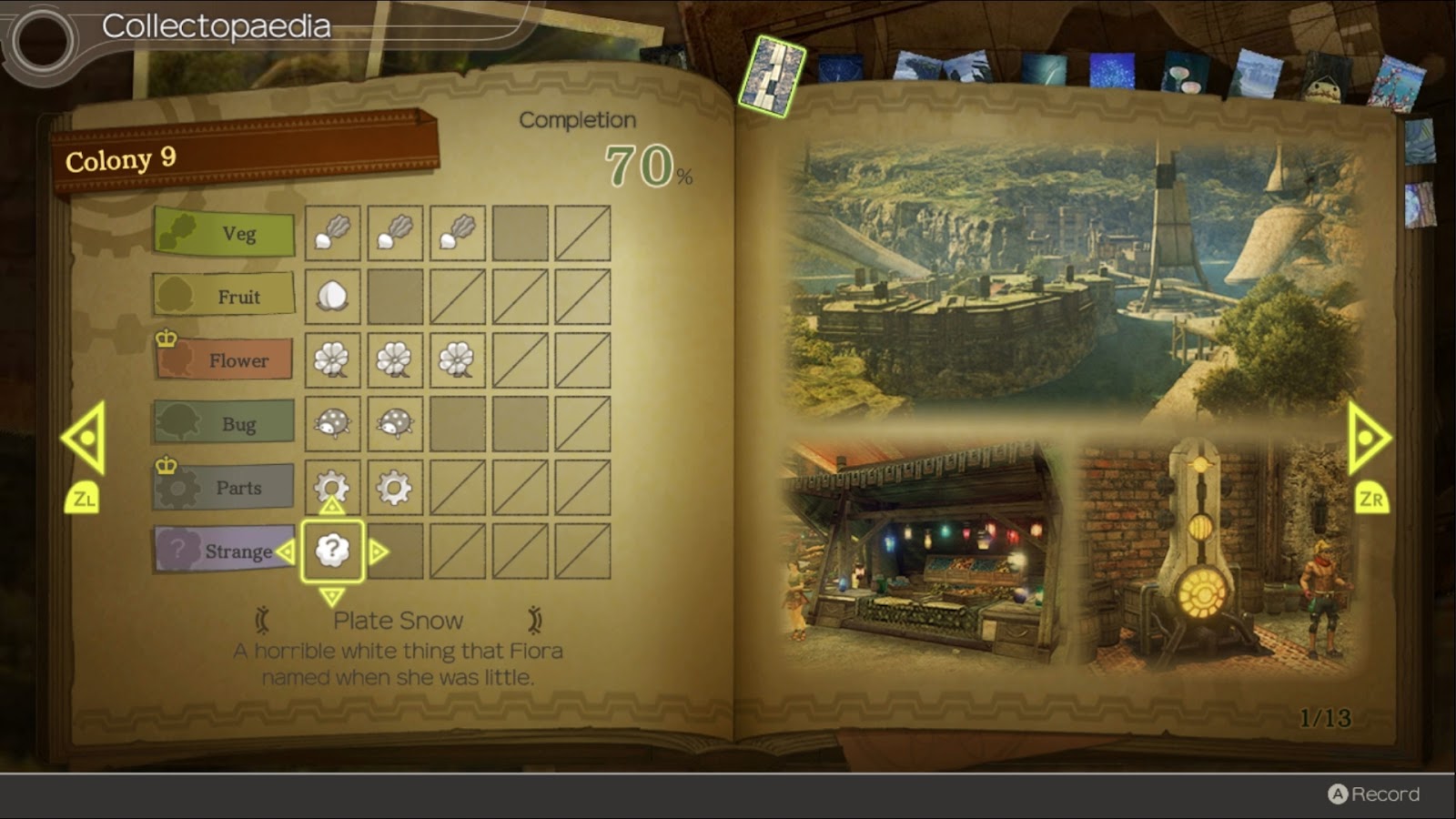 This ties in perfectly with exploration. All over the world of Xenoblade, you will find these small blue orbs which are collectable items which have numerous different uses. These items can be used for trading with named NPC’s throughout the game in order to get certain pieces of armour or weapons.

There is also the Collectopaedia. With each page being dedicated to a specific area in the world, it contains a slot for each item found in those specific areas. For each collectable you find, you’ll receive a reward. Should you fill out the entire page for an area, you’ll receive even better rewards. It’s definitely worth going slightly off-the-beaten-path in order to grab those blue orbs.

That about covers it when it comes to some of the tips and tricks in Xenoblade Chronicles DE. I’m personally loving the game, so look forward to a review in the near future. I hope you guys are enjoying the game!

Looking for more Xenoblade? Check out our Waifu Review.

You can get the game on Amazon here!

Tifa is mine. Don't even look at her. 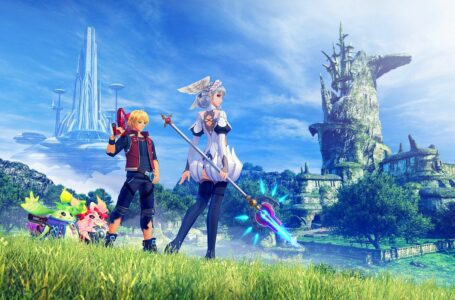 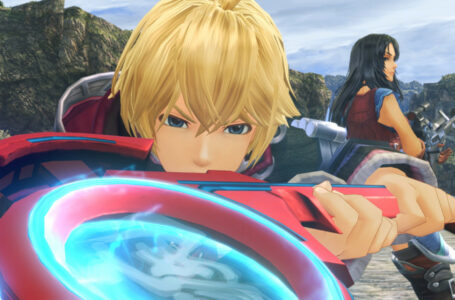