Death Come True is an upcoming adventure full-motion video (FMV) game written and directed by Kazutaka Kodaka, the brains behind the highly successful mystery visual novel Danganronpa series. The game will be the first release from developer Too Kyo Games, having been founded 4 years ago by ex-employees of Spike Chunsoft to create indie projects and new intellectual properties. Death Come True will feature reminiscently tense and dramatic musical scores, noticeable from the game’s teaser videos. This is due to the talent of composer Masafumi Takada, a name familiar to fans of killer7, No More Heroes as well as the Danganronpa series.

The game follows the player character Makoto Karaki (Kanata Hongo) waking up in a hotel room without his memories and deemed as a wanted serial killer. His amnesiac state forces players to find clues to discover his previous actions and solve his present situation, and with every decision and death ending players reach, he is able to “time leap” to alter the past. Discover his identity through sorting friend from foe, and seek the truth of the hotel through various deaths and many playthroughs.

Death Come True is a video game that challenges how interactive a movie can be. It has a stellar cast, from Chiaki Kuriyama of Kill Bill and Battle Royale notoriety, and well-known Seiyū (anime VA) Yuki Kaji, an original and exciting premise, and stylish, high production in its niche FMV narration. Death Come True is proving to be a dream come true for fans of both mystery and FMV games.

Death Come True will be releasing worldwide next month in June on PlayStation 4, Nintendo Switch, Steam, and mobile devices. Its release date will be revealed on the game’s Twitter account at 10AM (BST) on Friday the 5th of June. PlayStation 4 and Steam releases will be released at a later date. 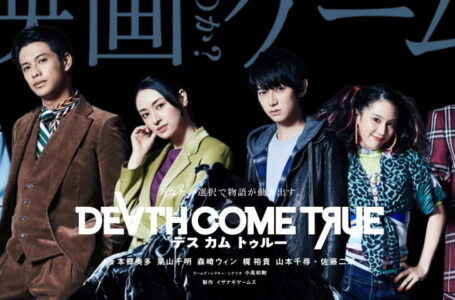