With a name like a virus, Lethal Application is an interesting doujin game. You have to reach the top of the level by propelling yourself with the recoil from your weapon. Initially released as a commercial title this game was re-released as a free downloadable game in order to promote its sequel, Lethal Crisis.

The game has a simple story told trough visual novel cutscenes between levels. You are Aplica a mass murder war machine shaped as a girl. Awoken from your slumber you proceed to get to the top of the facility, while finding out your true motives. While the story and character may be nothing to write home about it still is a welcome feature since it keeps you wondering why and what is going on.

On the other hand gameplay is what takes the cake. You have to traverse the levels by firing in opposite direction of where you want to go. Firing decreases your energy bar which doubles as your HP. This is quite an interesting take on the typical shooters where you can move in any direction and fire as much as you want. It goes without saying that it will take you some time to get used to this kind of movement and ammo consumption, but at the same time this is what differentiates this game from all the other shooters to date.

Aside from the main weapon you also have a special weapon that depletes its own energy bar, which automatically fills up when not in use. You begin with one special weapon and you can collect additional weapons by killing red enemies and picking up the power-ups they drop. Collecting three powerups of a specific weapon increases its level, making it more powerful.

Throughout the game you will find different special weapons each having its own use. One special weapon is a melee attack, while another blocks incoming fire. Special weapons can be swapped at will allowing you tu use the best weapon in every circumstance. Knowing when to use which weapon is especially important in latter levels where the game throws everything it has at you.

Holding the main and special weapon buttons at the same time turns on your burst mode, which gives you the ability to fire three shots at once. When you enter burst mode your energy is refilled to the max, but after that it drains rapidly regardless of whether you fire you main weapon or not. Knowing when to switch to burst mode is critical, because it fully recovers your energy but at the same time it’s easy to die if you can’t complete before you run out of energy.

Making things a bit easier are energy canisters littered through the level. Collecting these replenishes a portion of your energy depending on the size of the energy canister. As you destroy enemies and collect canisters you gain experience. Once you earn enough you level up, fully restoring your energy and increasing your maximum energy capacity.

Throughout the 10 stages of the game you will visit some varied locations, each of which has its own gameplay mechanic. The sky section of the game features booster pads that quickly blast you in the direction of the arrow. This can boost you to the finish line, but at the same time some arrows may be intentionally placed to send you in the wrong direction. Levels in space have black holes that keep pulling you toward them. Even though they don’t harm you they still make traversing asteroid fields a nightmare. Lethal Application features a horizontally looping screen allowing latter levels to use this mechanic in order to have more of a maze like design.

Levels in Lethal Application have no time limit, but an energy field keeps raising so you can’t backtrack too far. Some areas have powerups in a place you have to backtrack to. This is why you have to be quick while navigating the level in order to collect that power up before it becomes inaccessible because of the electric field.

The game features a ton of boss battles some of which are quite memorable. The first boss will appear already by the end of level 2. It’s here that you have to learn to use your special attacks precisely, because it’s easy to use up all of your energy attacking and not having any way of recovering. You do battle some of the bosses multiple times, but it never gets dull and repetitive.

The graphics could have been better. That’s not to say that they are bad, but when compared to some of the other doujin games they aren’t very impressive. On the other hand everything is very colorful, making it easy to keep track of your character even in the most chaotic of scenes. Unlike the graphics, the effects are very good and things like different bullets and hazards really look good. Another plus is the huge amount of enemies with new types being constantly introduced.

Like previously mentioned, the locations you visit are visually quite distinct such as a mechanized facility, the sky and even outer space. Each of these levels also has its own specific sound track which perfectly fits in with the theme of the level.

Lethal Application is a short game and can be beat in around an hour. You can’t save and load so you will have to beat the game in one sitting. After you complete the game you will unlock a new Ultimate gameplay mode allowing you to play through the game with a different character. Additionally, the Ultimate mode features a different story, special weapons and boss battles, encouraging you to play through the game a second time.

THE VERDICT
Lethal Application is the reason why I love doujin games. It takes a simple gameplay concept and really makes a great game with it. Even with its mediocre graphics Lethal Application is an awesome title. The game features an unofficial English translation, so if you want to follow story in English you will have to find it and patch the game. Being a free game there is absolutely no reason not to try this gem…unless you are afraid it really is a Lethal Application. 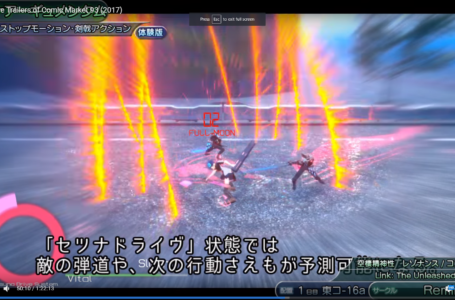