Final Fantasy VII Remake has done some incredible things, character development being an outstanding example. With this in mind, us cultured folk have been gifted with three of the most wonderful women in video games. Jessie, Aerith and Tifa. Let’s deep dive into why these ladies are all so god-tier, in our Final Fantasy VII Remake Waifu Review!

Spoiler warning! There are some LIGHT spoilers ahead, so just be aware! 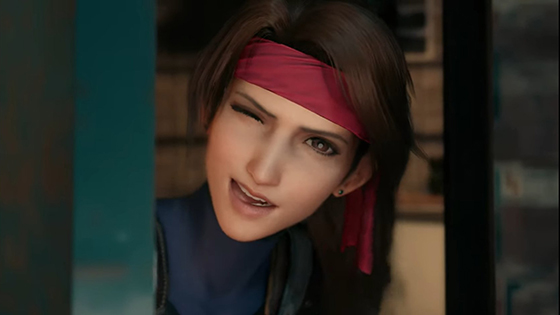 Where to begin with Jessie. She has improved the most in the remake, and when I say this, I don’t just mean that she looks prettier now. They gave her a touching backstory and a personality that is such a tease, but you could never dislike her for it.

Jessie grew up always wanting to be the leading lady in a performance at the Gold Saucer, and due to her father falling ill on the night her dream was about to come true, she could never fulfil this lifelong goal of hers. She immediately puts her family first and rushes to the side of her mako-poisoned father. She put everything aside for her family, that’s some top-tier waifu stuff.

Jessie is always an upbeat character, oozing with so much personality that it’s wonderful to just listen to her. During the Bombing mission at the very beginning of the game, Jessie has a fantastic line, which goes something like: “Aw, you’re talking to me instead of going down to the reactor? Well, I can wait but why don’t you go head down there and blow her mind first.”. She hits you with this flirty behaviour every time you see her, and it never gets old.

I suppose it’s somewhat similar to Aerith in this regard, but Jessie is very forward when it comes to her advances and displaying her interest in Cloud. From the moment you meet her, she seems fairly smitten with Cloud, constantly commenting on his good looks and reliability when it comes to being a mercenary. She’s an actress, however, so there is this sense of confusion, maybe these kinds of feelings are all a game to Jessie. But then, you get hit with the scene after parachuting down from the sector 7 plate, and Jessie asks you to come over tomorrow night. She is so full of excitement and genuine interest if you say yes, that there is no way she’s acting. It’s my favourite scene of Jessie in the game.

Even with all of this outward positivity, Jessie shows remorse and confusion at her actions regarding the bomb she created for the attacks on Shinra’s reactor. This makes you wonder if sometimes all the positivity is a facade for Jessie to help ease her mind and distract her. However, chapter 12 shows you everything. This was eating away at her and causing her so much worry. She’s an imperfect person covering her problems with outwards positivity, just like a real person. 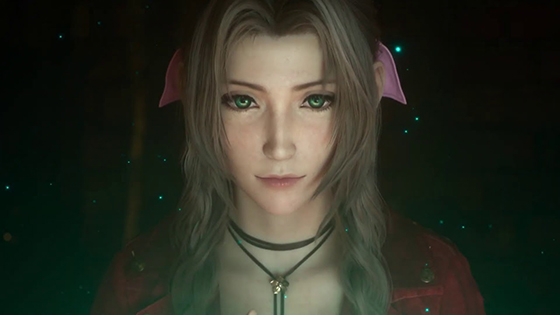 I won’t lie, Aerith is very special in this game. In the original game, I always viewed Aerith as this perfect character that we must protect as she is integral to the story and the planet. I never really viewed her as a character beyond that. Maybe that was because of the game’s graphics or perhaps the way she was written. However, Remake has completely melted me when it comes to everything about this wonderful character.

Aerith isn’t this perfect angelic being anymore, well she still is, but she is an angel from the slums, if that makes sense? She has some roughness to her, she will curse and play things off in a cocky manner. She knows her way around, how to go about dealing with certain types of people and when to avoid certain situations altogether. It really feels like Aerith has lived in these slums for a while and she has learnt everything about them.

During the rooftop scene, just after helping Aerith escape the Turks, she will laugh about the situation saying the Turks came for her because they thought she had the makings of a super capable Soldier, teasing Cloud. She even manages to get a rise out of him. Aerith climbs the ladder and as she approaches the top, the ladder breaks and Aerith simply says “shit”. This never would have happened in the original, but it’s something I absolutely loved. Then her cocky, playful behaviour as she’s tightrope walking across the pole and pretends to lose her balance, to then straighten up and say “Gotcha” as Cloud rushes to help thinking she’s going to fall. She’s great.

I think what makes Aerith the most amazing though, is that her past hasn’t held her down, it has made her into someone who finds joy and happiness in the simplest of things. SPOILER Aerith is the last living ancient, a being who can communicate with the planet. Because of this, she spent a large part of her childhood being locked in a room in a research facility. Now that she’s free, she simply loves living. For players of the original, this is what also hurts the most about loving Aerith as a character.

Finally, Aerith is a badass. She pushes Cloud to make the decisions he is sometimes unsure to make. She is willing to put herself in harm’s way to help Tifa, a character important to Cloud and that’s all the motivation she needs in order to act. Also, she beats people by twirling around with her magical stick. What a woman. 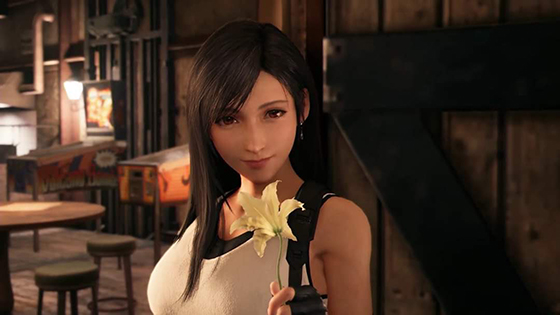 This one is going to be hard for me. I have been a strong fighter on the front line of the Tifa army since my first playthrough of the original. When someone says “waifu” an image of Tifa is what appears in my mind. Somehow, Nojima and Nomura, have managed to improve on a character I had already believed to be perfect. We don’t need to talk about character design, we all know that all these characters look fantastic, Tifa especially. For my truly cultured friends out there, Zettai Ryouiki. All I need to say.

Tifa is a perfect character to me personally, or rather, it’s the fact that she isn’t perfect is what makes her so special. SPOILERS Tifa’s motivations could be boiled down to revenge. She is angry at those who are responsible for what happened in her hometown of Nibelheim. However, she can never come to the clear conclusions that Barret and the other members of Avalanche do. Why? Because Tifa is a character who constantly brings perspective into every action we take. When we infiltrate Shinra, Barret speaks of complicity amongst the employee’s of this evil company. Whereas Tifa reminds us that they are just people looking to keep their families safe and provide for them.

She always puts her own feelings on the back burner with the thought process that her issues aren’t important right now, and that she needs to focus on the bigger picture. When Cloud almost kills Johnny in chapter 3, you can see and hear the discomfort that Tifa bears during the entire scene. So much so that it brought her to telling Cloud she was afraid of him. You could say that Tifa and Aerith are opposites in many regards. For example, during the Train Graveyard, we see Aerith grab Clouds arm playfully.

Aerith is very confident in putting herself out there and displaying her feelings. This causes Tifa to also grab Clouds arm, something she wouldn’t have done had Aerith not done it first. This is such a cute part of Tifa’s character. She felt somewhat threatened by Aerith’s ability to display these feelings, and caused Tifa to act out of character in order to keep up. Ahhh, they’re both so great.

Tifa cares for Cloud. She cares more than anyone for the real Cloud. The boy who grew up next door to Tifa, but was considered an outcast by the other kids in Nibelheim. Despite being an outcast, Tifa still cared a lot for Cloud and the same can be said for Cloud’s feelings towards Tifa. During the flashback to their conversation on the water tower, it becomes obvious that some of Cloud’s motivations towards becoming a hero were to impress Tifa. Tifa mirrors these feelings asking him to come save her should she ever be in trouble.

She sorts him out with a rent-free place to live, helps him get work despite his awful attitude and has the patience of a goddess to put up with our awkward protagonist. When Cloud shows up in Midgar, he is not how Tifa remembers him. Yet she still puts him first and when we get the sequels, you’ll see just how devoted Tifa is when it comes to helping Cloud. Whenever Cloud tells the party to go on ahead and he’ll catch them up, Tifa shows up at the right time to save him. She’s a gift from heaven!

Finally, just like with Aerith, Tifa is an absolute badass. She is a martial arts master with genuinely character development rooted deeply in a tragic backstory which all revolves around what Cloud went through. The two feel connected so deeply, you can’t help but absolutely love it. 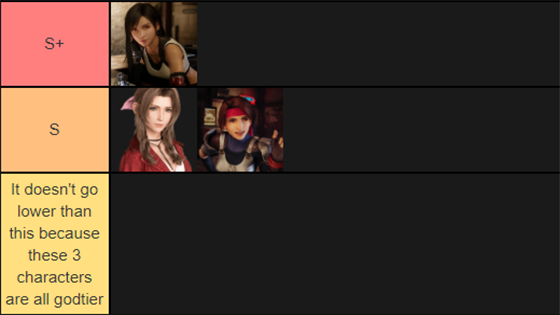 I place Tifa a single placement above the other two and that is most likely because of my own bias towards the character. I’ve loved Tifa before she looked the way she currently does, so it only makes sense. However, Aerith is so fantastic in this game. They’ve given her these rough edges, which have only made her shine even more. I’m currently deep down the Final Fantasy VII Remake theory rabbit hole, and if some of the stuff in my head about Aerith holds true, this character is going to tug at our heartstrings more than ever before. Lastly, Jessie is the most improved upon character from the original. They did an outstanding job with her personality and really made her standout to the point where the conversation isn’t just about Aerith and Tifa anymore. It’s about the three of them.

Ultimately, I would happily take any one of these three wonderful ladies home to my mother.

When is Final Fantasy VII Remake Part 2 going to come out?

Already beaten FF7R? Check out our hard mode tips and give it a go!

What we want from the new entries...