Vocaloid is the singing synthesizer that took the internet by storm with increasing popularity each year since its creation in 2004. Arguably the most popular and iconic of the mascots is the titular Hatsune Miku, whose Project DIVA games have found success through each installment as solid, re-playable rhythm games.

Vocaloid has introduced many music and anime fans to talented producers, such as the late and great wowaka, now mainstream songwriter of J-pop band supercell, ryo, and renowned group HoneyWorks. MegaMix has a strong track-list reflecting such talent, perfect for both new and old fans to discover new favourite songs, and alongside such stellar presentation and animations, these are only a few reasons as to why MegaMix proves to be yet another hit in the Project DIVA series.

What’s new in the MegaMix?

As the first Project DIVA game to grace a non-PlayStation console and the first for the Nintendo Switch, Hatsune Miku: Project DIVA MegaMix stays faithful to the series’ successful rhythm mechanics, as well as adding a new and exclusive play style to the Switch. Players can choose between two modes, the Arcade mode, or the Mix mode. The Arcade mode requires button inputting most of us will already have experience with thanks to previous installments of the series, while the new Mix mode makes use of the Switch’s motion controls, requiring the Joy-Cons to be tilted to correspond with either blue bars as the left Joy-Con, or red bars as the right Joy-Con.

The mix mode offers this additional gameplay to quite literally stir up the genre’s staple gameplay, making for a welcoming new challenge for those already familiar with rhythm games or Project DIVA titles. The other notable additions Mega Mix implements are 10 new songs currently exclusive to the Switch entry, and being the first title in the series to include the T-Shirt Editor feature, a mechanic that allows for even more customization than previous installments have seen!

There has been a noticeable improvement in the game’s music videos and art style, as Hatsune Miku and co. have never looked so crisp before, with cell shaded visuals that make music videos like “Decorator” pop with all the Visual idols dancing in perfect rhythm alongside each other on the illuminating stage. The main menu of the game is simple yet clean, with the introduction screen showing players exactly what they are in for with bright, colorful designs and an upbeat theme song. In fact, the game’s sound theme “DIVA Arcade Ver.B” kept me on the screen to explore the many options the game has to offers, with even the choice in changing the sound theme to previous installments of the series, such as the PlayStation 4 exclusive “Future Tone”, and the original arcade’s “DIVA Arcade”. What lovely throwbacks to stumble upon!

Hatsune Miku: Project DIVA Mega Mix has many features both old and new to keep players engaged. There is the hidden Tap Play option under game/control config that adds yet another gameplay option which is an especially lovely inclusion for gamers who play mostly in handheld mode and on the Switch Lite. This can be compared to other Switch rhythm games such as VOEZ, and from the only other Nintendo title available for Western Project DIVA players in the 3DS game Hatsune Miku: Project Mirai XD. Another notable option players may miss is the Melody Icon Display option in game/control config that can be set to the PlayStation input which can be a game changer for players accustomed to the previous installments on the PlayStation 3 and PlayStation 4.

The game offers a music video watcher and customizable set-list for those wanting to kick back and enjoy the animations and songs in order or shuffled without any gameplay distractions. MegaMix quite helpfully includes the function of a favourite system, as selecting the songs you love will allow for quick choosing when players are seeking to play for a few minutes. And considering the game has an immediately available 101 playable tracks, it’s easy to initially feel overwhelmed with all the choice! And with the purchase of DLC, the amount of tracks reaches a total of 141.

Customization in MegaMix is a stand-out aspect of the game, with over 300 unlockable costumes and accessories, and even features the exclusive T-shirt designer mechanic which takes advantage of the Switch’s touch screen. There are 5 save slots for created T-Shirts, and all 5 can be fitted onto all characters. For those who also unfortunately suffer from un-creative genes, VP obtained by clearing songs can be spent on a range of officially edited T-Shirts designed by artists and contest winners.

As first mentioned in the introduction, replayability in the DIVA games is never a problem, as players will enjoy coming back in hopeful and hard working attempts at achieving as close of a perfect 100% score as they can. Players can then spend their hard earned VP on unlocking the many modules of their favourite Virtual idols to perfect each music video with its corresponding Vocaloid module.

The game offers even more optimisation depending on player’s preferences, as the range of difficulty options consist of easy, normal and hard. Additionally in Arcade mode only, there are the unlockable extreme and extra extreme modes once a hard mode has been cleared for a track. For those blessed and talented rhythm doers who want even more of a challenge, there is the fail mode option, and game modifiers consisting of hi speed, hidden and sudden features. These features keep each and every revisit of favourite tracks appealing as players can deem them as additional tasks worth attempting and excelling in, much like other rhythm games such as the Persona Dancing titles.

As for the all-important track-list, there has been a notable inclusion of 10 songs never before included in a Project DIVA game (that is until its DLC arrives for the PlayStation 4’s Future Tone!). livetune’s “Catch the Wave” is the main theme of the game and with a stunningly vibrant, world travelling music video to accompany Hatsune Miku’s energetic vocals, it proves difficult to get the tune out of your head. Not like anyone could complain about that! “HIBANA” is another stand out in the new arrivals, as one of producer DECO*27’s most famous Vocaloid songs, its emotional and turbulent meaning behind its lyrics of a relationship gone sour with a theatrical music video is breath-taking.

Speaking of the music videos, Mafumafu’s “Jigsaw piece” and emon(Tes.)’s “Dreamin Chuchu” have retained their original unique and colourfully illustrated videos, with the latter being extremely memorable as it plays out perfectly with the bouncy beat and taps of the notes. The tracks “Alien Alien” by Nayutalien, “39 Music!” and “ROKI” by mikitoP, “Teo” by Sakurai, “Oodeo Julianight” by Mitchie M, and “JitterBug” by Nanashi Hachiya are the other greatly appreciated songs to hit the tracklist.

As a player who missed out on the PlayStation 4’s Future Tone, seeing personal favourite songs and music videos on the big screen from the highly emotional “Rolling Girl” by Wowaka, to the bittersweet “Just Be Friends” by Dixie Flatline and finally with the hard hitting “palette” by Yuyoyuppe were highlights in my experience with the game. Having become gratefully exposed to the wondrous world of Vocaloid years ago, there is something undeniable in the joy felt when first being exposed to the original songs and videos on platforms such as YouTube. To then re-experience that exciting discovery by witnessing the game exclusive music videos that accompany each song for visual flare is a personally exciting experience each time a new Project DIVA title releases.

As a stand out in the Project DIVA series with its notable additions of customisation options, MegaMix is welcoming to newcomers with accessible and adaptable difficulty, and for fans who are craving a new experience in the series with the exclusive Mix mode. With its crisp presentation, and over 100 songs available as soon as you boot up the game, Hatsune Miku: Project DIVA MegaMix makes for yet another brilliant rhythm game for the Switch’s library that is worthy of your time, attention and dedication. 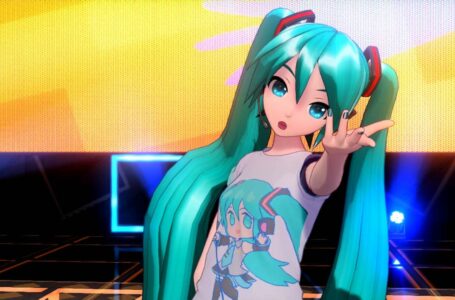