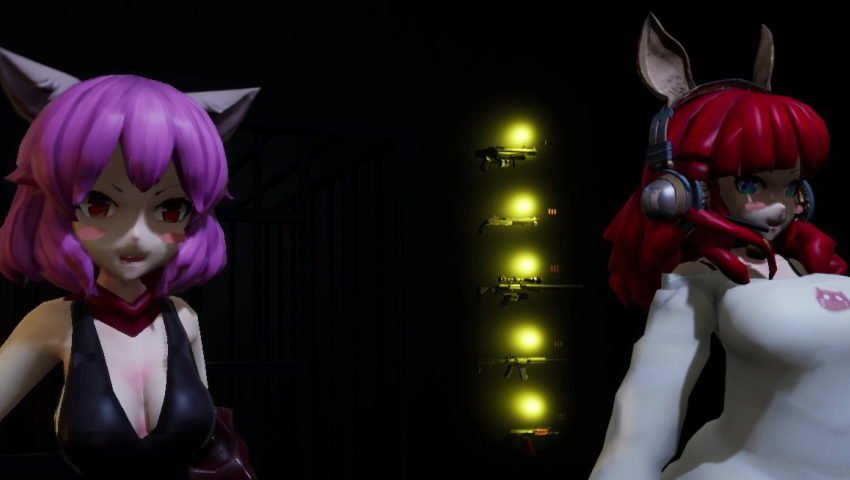 Secondly, the footage of the game they showed actually looked rather fun. So I was curious: did this game already exist on PC, like many of eastasiasoft’s other console titles?

It most certainly does, and for just £3.99, too. Clearly I needed to check this out. For science, you understand.

The game looks lovely and has a sense of style to it; it eschews conventional anime-inspired visuals in favour of adopting the distinctive soft-edged, motion blur-heavy look of Unreal Engine games with a non-realistic aesthetic. The environments are primarily built in a colourful low-poly style, which is a good fit for the game’s straightforward action. And the player character models are very nice indeed; there’s a rather plasticky, doll-like look to them that works particularly well when combined with the soft edges of the game’s presentation. The net effect is one of a toybox coming to life rather than anything which should be taken too seriously — and that pretty much sums up the Hentai vs. Evil experience.

After a few frustrating initial attempts, you’ll start to notice a few things.

The sprint function is of critical importance, because your standard movement allows zombies to catch up with you quite easily. As such, sprinting is essential to get yourself into a good position to fend off an incoming horde; it provides a surprisingly tactical element to the gameplay that, when coupled with the varied and interesting environments, keeps things feeling enjoyable.

Secondly, there are floating toolboxes all over the place. Collecting these causes one of two bullet pickups to appear: yellow bullets ignite your enemies on fire, inflicting continuous damage over time when you shoot them, while blue bullets do a massive amount of damage and inflict considerable knockback, usually finishing off an enemy with a single shot even from the machine gun-style weapons. Both of these power-ups last for a limited amount of time, with the flaming shots lasting significantly longer than the power shots.

Thirdly, there are health pickups here and there, though more sparsely scattered than the toolboxes. Collecting one of these immediately restores you to full health, even if you’re near death.

And finally, the relatively small clip sizes and long reload times for all the guns mean that you can’t just wade into a huge group of enemies and fire with gay abandon; you’ll need to pick your targets and vantage point carefully.

Completing each of the main levels for the first time unlocks a new character for play, and each character can be customised in terms of costume, hair colour, skin colour, headgear, breast size, thigh thiccness and overall scale. It would have been nice to have a few more customisation options — some unlockable costumes would add some replay value for sure — but let’s not forget this is a game that costs four quid on PC and as such the amount of stuff we do get here is already quite admirable.