Here at Rice Digital, we love a good sidekick. Even better if they are part of the rival-turned-sidekick trope. And in the world of shounen anime, there are few better examples of this than Kazuma Kuwabara from Yu Yu Hakusho. He’s big and dumb and has a heart of gold while still having a rebellious streak to match his rival’s.

Everything we could want from a Hump Day Husbando. So, this week we’ll be taking a look at our favourite spirit-sword wielding teenage delinquent.

Kazuma Kuwabara is present from the start of Yu Yu Hakusho as the main challenger to Yusuke Urameshi’s title of Toughest Guy in School. The two’s fights are one-sided, however, as Urameshi can beat down his rival in a few blows every time. This doesn’t stop Kuwabara from trying, though, insisting that one day he will surpass Urameshi (spoiler: he won’t).

When he isn’t getting his butt handed to him, Kuwabara is also the leader of a gang of hoodlums that do unspecified crimes around the school and surrounding neighbourhood. He possesses an unusually strong code of honour, which makes his life difficult at times, and an awareness of the Spirit World even before he knows that it exists.

This natural toughness and sensitivity toward spiritual energy eventually leads him to team up with his rival to fight all manner of monsters and demons as the series progresses. Eventually the two come to a mutual friendship and readily turn to each other for help to protect the world from the demons waiting just out of sight.

Kuwabara is modelled heavily after the classic Japanese biker-thug trope. His pompadour hair style and his habit of binding his abs in anticipation of getting a few ribs cracked all pay homage to a 1950s version of the bad boy, even if he himself is the kinder and gentler of the school-aged demon fighters. Even his weapon of choice, the Spirit Sword, is likely a reference to Japanese bikers of the 50s, who were rumoured to use wooden swords as weapons.

He commands the respect of his gang through his unwavering loyalty to them and is willing to put his body on the line to protect them. He is a hopeless romantic, falling in love with ice apparition Yukina at first sight and charging off to save her while wearing his “Fighting Headband of Love”.

Despite his tough guy exterior, Kuwabara is just out there doing what he feels is right, setting him up as an unexpected foil to Urameshi’s selfish mindset at the start of the series.

Simply put, Kuwabara is a himbo. He is a big, dumb sweetheart who puts on a tough show for the world. He has a flair for the dramatic, showing up to take part in the Dark Tournament wearing a long white coat with his family name emblazoned on the back of it. Despite their initial rivalry, Kuwabara eventually becomes Urameshi’s staunchest ally, proving that you don’t need to be smart to be a good and loyal person. (Whew, there’s hope for me yet – Ed.)

Though he often serves as the butt of the joke throughout the series, never being quite as strong as Yusuke or as smart as Kurama, he is always a man of action, diving into danger without hesitation to protect his friends and the people he loves. I’d highly recommend checking out the dubbed version of the show. Though the entire cast puts in a great performance, it is easily one of my favourite roles from Christopher Sabat.

If you’d like to give Yu Yu Hakusho a rewatch or are looking to catch it for the first time, you can see both the subbed and dubbed episodes on Funimation. 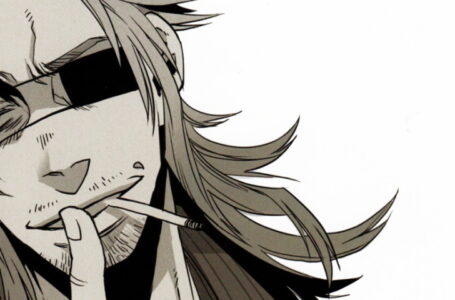