It’s fair to say that HuniePop 2 was an eagerly anticipated game. After all, the first HuniePop was fantastic — and I’m not sure if anyone expected it to be.

Initially conceived as a direct response to the growth in quasi-Puritanical attitudes towards sexualised content in video games in the first half of the 2010s, the game went on to secure over $53,000 on Kickstarter — over twice its original goal of $20,000 — and eventually released to great praise, having clearly been a labour of love for its creator Ryan Koons.

HuniePop’s strength was its near-universal appeal; while it featured an anime-style aesthetic, it also featured a foul-mouthed and distinctly western script. It didn’t try to recreate anime tropes in an English-first experience; instead, it demonstrated a knowing awareness of them, often subverted them and poked gentle fun at them without being outright mean about it. Despite its origin as a sort of “protest game” with something very specific to say, it ended up being a very inclusive experience — and its enduring popularity ever since its release in 2015 is testament to that.

HuniePop 2 has been a long time coming. Expectations were high, and Koons was keen to live up to those expectations rather than simply pushing out a lazy sequel. He should be praised for that — but dear Lord he kept us waiting! Thankfully, HuniePop 2 was emphatically well worth the wait.

HuniePop 2’s premise is rather different to the first game. Following directly on from the events of the first game, where the love fairy Kyu successfully took you from lonely loser to swaggering stud, this time around you’re tasked with saving the world from the dreaded Nymphojinn, a pair of ancient entities who only wake up when they’re suffering from terrible PMS. Unfortunately, when they wake up in this way they have a habit of destroying most of existence fairly indiscriminately, so it’s up to a hero to save the day!

In order to facilitate matters as smoothly and effectively as possible, Kyu takes you on a “work outing” to the idyllic tropical island Inna de Poona. You’re tasked with two things: establishing as many pairs of girls as you can, and then having your wicked way with them to earn those all-important fairy wings.

After an introductory sequence, during which you get lucky with Lola, a returning character from the first HuniePop, you’re left to spend your time on the island as you see fit. Similarly to the first HuniePop, gameplay consists of moving between locations to encounter different characters — or pairs of characters in this case — and then interacting with them.

There are two — sometimes three — main steps to the interaction process in HuniePop 2. Firstly, you can spend some time chatting with either or both of the girls, during which time you can find out information about them such as their likes and dislikes — and, once you’ve progressed a little in the game, their “Baggage” that you’ll need to take into account while continuing to pursue them. During these initial conversations, you can also buy and present the girls with gifts; making suitable choices here can improve your experience level in a variety of areas, which can make the game’s core puzzle gameplay a little easier — or, to be more exact, keep pace with the challenging difficulty curve a bit better!

The girls have a limited amount of stamina; chatting with them or presenting them with gifts reduces this value, and once it’s empty you won’t be able to talk to them any more. However, if you invite the pair of them on a double date, they’ll rally and gain a little stamina, at which point you enter the second part of the interaction: the puzzle gameplay.

HuniePop 2’s puzzle action unfolds as a “match-3” game with a bit of a twist. Instead of simply swapping adjacent icons with one another as in longstanding classics like Bejeweled, in HuniePop 2 you can grab an icon and then move it anywhere in the row or column it started in, with the other icons in the row shifting accordingly. This gives you a lot more flexibility without making things feel too easy — and you’ll also have to be very careful that you don’t create undesirable matches while moving the icons around.

In order to succeed in HuniePop 2’s puzzle sequences, you must build up the pair of girls’ affection meter to its maximum level before you use up all of your moves. There’s no time limit or any other mechanic putting pressure on you, so you can think about each move carefully — and you’ll need to!

The four main coloured icons on the puzzle grid represent flirtatiousness, talent, sexuality and romance, and each character has a favourite and least favourite colour. Match their favourite colour and they’ll gain significantly more affection; match their least favourite and they’ll gain the bare minimum. Besides these colours, you can match hearts to increase their Passion rating, which makes the meter easier to fill; match tear-shaped Sentiment tokens to be able to use special items for various effects; or match bell-shaped Joy tokens to obtain additional moves. New to HuniePop 2 over the original are pentagonal Stamina tokens, which, as the name suggests, restore a girl’s stamina.

Yes, Stamina comes into play during the puzzle action, too. Each match you make drains a certain amount of stamina, with more valuable matches taking more stamina. If a girl runs out of stamina, they’re out of action for several turns while they “recharge”; if both girls are exhausted at the same time, you fail the puzzle sequence. In order to prevent this from happening, you’ll need to regularly switch your “focus” between the two girls so that, ideally, neither of them become exhausted at any point.

You’ll also need to watch out for the broken heart tokens; if you make a match with these, the girl you’re focusing on will become angry, which has the same effect as her being exhausted, only with more swearing. Consequently, you can also fail the puzzle sequences by making both girls any combination of angry and/or exhausted.

Succeed in a puzzle sequence and you’ll be rewarded with fruit-shaped tokens that represent each of the four main traits. These can subsequently be spent on gifts to be given to the various girls, or items that can be used during puzzle sequences using the Sentiment tokens. Everything fits together beautifully, and the game, much like its predecessor, is delightfully elegant in its thoughtful design and solid execution.

As you progress through the game, more and more characters will be introduced, offering the possibility of different pairings. Successfully build up the relationships between the various pairs and you’ll have the opportunity to enter a “bonus round” after the main puzzle sequence, during which you need to make as many matches as possible as quickly as possible in order to provide adequate… gratification to your partners.

Win this sequence and you’ll get a piece of lewd artwork to add to your collection — in the GOG.com release of the game, undies stay firmly on, but the versions available on all other platforms (including Steam) provide an “uncensored” option including genitalia and bodily fluids. (It’s probably worth noting at this point that, like in the original HuniePop, you can play as a female character in this game, which means during these scenes one particular bodily fluid will not be present. In unrelated news, the GOG.com release can be easily uncensored with instructions on the game’s official site.)

The more you play, the more you get to know the various girls. The new Baggage mechanic for HuniePop 2 adds an interesting layer that wasn’t present in the original — not only does it provide a means of revealing some interesting “secrets” about each of the girls, it also has a mechanical impact. For example, the character Ashley reveals that she suffers from terrible allergies, which means that she can’t accept gifts of flowers or candles unless she’s too exhausted to complain about them. The further you go, the more pieces of Baggage you’ll reveal, meaning the game gets more mechanically complex and interesting as you progress — this is probably the biggest improvement over the original.

Alongside this comes the fact that the characters are much more well-realised than in the previous game. Although their humorous descriptions on the game’s various promotional store pages make them all sound like simplistic stereotypes — and your first impressions of them may well appear to line up with those stereotypes — they each gradually reveal themselves to have hidden depths, both through your interactions with them, and their interactions with one another.

None of them can be boiled down to a simple description such as “the one who swears a lot”; instead, they all feel very much like real people you might come into contact with — albeit perhaps with a bit of comic exaggeration here and there. And the voice acting is absolutely on point, too, with the characterisation in the writing supported well by some excellent delivery in a pleasingly broad range of accents from around the world!

Ultimately it’s safe to say that if you enjoyed the first HuniePop, you will very much like HuniePop 2, because it offers more of the same — but better. Much, much better. The first game is still worth playing — if only to have the chance to get to know the fairy Kyu a bit better, since she claims she’s no longer allowed to jump into bed with her clients in this one — but HuniePop 2 improves on it in almost every way.

In short, it’s a triumph that was well worth the wait. And I’m sure you all know how good it feels to finally get to enjoy something you’ve had to wait a long time for! 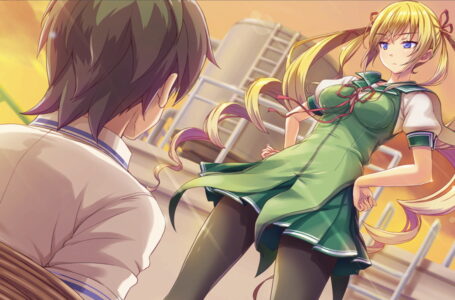 Gal*Gun Returns and HuniePop 2 give two...