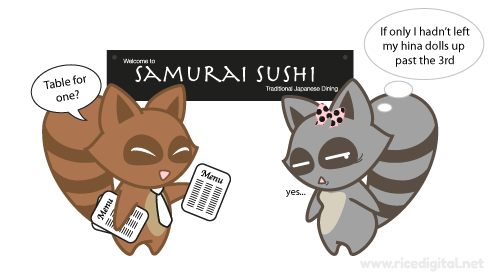 March 3rd in Japan is the day of Hinamatsuri or ???. Commonly known as ‘Girls’ Day’, Hinamatsuri is the day when families pray for and celebrate the happiness, prosperity and health of the girls in their lives. To celebrate, families will display ornamental dolls called hina ningyo in the best room of their homes to wish girls good fortune.

Traditionally, parents or grandparents will buy or pass down hina dolls to a newborn girl.

Hina Ningyo Altar
The hina dolls are placed on a seven tiered platform called a hina dan which is covered in a red carpet with rainbow stripes at the bottom. The dolls are placed in a particular order and the full display represents a spring wedding at the imperial court of Heian. The dolls themselves are usually made of wood, dressed in silks and accessorised in great detail!

The top tier holds the Emperor and Empress.

The Emperor is commonly placed on the viewers left holding a ritual baton, while the Empress is to the right holding a fan. The Empress wears a juunihitoe which is a beautiful 12 layered dress made of rich silks.

As tradition in a Shinto wedding, the Court Ladies are there to serve dairi bina sake.

A necessity for an imperial wedding. From left to right they play;

A small drum called a Taiko

A Large drum called a ?tsuzumi.

A Hand drum called a Kotsuzumi

A Flute called a Yokobue

and finally the Singer known as a Utaikata, who holds a folding fan.

Known as the three drinkers. From Left to right they are; the cheerfull drinker, the sad drinker and the angry drinker.

Finally, the sixth and bottom tier holds a variety of miniature furniture.

Like the dolls, food is also an important part of Girls’ day and Japanese families and friends during the festival will eat a variety of different foods.

The most common foods eaten on Girls’ day are:

Hishimochi
A diamond shaped sweet rice cake. It is traditionally placed on the stand with the dolls and consists of three layers coloured pink, white and green.

Sweet rice crackers that are made from puffed rice and are coloured green for the spring grass, white for the disappearing snow, and pink for the peach blossoms.

A cloudy, very sweet, sake made from fermented rice. Sake is usually alcoholic however Shirozake is made to be non-alcoholic so it is okay for children to drink.

A sushi dish served in a bowl that is usually topped with colourful ingredients. Recipes tend to differ from family to family but it normally contains rice, vegetables and fish like shrimp or squid.

Like the Hishimochi, Sakuramochi uses the same type of sweet rice with sweetened bean paste which is rolled in a sakura (Cherry blossom) leaf. The Sakura leaf is edible.

A light soup made from clams. The soup contains a set of joined clams that represents the bond between husband and wife, perfectly joined together.

Traditionally, Hinamatsuri was used to teach girls about marriage and marriage etiquette. Families will display the dolls in february and take them down immediately after the festival.

because if they don’t, superstitions say that leaving the dolls up past March 3rd will result in a late marriage!!