Jeff Minter is someone who gamers of a certain age will, without a doubt, love and respect. He’s someone who’s been involved with gaming pretty much since the beginning of time, and someone who is passionate about game design as an art form and a medium of expression. And, rather remarkably, he’s actually still making games for today’s modern platforms — with PlayStation VR proving especially fascinating for him in recent years.

Minter is also an outspoken commentator on the less desirable practices that have been encroaching on modern gaming for the last 10-15 years or so. And, just recently, he posted an exceedingly sensible and beautifully withering rant on the latest fad to hit the gaming space: the use of blockchain and NFT technology to create what is obnoxiously known as “play-to-earn” games.

You can read the whole thread over on Twitter, but for your convenience we’ll provide the most important parts and our own commentary here — because this is something that is relevant to all of us. More on that in a moment.

“THINGS I WANT TO DO IN VIDEO GAMES:” Minter opened. “Fly a plane or a spaceship. Race cars. Play crazy golf. Shoot aliens, robots or people who are trying to shoot me. Explore planets, trip out without having to take any actual drugs. Be good at sports I’d be shit at IRL, be good at sports that couldn’t exist IRL. Build things I couldn’t IRL. Planes. Cars. Cities. Space programs.”

Minter, here, is neatly summarising the reason that many of us play. To some, this is summed up as “escapism”, but that’s not quite an accurate description. Rather, playing games allows us to explore possibilities that are impractical or even impossible for us to do in reality — this ranges from more mundane situations that we see in adventure games and visual novels right up to spectacular battles to determine the fate of the world in the most epic of RPGs and action-adventures.

“If I fail at any of these things it’s OK, it doesn’t matter,” Minter continues. “That’s kinda what play is, a way of letting us try out risky scenarios without any real danger to us. It can be educational, it can be exhilarating, it can be enjoyable even if we fail.”

The idea of “it’s okay to fail” is baked right in to a lot of games, and always has been. Older games in particular are designed around the idea that you will make mistakes, learn from them and be able to progress a little further each time you try — and many modern games, with the most obvious examples being FromSoftware’s Souls games, take this idea and apply it to more modern tech. It can even be argued to be part of the most popular multiplayer games out there — you won’t top the leaderboard for a match without putting in a bit of effort to get good.

An extension to this idea is that games allow us the opportunity to explore fantasies that it really wouldn’t be a good idea to look into too closely in the real world. This is especially relevant to us here on Rice when we consider titles such as visual novels or adult games with sexual content or sexual violence in them. Games like this allow us to understand these things without actually causing harm to anyone — and, in many cases, for the game’s creators to provide their own commentary on them, again without doing any actual harm.

As Minter says, it can be educational and exhilarating, and your average human being is able to distinguish between fantasy and reality sufficiently to know that the things you see and do in video games are not things you should be doing in reality!

“How do you ruin play?” Minter continues. “By making it too meaningful. By making it have undue impact in the real world. That’s why gambling is dangerous, because it has the shape of playing, but failing is real.”

Here, Minter is speaking specifically about gambling, but this also applies to modern trends such as lootboxes and gacha games. There are all too many people out there who have found themselves spending vast amounts of money on titles such as FIFA and Genshin Impact if they didn’t immediately get the sweaty footballer and/or pretty waifu they wanted — and that’s where things start to get a bit dangerous.

The moment a game starts to have an impact on the real world — usually by making you reach for your credit card — that’s when it stops being something that is “just for fun”. That’s when you should start looking very carefully at how it’s potentially manipulating you; to convince you that you’re “enjoying yourself” when in fact you’re just feeling a fear of missing out on the latest shiny waifu or whatever. And blockchain games threaten to really exacerbate that feeling.

“THINGS I DON’T WANT TO DO IN VIDEO GAMES:” Minter continues. “Business. Work. To view other players I might meet as ‘business opportunities’. To construct fucking pyramid schemes on the Godforsaken blockchain. To feel in-game as I do in life, that every unsolicited contact I have with anyone is because they want to extract money from me.”

Minter here is specifically referring to the recent announcement that Peter Molyneux, formerly of Bullfrog and Lionhead and more recently responsible for the notoriously stupid and terrible Godus (which is somehow still available on Steam) and Curiosity: What’s Inside the Cube?, has announced his new game. And it’s a “blockchain business sim” called Legacy.

Legacy is particularly offensive in that it does all the things that Minter is describing above — most notably encouraging its players to see one another as little more than business opportunities, and fostering a community of players who think “play-to-earn” is in any way a good idea.

The game’s announcement blog post even describes what is pretty much a literal pyramid scheme, whereby owning a “Land NFT” in the game will allow you to lend “Legacy Keys” to other people in the game, making them your in-game business partners and allowing you to share in their Ethereum-based cryptocurrency profits.

“We have enough capitalism for one lifetime in actual life without trying to inject it into the places we go to fucking escape all that shit,” Minter continues. “Buying a game and maybe some DLC should be the sole involvement of RL capitalism in play spaces outside of designated gambling areas.

“So no, that shit isn’t ‘the future of gaming’,” he adds, “it’s simply a bunch of cunts, some of whom are old enough and ugly enough to damn well know better, trying their best to lure players out of safe play spaces into areas where they can profitably be preyed upon.”

You may wonder exactly how this is relevant to us here on Rice Digital, since you will have undoubtedly noticed that the majority of pushing towards cryptocurrency, blockchain technology and NFTs has come from the west.

But, unfortunately, that does not mean our friends in the east are immune. A distressing number of Japanese artists — including the legendary Mel Kishida, of Atelier and Blue Reflection fame — have started selling their creations as NFTs. And while a Mel Kishida original (or a receipt to a Mel Kishida original, anyway) is certainly better than one of those dumb shit monkey avatars, NFTs are still a load of old crap that attempt to solve a problem where none exists.

On top of that, it should be plain to see how NFTs could be implemented into games with a strong collection element such as gacha titles.

Ubisoft has already started adding NFT cosmetics into its Ghost Recon Breakpoint game — with one requiring more than 600 hours of playtime to acquire for free but limited quantities available, presumably with the intention of jacking up its value for those who wish to sell it.

It’s not a stretch to imagine a future where a Genshin Impact or Granblue Fantasy wannabe distributes characters as NFTs, allowing players to buy, sell and trade them on the blockchain, potentially pricing many “free to play” players out of the market altogether.

In a game with collectibles, the ability to buy, sell and trade isn’t necessarily a bad idea. But as Minter says above, it’s the intent of the whole thing that leaves a bad taste in the mouth — as soon as playing and enjoying a game in your free time becomes more about trying to make as much real-world profit as possible, it not only becomes a form of work, it becomes a means through which more vulnerable or less savvy people can end up getting exploited and preyed upon.

Combine this with the notoriously high energy costs and environmental impact involved in maintaining the blockchain — to say nothing of how much of a pain in the arse it’s made buying a new graphics card these days — and it should be abundantly clear how this is not something anyone should be celebrating as “the future of gaming”.

This is a storm we’re going to have to ride out for a little while until the fad passes, I feel. In the meantime, be extra-sure to support your favourite developers and publishers who aren’t jumping on board with this nonsense — they need your support more than ever right now simply for trying to be appropriately rewarded for their hard work without resorting to any sort of underhanded means! 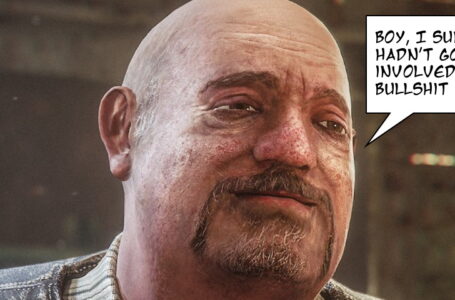