Popular independent VTuber Kson, who has absolutely nothing to do with any other popular VTuber who graduated a while back, honest, has stepped up her streaming game with an awesome new Live2D model.

Not that anyone doubted this, I’m sure, but it seems like she’s deadly serious about building her independent VTubing career — a Live2D model is a significant investment at the best of times, and when it’s as elaborately rigged as Kson’s new one, you can bet that this wasn’t cheap!

Still, her audience seemed to appreciate it — her “re-debut” on October 16, 2021 has attracted 656K views on YouTube as of the time of writing, and the live broadcast had a very active chat featuring both Japanese and English-speaking fans. Since then, the video has also attracted a variety of supportive comments — many of which are in English — as well as an impressive like to dislike ratio of 66,000 likes to just 268. Not bad at all, especially considering Kson, regrettably, has a few enemies out there.

Kson’s new model is heavily inspired by both traditional Japanese clothing and her love of the Yakuza series; its default pose has her squatting with a wooden sword over her shoulder in a style often seen in Japanese gangster media. This style of “Slav squatting” is known as “yankii zuwari” or “unko zuwari” (literally “yankee sitting” or, uh, “poop sitting”) and is typically used as a visual trope to introduce delinquent characters; interestingly, it’s generally associated with male characters, so Kson’s obviously female avatar making use of it makes a powerful statement.

Kson’s new visual design is the work of yaman**, who just happens to be the same designer who originally brought us the distinctive design of the dearly departed Hololive member Kiryu Coco. Her impressive rigging, meanwhile, is the work of Kanbutsu Himono, who is a VTuber herself as well as being a professional Live2D animator. Himono also hosts English-subtitled Live2D courses on her YouTube channel, so if you’re interested in getting involved in the field yourself, it’s worth giving her a subscribe.

Kson’s new avatar features several different poses and variations on her outfit. She’s able to take her jacket off, for example, as well as put her hair down and remove her glasses. She can also stand up straight rather than being stuck in her yankii zuwari pose all the time — I’m envious, ’cause I feel like if I got down into that pose, I probably wouldn’t get up again — as well as wield or put away her sword. Very lovely stuff.

In true VTuber tradition, Kson has adopted a new nickname; while she was previously known as “Kumichou”, now she has adopted the nickname “Souchou”. Both of them mean something along the lines of “boss” — particularly in a yakuza context — but the adoption of a new nickname marks the beginning of a new era for Kson.

Traditionally, Kson has broadcast using a mix of both her VTuber avatar and her real appearance — in some cases even combining the two in particularly memorable fashion. Since her “redebut”, she has only broadcast using her new avatar — understandable, since she’ll want to show it off! — but at the time of writing it remains to be seen if she’ll keep doing “webcam” streams also. They’ve always been a popular and iconic part of her online identity, so it would be a surprise to see them stop — but we’ll have to wait and see.

Kson’s new look also coincides with her making merchandise available for the first time. In English-speaking territories, you can pick this up via her Geekjack store; available merch includes acrylic panels and stands, face masks, badges, T-shirts and posters. Buy the whole set and you’ll get an autographed postcard, too — but you’ll need to be quick, since the collection is apparently only available until October 31, 2021.

Kson is closing in on a million subscribers as of the time of writing. If you’d like to join them, head on over to her YouTube channel and sign on with your new Souchou; I’m sure she’ll be happy to have you! 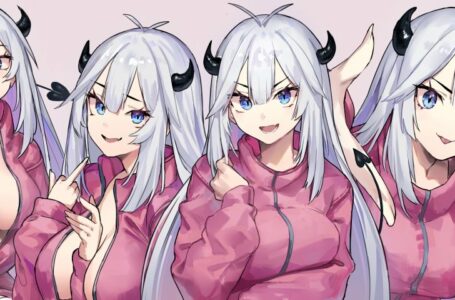 Haruka Karibu shares her story of how...

Is Nijisanji EN moving too fast?