I’ve done the One Piece Waifu Review. I’ve done the Bleach Waifu Review. There is only one member of the Big 3 left but honestly, Naruto waifu’s aren’t really that great. Don’t get me wrong, I don’t think the female characters of the Naruto universe are all bad, however none of them really stand out to me. In my opinion, this is a fault in Kishimoto’s character writing when it comes to his female characters. Remember when Sakura was really cool in Shippuden after beating Sasori, to then just be put on the back burner again awaiting the next “Sasuke-kun” line.

There are some great girls for sure: Hinata really starts to become her own in the Naruto: The Last film. Tsunade has always been a favourite of mine. And the 5th Mizukage, Mei Terumi, is waifu as hell! Problem is that my list kind of ends there.

So, me being the genius writer that I am, I decided that it’s time for the boys to shine! That’s right, it’s a husbando review, baby! Naruto most definitely does not suffer when it comes to the male characters, so let’s get into it! 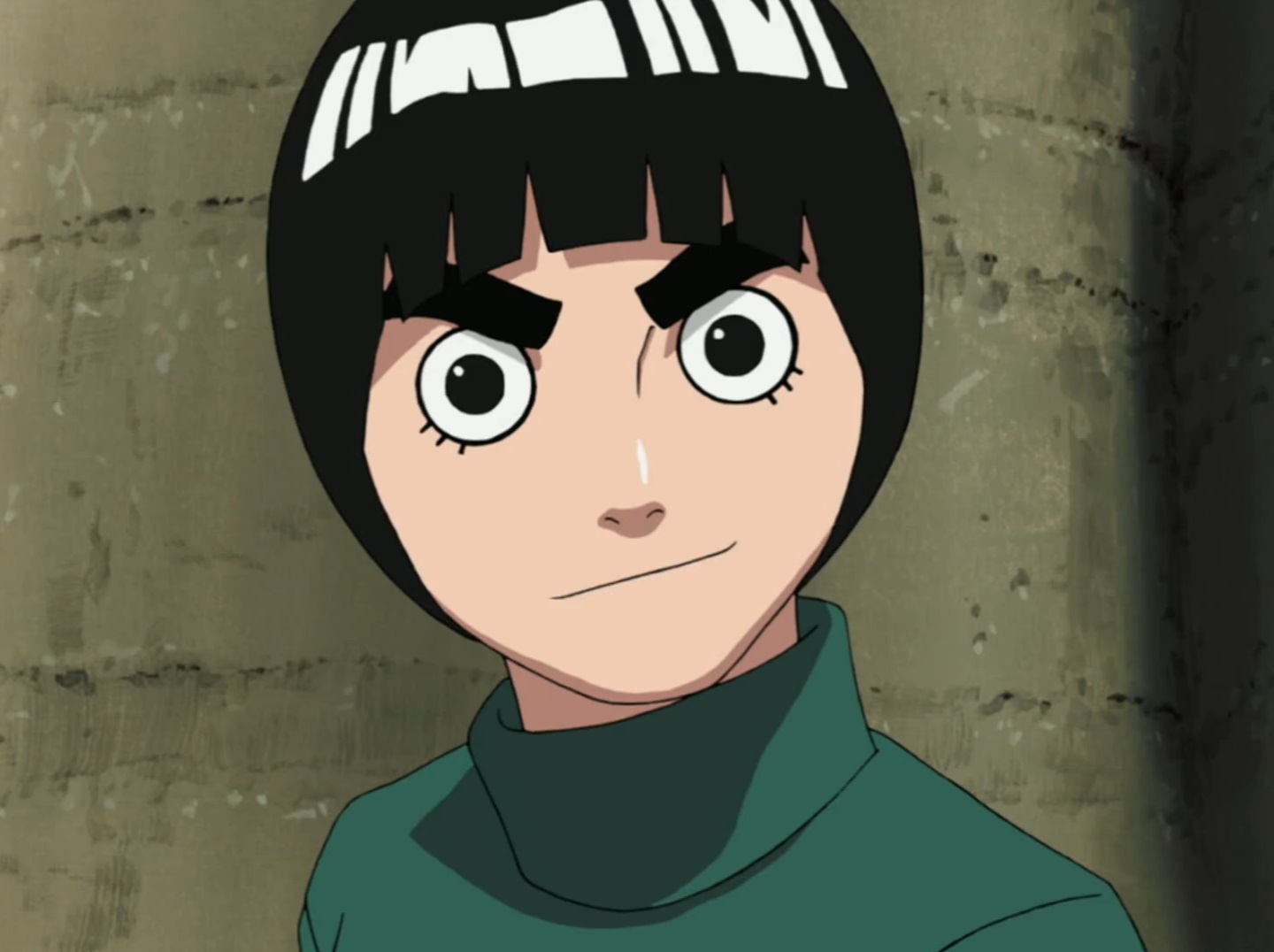 There’s no way we could possibly leave Rock Lee off of this list. Naruto had some good fights, but it was during Rock Lee vs Gaara that I think most fans will have been surprised at what they were witnessing on screen. The flex of Lee dropping the weights, the music, the sakuga animation, and the incredible look of fear and surprise on Gaara’s angsty face.

Lee is a character who doesn’t have access to either ninjutsu or genjutsu, therefore he spends all of his time and energy working on his taijutsu, earning the title of taijutsu specialist. These kinds of things about Lee are what also make him endearing as a character. We see this guy who doesn’t have the ability to use what is fairly common amongst other shinobi, yet that doesn’t discourage him, he uses it to strengthen his resolve in his pursuit of taijutsu.

And we absolutely cannot forget that he is the undisputed master of the drunken fist! His fight with Kimimaro, during the Sasuke Recovery Mission, was such a hilariously badass fight. Lastly, at some point we all must come to realise that… Rock Lee is just a beautiful man with a beautiful set of eyebrows.

Sasuke is probably one of, if not my favourite character in Naruto. I’m sure this may disappoint some people, as he is a fairly polarising character, I personally think that Sasuke develops in a really nice way, albeit subtly. From the first moment we meet our emo-deuteragonist, he is this quiet and driven character with a singular goal: gain power and kill his older brother. When I was young, I thought everything about Sasuke was so cool. He had an extremely tragic past and never understood why his own brother did what he did.

He is a character who, despite looking confident in his own strength, suffers with extreme self doubt and is constantly measuring himself up against those around him. He has grown up in the shadow of his older brother, always trying to catch up and meet the expectations his father has for him. Then, at a certain point, he begins to fall behind Naruto. This leads to Sasuke going off the straight and narrow, following a lone path in pursuit of power.

Itachi describes Sasuke as a blank canvas, and that’s definitely something I agree with. Sasuke wants answers. He is a character, who throughout numerous parts of the story, seeks answers. From Obito, Danzo, Itachi, even the Hokages. All the information that Sasuke learns throughout the entirety of Naruto is what leads him to the decision to help out in the penultimate fight. He becomes someone who is accepting, willing to understand when he has lost and lastly, someone who will stop shutting others out.

Naruto becomes Hokage who stands in-front of the people, whereas Sasuke becomes a shadow who protects the Hidden Leaf from threats that the people may have never even realised existed. I have to add, despite my feelings towards Boruto(the series), I love Sasuke’s interactions with his daughter.

In his youth, Kakashi was a bit of an asshole. He believed that succeeding in the mission was above everything else, and if that meant running solo then that’s what he would do. After the tragic events that befall Obito, Kakashi gains a new understanding of what it means to be a Shinobi. Whenever Kakashi becomes the sensei to a new group of genin, he will enforce these laws upon them. “Those who break the rules are scum, but those who abandon their friends are worse than scum”. Kakashi is also an incredibly mysterious character, I mean, his face is literally covered by a mask and yet he has made it onto this list. Looks aside, he was also a part of the anbu black ops during his younger days, an elite group of ninja who work in secret who only recruit the most elite young ninja.

Plus, the whole sharingan in one eye thing is really damn cool, and the fact that he managed to acquire such advanced techniques despite not having an Uchiha’s blood, is so awesome.

ONE THOUSAND YEARS OF DEATH!

I remember when I first started watching Naruto when it was airing in the UK, thinking that Shikamaru is definitely a boring character. In a sea of characters with huge personalities and aspirations and interesting techniques, there was a character who just wanted to be lazy and live a carefree life. Little did I realise back then just how relatable Shikamaru is… Anyway, It was during the Chuunin exams, during his fight with Temari that we start to see just what this character is all about. He is a strategist. Shikamaru thinks carefully, plans numerous steps in advance and won’t execute until he is absolutely certain in himself and his plan.

During the Sasuke Recovery Mission, we get to see that even the Tsunade has noticed just how clever, calm and worthy of leadership Shikamaru is, by placing him as the leader of the group assembled to go and bring their dumbass friend home.

Shikamaru’s greatest moments however, are during his darkest hours. During the Akatsuki Suppression Mission, Shikarmaru’s sensei is killed fighting the immortal member of the Akatsuki known as Hidan. During the timeskip, Shikamaru and Asuma became great friends alongside being teacher and student, so this loss was brutal for Shikamaru. Rather than becoming overwhelmed with rage at the death of his friend, Shikamaru suffers with a crushing depression, after which he prepares a counterattack that not even an immortal would be able to recover from. The Shikamaru vs Hidan fight is one of the single greatest fights in the series and it barely even has the 2 participants actually clashing with their fists.

To top it all off, Shikamaru promises that he will always watch over and protect Asuma’s child. The fact that Shikamaru isn’t a huge personality and amongst a sea of over the top characters, he is a calm and level-headed strategist was what I originally thought was his biggest weakness that turned out to be the best thing about the character.

Man, oh man this character. I don’t think there is any character that is really worthy of being considered the “best boy” in Naruto more than Itachi. This character sends you on one of the most intense roller coasters in shounen. You begin by hating him, then move to wanting to know more about his motivations and the purpose behind his decisions as you uncover more, and eventually you will be crying at the thought of being in his shoes. Itachi is, much like his brother, one of the most tragic characters in the whole series, but he may come out on top.

The Uchiha clan were planning a coup d’etat that would overrun the Hidden Leaf. Itachi despises conflict and war and so he attempted to resolve it before it got out of hand. Originally the plan would involve a form of genjutsu performed by Itachi’s close friend, Shisui, that would convince the Uchiha clan to forget the idea of rebelling. However, this plan was stopped by Danzo and resulted in Shisui’s death. Itachi was met with an incredibly painful decision.

In exchange for his younger brother’s safety, Itachi carried the burden of massacring his entire clan. This was not some test of strength, this was the only way that Itachi could retain peace within the Hidden Leaf. Had the Uchiha revolted, the Hidden Leaf would be weakened and that could have resulted in an even bigger war with other nations. Itachi did what he did to save his brother and keep the peace of the village.

Even during the final moments in his battle with Sasuke, he removes the curse mark and the hold that Orochimaru has on his brother. The entire time, Itachi was always looking for a way to make things better. Even if it meant that the entire world called him an enemy, he would be at peace knowing the Village is safe and his beloved younger brother is alive. Itachi is considered by many to be the best character in Naruto, and it’s for a damn good reason.

That wraps it up for this review. Hope everyone enjoyed it despite the lack of anime waifus.

As always, thanks for reading! Stay safe and healthy!