Sakakibara Yui in her music video, Nyanderful. Note the cat guardian statue from Nyan Koi on the table.

It is time to put on those cosplay cat ears and start practicing your meows! With a swarm of talking felines, a vengeful cat god and a tortured hero who faces the possibility of spending the rest of his life as a cat, Nyan Koi is the purrfect anime for kitty fans! Crack open the catnip and get ready for a very surreal anime.

Created by Sato Fujiwara in 2007, Nyan Koi was originally a manga series published in a free web comic called FlexComix Blood. The anime first aired in Japan in 2009, with a North American license following in 2010. Nyan Koi has now finally reached the UK, with MVM Entertainment setting the release date for February, 2016!

Everyone in the Kousaka family loves cats! Well, everyone except Jyunpei Kousaka, that is. Poor Jyunpei is extremely allergic. One day while passing a local shine, Jyunpei attempts to throw an empty tin can into a bin. The shot misses, and instead the can ends up hitting a statue. This is no ordinary statue, however! Turns out this figure is the guardian deity of cats! The can knocks the deity’s head off and it becomes very angry at the unlucky Jyunpei. The guardian puts a curse on the young Kousaka. If he does not grant a hundred wishes to cats, he will turn into a cat himself and die from his own allergy! At first glance this anime seems to be cat-obsessed, and although this is true, it is also worth mentioning that Nyan Koi is a harem anime. While you are expected to see multiple cats in a single episode, you are equally expected to see multiple young women fighting for Jyunpei’s attention. I must admit my feelings towards harem anime are rather negative, mostly because the protagonist is usually seen leading women on and shamefully betraying their feelings. In this case, Nyan Koi has managed to soften the blow of this genre by having a hero that is somewhat honest and straightforward. He repeatedly tells the women he is not interested in to ‘go away’, he reinforces the word ‘no’, and even straight-out tells them that the only girl he is interested in is Kaede Mizuno. The other women accept this, but as Jyunpei is too nervous to ask Kaede out, they, for whatever reason, make it their mission to change his mind. Fair enough, Jyunpei is a bit of a coward and a tad self-absorbed, but he is not a bad person. At times, you even feel sorry for him.

Comedy is another big genre that Nyan Koi makes use of. The comedy is a mixture of slapstick, cheese, sexual innuendos and drama. Indeed you will often see Jyunpei spitting out his drink after hearing something unexpected, or see him dramatically collapse to the floor after an awkward misunderstanding. One memorable example comes from a scene where Jyunpei unknowingly pulls out Kaede’s bra from his bag due to a vengeful cat pulling a prank on him. Kaede is stunned with embarrassment, and, as the scene takes place on a busy high-street, numerous eyes are focused on Jyunpei in both shock and disgust. Everything slows down for dramatic effect, and both cringe-worthy and amusing comments echo all around the couple. It is not the classist of humour, and such scenes are rather predictable in harem anime, but such scenes can be entertaining nonetheless. Jyunpei Kousaka is Nyan Koi’s protagonist. He is a high school student who lives with his mother and little sister. His father is away on business, and you will often see Jyunpei procrastinating over his misfortune in the form of an inner monologue, one that is always addressed to his father. He is very allergic to cats, a condition he struggles with daily due to the pet cat, Nyamsus, roaming around his house. After being cursed by a cat deity, Jyunpei is plagued by constant requests from local felines. If he fails to fulfil these requests, he faces the very real possibility of turning into a cat and dying from his own allergies! Curiously, this turn of events also brings a string of complications when it comes to women. Kaede Mizuno is a big cat lover, but tends to get too excited when she sees them. The local cats thus stay out of her way, terrified that they will be roughly petted and hugged to death. She is Jyunpei’s classmate, and is initially oblivious of his feelings for her. She is very athletic and is a fulltime member of the track team. She also substitutes for a number of other sport clubs. Kaede is a cute, naïve character who tries to be helpful to the people around her. Kanako Sumiyoshi is Jyunpei’s childhood friend. Although the two were close before their teens, once entering high school, things suddenly turned sour over a misunderstanding. She likes to wear heavy manba makeup as it makes her feel stronger and more confident. She has had a crush on Jyunpei since they were children, a time when she was often mistaken for a boy due to her short hair and tomboyish personality. She struggles with the moral dilemma of fighting for Jyunpei’s affection or allowing her friend, Kaede, to date Jyunpei. Nagi Ichinose is an upperclassmen and Kaede’s senior on the track team. Although her athletic physic and Casanova nature often gets her mistaken for a boy, she is undoubtedly female. She has a soft spot for Kaede, and initially sees Jyunpei as the enemy for troubling her teammate. She soon falls for Jyunpei’s accidental charms however, although her wooing only begins after she tries to get Kaede and Jyunpei to confess their feelings for one another. Kaede is the heir of a powerful yakuza family from Kyoto, and her underlings often dote on her. Kotone and Kirishima are twin sisters. Kotone is the eldest with some very adult hobbies, mainly voodoo, sadism and stalking! She is obsessed with Jyunpei, and loves to see him suffering from misfortune. Kirishima, on the other hand, finds Jyunpei annoying, although she is still prone to blushing whenever he appears! Their father is a Buddhist monk who runs the temple the cat deity stands in front of. The sisters try and help Jyunpei with his curse in surprising, supernatural ways! Chizuru Mochizuki is the local postwoman and a third-year college student. She often gets lost, miraculously bumping into Jyunpei when she is in most need of direction. She is very outgoing and enjoys teasing Jyunpei. She eventually becomes Jyunpei’s boss when he starts working part-time at the post office. She also has feelings for Jyunpei but is content to watch him and his womanising escapades. Nyamsus and Tama are two of the many felines you will find in Nyan Koi. Nyamsus is a large, tubby cat owned by Jyunpei and his family. She is famous among the neighbourhood cats, and is the first cat to make Jyunpei aware of his curse. She brings all the cats with requests directly to Jyunpie. Tama is owned by the Buddhist monk. He idolises Nyamsus and is an extremely rare male calico cat. He also brings requests to Jyunpei.

Sato Fujiwara has a well-developed art style that incorporates a mixture of glossy eyes, understated hairstyles, cutesy cats and seinen body shapes. The anime is easy on the eyes, although there is nothing particularly unique about it. As you may expect from a harem anime, fan service plays a recurring role. Panty shots are to be expected, as are close-ups of the female chest area.

At the end of each episode there is a segment hosted by Nyamsus and Tama. All of the Nyan Koi characters are drawn as chibis and are animated in a way that resembles a moving storyboard. It is a very charming art style that focuses on character interactions and overall silliness. The contents may go over what happened in the episode that just finished, or it may hint at the plot for the next episode.

The opening song, with all its kitty goodness, is called Nyanderful. This highly cheerful tune is sung by Sakakibara Yui, and features light piano playing, guitars, fast drumming and pretty sound effects. The closing song, Strawberry ~Amaku Setsunai Namida~, is slightly more subdued and is sung by Imai Asami. The anime also includes English voice acting for those fans who prefer not to read subtitles.

Nyan Koi is pretty much what it says on the tin. If you like cats and harem anime, then you are sure to enjoy Nyan Koi. The plot lacks a huge amount of depth, but if you want something light and comical, then this anime will not disappoint. Most of the characters have strong personalities, but as you can probably appreciate with seven main characters and only twelve episodes, not all of them are given equal amounts of airtime. Kotone and Kirishima, for example, make their first appearance halfway into the series, and Chizuru’s scenes mostly consist of looking for addresses and then disappearing again. There is definitely some favouritism when it comes to which characters receive development and which characters do not. More episodes may indeed follow though, as the anime ends with a hopeful message of one day seeing a second series! 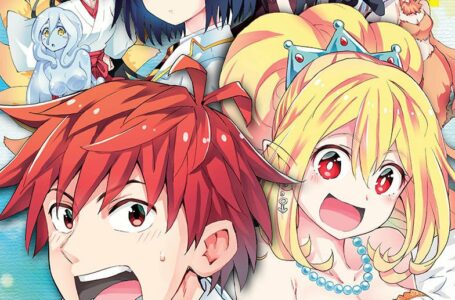 Love Rush Cancelled After 14 Chapters, One...