So I thought I’d take a look at Nyu Media’s most imminent release this morning , a cracking arena battler called Croixleur – another of the rising tide of doujin games that boast some really nice production values and really solid gameplay. There’s currently a demo on the official website and it’s this that I’ve been putting some serious time into recently.

Croixleur centers around an event called ‘The Adjuvant Trial’. This is a tournament, or trial of sorts, where two competing factions battle for the right to hold a position of power in the realm of Ilance. Winning the trial will secure military and political power and the right to protect the Queen of the realm – and so it goes that two childhood friends must do battle.

‘There can be only one!’ as Connor McacLeon says in Highlander – although expect significantly less gore from Croixleur…

Anyway – so begins a very smart – hyper-colourful arena battler. The core gamplay is relatively simple. You have an arena floor – monsters to defeat, and in order to gain access to the next stage you simply have to clear the place out. Successive floors bring with them tougher monster and more of them – and before you know it, things ramp up to get seriously hectic.

This is hack and slash territory then – if you think of Devil May Cry series’ Bloody Palace mode then you’re half way there. To help you in your quest you can select from a healthy weapon selection which give access to different special attacks, and fallen monsters also drop coins which can also be exchanged for more offensive options.

The combat system is quite interesting in that, along with standard chain attacks you have a dash, a jump (of course!) and special attacks that can be cancelled into more devastating combos. There’s also a system where special attacks can be used to knock enemies into other enemies in order to damage them at range – cancelling these into each other drains MP so can’t be spammed relentlessly, and so strategic defensive play (dodging and knocking enemies away) mix up nicely for an added dimension and depth to the combat.

The free trial only lets you play Score Attack – three minute bursts of play that will let you get a feel for what’s coming in the full version – and is well worth checking out. The further two modes are the Story (the main meat and bones of the game) and ‘Endless’ – a survival mode where, I’ve no doubt, I’ll be spending more of my time for the inevitable chaos!

Lastly, before you try out the demo – I’d like to urge you all to take some time out to vote for Croixleur on Steam Greenlight here – the place could certainly do with a little more choice in terms of doujin games, and I’m sure Nyu Media will be very appreciative of your support!

You can find Croixleur’s homepage, as well as the free trial here. 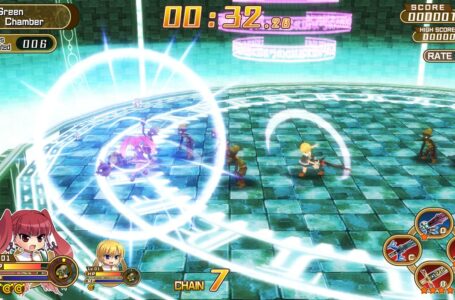