From the moment I first saw Rabi-Ribi I was excited, but I wasn’t aware how great the game actually was until I actually sat down and started playing it. It took a lot of willpower to put the game down so I could get on with writing this review.

So what exactly is Rabi-Ribi? It is a Metroidvania, bullet hell, action platformer where you play as a cute bunny girl accompanied by her adorable fairy friend.

At times the design feels almost nostalgic. It takes inspiration from the great classics such as the original Mega Man games, Super Mario World, as well as the Castlevania series. Rabi-Ribi has a gamy feeling. You will enjoy a stroll through green forests, hop on a sunny beach, enter a popular tourist pyramid, swim through icy waters, battle against maid robots in a laboratory, explore various caverns, climb up to a floating island town which is controlled by a succubus, duel against perverted otakus in the middle of a busy highway – if you thought of it this game has it.

Rabi-Ribi is open-ended even for a Metroidvania game. After the first two chapters you can literally go anywhere you want and tackle bosses in whatever order you want. And there is a lot to see and do in the world. Exploration is a huge element of this game. You will find secrets whenever you start searching a bit more diligently. Each and every boss in the game is memorable and each encounter is a challenge. Losing never feels frustrating, since a save point is always just a few steps earlier.

Bosses feel like a mix between a fighting game and a bullet hell shmup. You will be hopping around dodging incoming fire all while dishing out as much damage as possible. Bosses have a huge number of bullet patterns. It takes 3-4 tries just to see all possible combinations of attacks that one boss has. Unlike in typical shmups, bosses feel more natural. The boss at the Icy Summit will throw beautifully snowflake patterns that slow you down while dueling out against robots will have you dodging incoming rockets. Once you finally take down a boss she will go to Rabi Rabi town giving you the ability to make use of special stat boosts.

This is a pretty hefty adventure, taking well over 15 hours to complete, and after that, there is a lot of post-game content. Many locations are locked out until you get a specific skill. Some ledges will be too high while others are too small for you to pass through, meaning you will have to make your way back later. Thankfully the game is rather generous with its warp points meaning you will never be more than 2 minutes from your desired destination. Considering this is a doujin title it’s surprising it has quite a story to boot. Don’t expect a deep and emotional plot, but what is here is more than enough to keep you motivated and entertained throughout the whole game. You follow Erina a rabbit who has turned into a human and Ribbon her sidekick fairy. All the characters that you meet end up being bosses and each of them has a unique character, meaning you are bound to grow to love a handful of them.

You arsenal starts out small, with just a piko hammer and your fairy which fires magic projectiles. But it will quickly grow larger with carrot bombs, slides, jumping attack and super attacks. Despite some slight RPG mechanics, your skill is ultimately the only thing separating you from victory and the game over screen. Every attack is dodgeable. You are given just enough leeway to make a few mistakes during boss battles. During your journey, you will acquire the Bunny Amulet. This will give you just a single moment of invulnerability, enough to survive those impossible barrages. You can also use your homing magic to heal you just enough to take that fatal blow and survive. If that is not enough, you can purchase and use consumable items that replenish a portion of your HP gauge but beware since you are left wide open while eating them.

The controls are precise and every time you get the game over screen only your skills are to blame. With that said, playing with a controller is a must and even then you will be gripping your whole controller in order to play as efficiently as possible. Amazing production values for a doujin title. Absolutely every aspect of the game is polished beyond belief. From the detailed sugar filled with cuteness pixel art graphics, with artworks that sometimes dips into fanservice, to beautifully animated stylish menus, to the massive soundtrack that has a catchy tune for every occasion, there is so much that Rabi-Ribi does right. Even the minute details make this game stand out, one example is the music which slows down when in you are underwater or slowed down.

The entire game is littered with references to other media. In the menu your characters will be shrink wrapped like they are in boxes from Good Smile Company’s Nendoroids, there are characters are inspired by the anime Is the Order a Rabbit, you will meet and battle against Chocola and Vanilla from Nekopara, and even enter the world of the Plurk blogging service, taking on their somewhat creepy mascots. A lot of love went into Rabi-Ribi and it’s visible in every aspect of the game. With the excellent gameplay, extremely cute visuals, beautiful artwork, an amazing soundtrack, enjoyable characters, and humorous story and references, Rabi-Ribi may very well be ranked among the best games of the year. 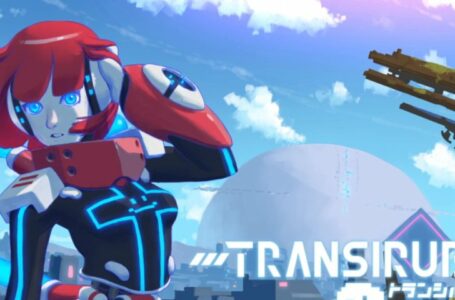 Transiruby is a slick new platformer from...