Doujin games rarely become popular and even when they do it’s usually a title from an already established company. Higurashi managed to defy all odds selling over 500,000 copies, this is something not seen since Type-Moon’s Tsukihime. Higurashi is a tale of friendship but also a tale of betrayal. It’s both a sad and happy story at the same time, frequently playing with the emotions of the reader.

In Higurashi you play as Maebara Keiichi a guy in his teens who has recently moved to the town of Hinamizawa with his family. Hinamizawa is a remote town surrounded by woods. Keiichi quickly makes friends with the local kids whose ages range from 10 to 17. From then on things seem like a standard everyday happy slice of life. But after some time Keiichi stumbles upon an old newspaper which talks about a local murder case. Keiichi’s peaceful life soon comes to a screeching halt and you soon realize that not everything is as it initially seemed, with the once peaceful town becoming a place of horrors. The thing that makes Higurashi so unique is the fact that the game slowly lulls you back into the life of a carefree high schooler and then it crushes this illusion with a nightmarish twist. This kind of contrast is what makes the game terrifying. Things slowly become more and more disturbing and confusing as if everything you have seen before was just a farce. A kind girl that was your friend may start to act strangely, while locals seem to be hiding the secrets about the history of this town. Hinamizawa is located far from any neighboring town making escape a difficult option. Add the fact that the town has an eerie history of missing people, the so called spiriting away by demons, you get a perfect set up for nightmares for weeks to come. You are never really know who your friend is and who your enemy is, bringing a sense of paranoia I have never before seen in a game.

I was the most unfortunate.
I knew that there was no exit out of this maze.

Then, he was the next unfortunate.
He did not know that there was no exit out of this maze.

But all the rest weren’t so unfortunate.
They didn’t know that they were in the maze in the first place.

Higurashi is filled with genuinely creepy moments. From gruesome murders to sickeningly depicted torture scenes. Keiichi is both forced to save his head and figure out what exactly is happening. The first chapter immediately shows you what to expect at its end, but you will still be shocked by the twists and turns that brought you there. Things seen in this game will haunt you for weeks to come and will probably make you paranoid imagining someone is standing behind you. During his first month in Hinamizawa Keiichi already made a bunch of friends. His group of friends consists of only girls: Furude Rika, the shrine maiden in Hinamizawa, Hojo Satoko, Rika’s closest friend and who loves to play pranks on other people, Ryugu Rena a happy and innocent girl, and Sonozaki Mion a rich girl who loves to play board games. Each of their relationships is well thought out and you really see them as a happy group always messing around. More often than not you will see their daily activities which consist of playing board games after school with the loser getting punishment. Even when they go to a local festival they compete with just about everything. While some of the characters may be a bit “too old” to play tag, you still can’t but start to feel nostalgic about your summer days as a child.

While you are surrounded only by girls don’t think one second that this game will be a romantic harem novel. There is very little romance to speak of and the main character is more focused on saving his head than wooing chicks.

The game is divided into 8 chapters all released over the span of 4 years. Each of these chapters takes more or less around 10 hours to complete. The first 4 chapters serve as an introduction to the group of friends and town of Hinamizawa, as well as the set up for the mystery which you are tasked to solve. While the latter 4 chapters serve as a solution to the mystery, each focusing on answering the questions placed in one of the first 4 chapters. Chapters are set out as distinct episodes, each encapsulating one part of the story. All the chapters begin in at a similar time but play out totally different, making you question if there really is some butterfly effect at work here. Each of these individual chapters serve to fleshout the backstory of a specific character, keeping the game from ever becoming stale. Not everything is black and white no matter how it may at first seem and by the end you will end up feeling sorry for many of the characters regardless of the evil they have done. The game is rooted in deep philosophy, especially in the latter chapters, constantly posing questions about everything in reality. It wouldn’t be weird for you to see the world in a different light by the end of everything.

Don’t search anything about Higurashi online, absolutely every detail about a character can be potentially story breaking. The anime, while not bad, doesn’t hold a candle to the visual novel. The anime is like a horror movie, while the game is like living through the horror yourself.

Higurashi was released, besides on Windows, on both the PlayStation 2 and Nintendo DS. Additionally the game recently became available on both Android and iOS. But only the PC version has an English translation.

Since Higurashi was made by only two people it isn’t without its flaws. The visuals are horrendous, ZUN levels bad. Backgrounds are just photographs with lazy filters added. Characters look like disfigured mutants. You will get use to the visuals after some time, but it can be a rough start. The game is void of all choices, meaning it’s a linear game from start to finish. Still, I’m willing to overlook this since I never felt like the main character did something I wouldn’t, also the game explains its lack of choices in a latter chapter. Another issue is the that each of the 8 chapters begin in a similar manner which do make the game feel a bit repetitive, but fortunately they are varied enough to remain enjoyable throughout the whole game. From the audio side, the game lacks voices but the music is quite good, it does what it’s supposed to, making certain that you are either terrified or depressed. While it has its flaws Higurashi When They Cry is still the best visual novel I have ever played. The characters are believable and stick with you even after the game. The plot is a great with twists and turns you would have no way of ever predicting. The setting is extremely creepy and most of all the mystery is superb. Everything fits perfectly at the end, giving you that AHA moment when you finally figured out what truly happened. While it may not have any sexual scenes, the gory elements are still not for the faint of heart. Don’t miss out on this game. It’s available on the Manga Gamer site as has currently been greenlit on steam.

The entire first chapter of Higurashi is available for free on Manga Gamer. 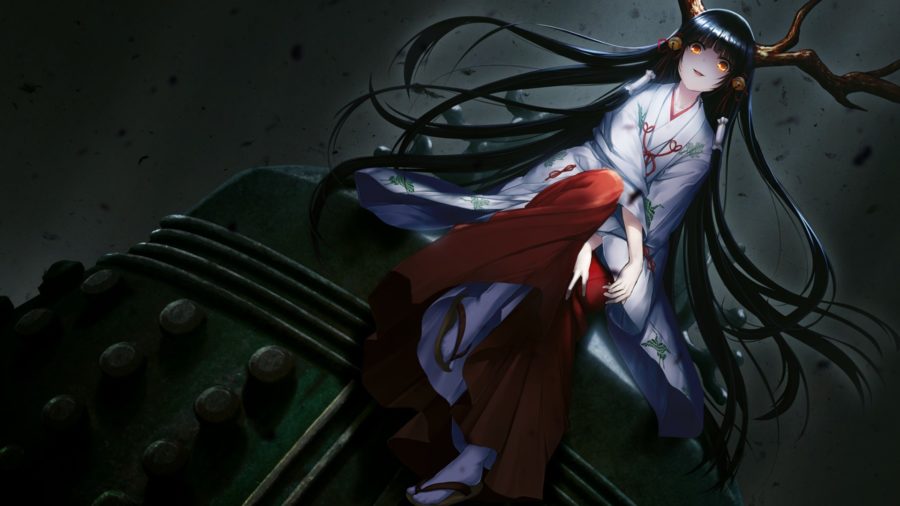