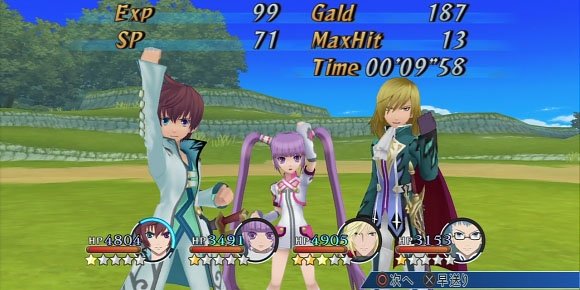 I’ve always felt that the Tales series is overlooked by many JRPG fans, with many of them turning to more mainstream series’ such as Final Fantasy. However, those that take the time to try out Tales of Graces F will find a game that is full of interesting characters and fantastic gameplay.

Tales of Graces F story begins with Asbel Lhant, a young boy who manages to get himself into trouble surprisingly easily. He, along with his brother Hubert, are at nearby meadow where they find an amnesiac girl – who they later name Sophie. This meeting marks the turning point in the young boys’ lives.

While the childhood arc of the game helps to set up the story for Graces F, it isn’t until the time skip where the game truly opens up and the story starts to pick up speed. Those that are impatient may have trouble making it through the beginning of the game, but without this part the story wouldn’t have the same impact it does. Knowing what happened during their childhood makes each character have far more depth than they would otherwise.

The story stays strong long after the opening chapter, with new characters joining the group and more challenges that they have to face. While the whole “group of teenagers save the world” story has been done many times before, the way it is handled here really makes it stand out. The inclusion of an extra chapter that takes place after the main story, unavailable in the original Japanese Wii version, also helps to flesh out the characters further.

While Graces F’s story is impressive, the game’s battle system is even more so. The Tales series is known for its unique real time battle systems and Graces F’s is the most accessible yet. MP is replaced with Chain Capacity, which is consumed when using attacks during battle. CC is easily refilled and allows players to be far more aggressive than they usually would since they don’t have to conserve it.

Battles play out more like a fighting game than a regular JRPG, with different moves comboing into others and certain strings of attacks allowing for massive damage. Finding out which attacks work best for each situation ensures that battle system stays fresh even at the end of the games 50+ storyline.

While each character has their own personal traits in the game’s story, they also have unique fighting styles. Their fighting styles make each character fun to use and mastering all of them will take some time. Asbel for example likes to get up close to enemies with physical attacks, while his brother switches between long and short range attacks. Each character also unlocks a special boost mode called Accel mode late in the game, which adds further possibilities during combat.

Character progression is another area in which Graces F changes things from the norm. While levels and experience are still present, more focus is places on a feature called ‘Titles’. Each character has many titles they can collect, which are acquired for doing things like defeating a certain amount of enemies. These titles will grant certain bonuses while equipped and are strengthened separately from each characters’ level. As they get stronger you gain permanent bonuses and attacks, which stay even after you change titles. This encourages you to go through as many titles as you can and allows for greater customisation.

While Graces F’s story and gameplay are top notch, there are some areas where the is some room for improvement. The game’s soundtrack, an area which is usually a strong point of the Tales series, is somewhat lacking. While there are no tracks that are particularly bad, there’s not much to set them apart from each other. Graces F isn’t much of a looker either. Being a port of a Wii game means that many character models and areas in the game look somewhat jagged thanks to the lower polygonal count. That being said, it’s not too rough and some parts of the game look amazing. Just don’t expect something at the level of games like Lost Odyssey or Eternal Sonata.

Neither of these points detract from the game too much, but it best to know about them before diving into a game as long as this one.
Tales of Graces F is an amazing experience, with a combination of brilliant battles and engaging story keeping you entertained long after the main story has finished. This is also the perfect entry point for those that are new to the series, especially since it’s a lot less rare than some of the earlier Tales games (I’m looking at you Symphonia). Tales of Xillia, the next main title in the Tales series, will be released later this year, so I recommend that you start playing this fantastic game now before its arrival.