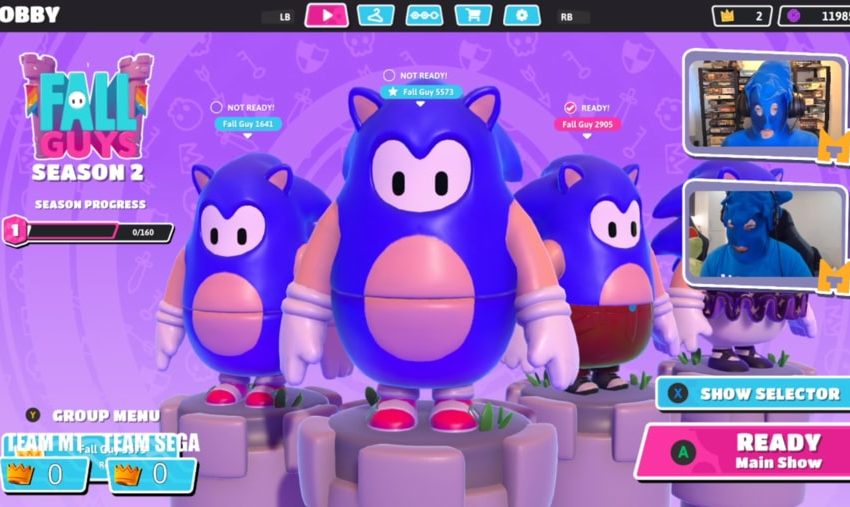 You can now dress up as Sonic in Fall Guys

The Sonic the Hedgehog Fall Guys skin that was recently leaked by data miners is officially coming out tomorrow, Mediatonic has revealed. In an announcement livestream yesterday, the devs turned up wearing the most horrifying skin-tight Sonic costumes imaginable. Fortunately, the in-game version they were there to show off is far cuter. The skin doesn’t […]Read More

Sonic the Hedgehog Movie Delayed To 2020

I might have personally not minded it, but a lot of people took great issue with the recent trailer, and so I’m not really too surprised to hear that there will be a Sonic the Hedgehog Movie delay, according to Paramount Pictures.   In a tweet, director Jeff Fowler has said that the already much […]Read More

The Sonic Movie Trailer Is Out … And It’s A

We’ve been laughing and cringing along with the rest of the world as more and more information has come out about Sonic The Hedgehog (2019); firstly with that poster, then with the full reveal of the design of the Blue Blur. Now, Paramount have revealed the first official Sonic Movie trailer, and it’s … erm […]Read More

Sonic Movie Sonic Design Leaks and Sure is Something

There’s been a slow trickle of information regarding the Sonic movie announced late last year, and now the film’s design for Sonic seems to have been leaked! It’s…a thing. You’ll have to see for yourself. Thanks to ResetEra for the info.     Are you ready?   Ta-da! While I’m certain it could be worse, […]Read More

I have a great love for Sonic as a character and a universe. The games might not always be the best, in fact some of them are god-awful, but sometimes the Blue Blur has his name placed on a genuine gem of a game. This year we’ve already had the incredible update to Sonic Mania, […]Read More

Sega has announced that developer Sumo Digital, the team behind the fantastic cart racer Sonic & All-Stars Racing Transformed, are returning to create Team Sonic Racing. This time it’s 15 Sonic characters joining the race rather than characters from throughout Sega’s history.     The game is set to release later this Winter and you […]Read More

Sega has announced that Sonic Mania will be dashing back to PS4, Xbox One and PC later this Summer with Sonic Mania Plus. Sega has heard fan’s pleas for a physical version of the game and now they’re delivering on that plus new characters, an art book and more.   You can get a look […]Read More

Sonic Forces Launch Trailer Sets You Up for the Game’s

Sega has released the Sonic Forces launch trailer ahead of its release tomorrow, highlighting a bunch of things such as Sonic, hedgehogs, the story, gameplay and character customisation. I need to see that Persona 5 phantom thief DLC outfit in action!     You can check out the launch trailer below, or you can wait […]Read More

So, The Hollywood Reporter has revealed that Sonic movie idea that’s been floating around for a while is still going ahead! Only now it’s being developed by Paramount Pictures, who recently picked up the rights from Sony Pictures. The project will mix CG animation and live action. I can’t even imagine how that will work […]Read More