PQube have released descriptions of the main party members in Tears of Avia, along with what you can expect of them!

Tears of Avia is due out later this summer on Steam and Xbox One, and we’re starting to see more information about the game and its characters. With this in mind, PQube have released descriptions of each of the main characters:

Kai possesses a strong heart and an iron resolve when it comes to his convictions. As a young boy growing up in the great city of Tirig, he always admired the revered knights of Tirig, warriors clad not just in armor but also in honor. As he grew and trained, he found himself disappointed with the lazy guards that surrounded him and continues to dream of the day when he could prove himself among the greatest knights.

Reina’s grounded approach to the world serves her well as an adaptable Ranger. She spends most of her days hunting the wilds of Estera and living off the land, only rarely making her way to civilization to bolster her supplies… or for the odd card game. But as calculating as she is, all risks measured and weighed, she always comes out ahead, whether it’s trapping game or bluffing villagers.

As a self-assured master of magic, Iris is the quintessential Mage, brimming with a confidence only matched by her ego. After her days spent under the tutelage of a master, she now roams across the continent searching for ancient tomes or trinkets in long forgotten places. Anything that will make the impatient mage stronger. Though her goals would probably be easier if she didn’t have the slightest streak of pyromania…

Raul’s days were spent carrying goods for people more wealthy than he, but his nights were filled with tavern brawls, several pints of ale, and if he was lucky, a woman. All the things a man needed to put a smile on his face and a pulse in his heart. Still, every morning there was a feeling in his chest that ached for something more. Ached for a destiny that brought purpose to the strength behind his fists.

Selfless and caring, Momoko’s only true wish is to be useful as a Priestess of Liathi. Growing up in an orphanage in the Nemeton Forest, the priestesses there taught her about the light of Liathi and how her presence warmed all of Estera. A wide-eyed young Momoko fell into the teachings, learning everything she could from the women who raised her. Once she’d learned the sum of their knowledge, she left the orphanage seeking to learn more and spread Liathi’s light to all corners of the world.

Hopefully we’ll continue to learn more about the different aspects of this one as we get closer to release, but I can quite comfortably tell you I’m a Reina stan already. I have a thing for women with bows. 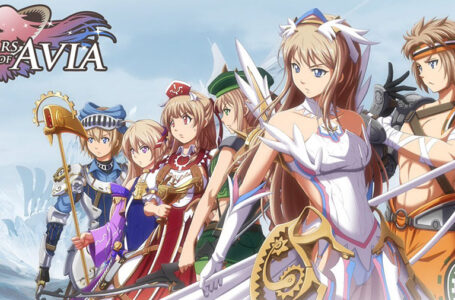