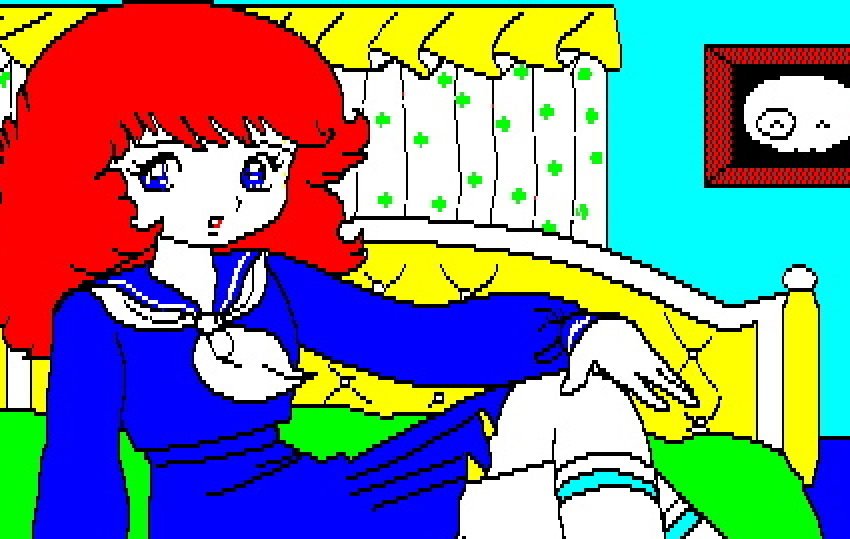 It’s surprisingly tough to pin down the exact origins of lewd games, since a lot of things from the early days of computing went unrecorded — and, as you can probably imagine, lewd games have not necessarily been a priority for gaming historians!

That all changes right now, though! Over the course of this ongoing feature, we’re going to look back through the history of lewd games and pick out some choice titles that helped us get to the place we are today. We won’t necessarily go in strict chronological order in the long term, but for today, we will be taking a look at a couple of the earliest lewd games in recorded history.

First up, a bit of context and history. Yakyūken (野球拳), which literally means “baseball fist”, is a Japanese game that originated in the mid to late 20th century. The term itself has a rather peculiar origin — supposedly in 1924, the manager of the Ehime baseball team improvised a cheerleading dance to boost the morale of his team, who had been humiliated in a match, and this dance became an iconic part of the team’s identity.

Some thirty years later, a number of popular singers from various Japanese record labels each adapted the dance and the accompanying lyrics into singles collectively known as Yakyūken. With the dance becoming known nationwide, it started to be used to accompany the city of Matsuyama’s annual August banquet. And some time around 1970, it managed to transform itself into a parlour game — part of the broader range of “sansukumi-ken” games, of which janken (brought to the West as rock-paper-scissors) is probably the most well-known variant.

Honke or “orthodox” yakyūken as a sansukumi-ken game usually involves three players participating. The host calls out “play ball!” as in a baseball game, and the contestants dance to traditional music played on the shamisen and taiko as the host chants “runner ni nattara essassa”, or “hope the batter gets to run”. At some point during the process, the audience calls “Out! Safe! Yoyonoyoi!”, at which point the three contestants first show a fist, and then “jankenpon” to choose a rock, paper or scissors gesture. Losers depart and are replaced by newcomers; ties are broken with a second round of janken.

Where does the lewd come in? Well, in 1969 Nippon TV showed a skit (seen above) as part of a popular variety show, in which female guests were invited to play the sansukumi-ken game described above on stage, with the losers undressing and auctioning off their clothes to the studio audience, with the money going to charity. This proved so successful that it became its own show, known as Yakyūken due to host Kinichi Hagimoto’s love of baseball. And consequently the game of yakyūken became inextricably associated with stripping games — in 2005, Hagimoto visited Matsuyama and apologised for his unintentional distortion of what had become one of the region’s defining cultural traditions.

It didn’t stop there, though. Yakyūken became popular in Japanese adult videos, and from there it became part of video gaming, with the first adaptation being for the Sharp MZ-80K and MZ-700 home computers in 1981. Simply titled Yakyūken, this lewd game by Hudson Soft pits you against a 19-year old woman named Megumi, who supposedly comes from Hokkaido –and who has a distinctly angular appearance due to being primarily formed of ASCII characters rather than pixel art.

The game was written in BASIC and was published as both a retail version called “HuPack #2” and as a type-in listing as part of a book called the MZ-700 Joyful Pack — yes, in that latter case, you were given the program listing and had to type it in to the computer yourself! The things people would do to enjoy their lewds in a pre-Internet age.

The game is extremely simple and requires you to do nothing more than press 1, 2 or 3 on the keyboard to choose your gesture after the call of “Out! Safe! Yoyoyonoi!” — success causes Megumi to lose an item of clothing.

Towards the end of 1982, eroge developer PSK decided to run with the concept, and put out a game called Lolita (Yakyūken) for the NEC PC-88 and Fujitsu FM-7 home computers. The concept behind this is pretty much exactly the same as Hudson’s Yakyūken — after the call of “Out! Safe! Yoyoyonoi!” (represented in katakana rather than partially in English text this time around) you simply press 1, 2 or 3 on the keyboard to choose your gesture.

Win, and your young-looking opponent strips off an item of clothing — removed gradually through a delightful example of loading from a floppy disk being used as a deliberate tease. Lose, meanwhile, and you wave farewell to one of the six items of clothing listed in the corner of the screen — beginning with your uwagi (outerwear) and, of course, concluding with your pantsu.

Ultimately, of course, you always lose; even if you successfully find your way past your opponent’s stubborn massive ’80s pantsu — being computer-controlled, she’s a lot harder to outwit or psych out than a real-life opponent! — you end up being taken away by the police. Thou shalt not lewd the lolis, even back in 1983.

Lolita (Yakyūken) is noteworthy for being the earliest recorded eroge listed in the extensive visual novel database at VNDB.org. While not itself a visual novel, it was followed up by two further Lolita games from PSK that featured slightly stronger narrative content — the second, known simply as Lolita 2, was a text adventure in which you played a pervert following young girls around after school, while the third, Final Lolita, had more RPG-esque mechanics… and was weirdly violent. Perhaps the creator had some unresolved issues, and that was a good way to express them.

It’s always good to know your roots, though — and while Lolita 2 and Final Lolita are rather tricky to enjoy if you can’t read Japanese (to say nothing of the morality of their respective content), Lolita (Yakyūken) is a fun way to while away a few minutes if you have access to a means of playing it.