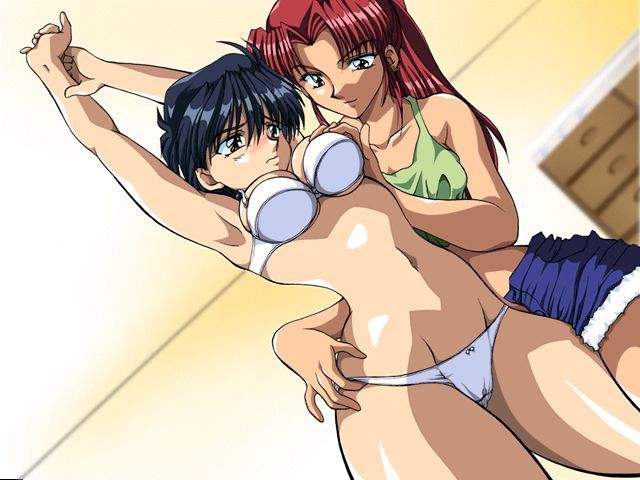 The concept is sound: what would you do if you woke up one morning and found out that your body had completely changed its physical sex? That’s the situation that X-Change’s protagonist Takayu Aihara finds himself in after spilling mysterious chemicals on himself while cleaning up the school science lab.

There’s the potential for some interesting things to explore here, particularly with the increased visibility that trans people have today — though at this point it’s worth bearing in mind that X-Change first came out in Japan in 1997. As such some of its attitudes can be looked on as a little less than progressive, though “gender-bending” comedies were by no means uncommon at the time.

The widely beloved Ranma 1/2, for example, ran for 38 manga volumes between 1987 and 1996 and spawned two anime TV series, three movies and a variety of spin-offs. People were open to the idea of a protagonist who switched gender and/or sex for one reason or another, but it wasn’t specifically looked upon as a “trans” thing; it was just a narrative concept and fantasy that was interesting to explore.

And it’s certainly that; regardless of your own gender identity or sexuality — and whether or not you’re on a journey of your own — I suspect many people out there have at least questioned what life might be like as a different sort of person sometimes. Wondering if “the grass is greener” is a fundamental part of human nature, after all, and for many people exploring works of fiction is the safest, most practical means of questioning some things for themselves.

X-Change is a long way from exploring this subject matter in a modern, respectful manner, and it’s most definitely very far from any list of “all-time classics” of the medium. But it does warrant a certain amount of discussion — if only because it’s a reasonably well-known title.

At the outset of the game, our hero Takuya is not a particularly likeable character, and his inadvertent transformation acts as a bit of an awakening for him. Not only does he get first-hand experience of simply what it feels like to be a girl in (late ’90s) Japan, he also obtains a lot of sexual experience through a wide variety of encounters, the majority of which raise some fairly serious questions over the matter of consent.

X-Change is an unabashed nukige in which its fairly flimsy plot primarily acts as a vehicle to get us from one scene of girl-Takuya being violated to the next. There is an overarching story, of course — Takuya quickly decides that being a girl is not as fun as it could have been and is very keen to return to “normal” — but for the most part the overemphasis on sexual content rather works to the detriment of that potentially interesting narrative.

For the most part, girl-Takuya just sort of puts up with the treatment she receives; after a couple of scenes, you’ll doubtless find yourself more rolling your eyes and sighing at her getting unexpectedly railed yet again rather than feeling in any way shocked. This is not an especially comfortable place in which to find oneself — though this does, of course, raise the question as to whether or not you are supposed to feel comfortable watching this. Immoral Study raises the same question in the same way, so this was not an altogether uncommon way of doing things in late ’90s and early ’00s nukige.

X-Change has the potential to make a point about how women are seen by men and how Takuya is getting a first-hand, extreme example of what it’s like to be objectified. But with the perversely gleeful way in which many of the game’s sexual scenes are presented, it’s hard not to say that it kind of missed the opportunity to say something a little bit more profound.

But then X-Change has never claimed to be a work of high art, or something which expects people to think about what it’s showing them. Much like Immoral Study, it’s entirely up-front about what sort of experience it plans to offer the player, and chances are if you boot this one up you already have certain expectations as to what you might be about to see.

The widespread use of sexual violence in Japanese media — particularly that from around the turn of the century — can be at least partly attributed to the country’s rapid societal changes, particularly with regard to how women are treated. Japanese women didn’t get the right to vote until 1946, for example, and it wasn’t until 1986 that an Equal Employment Opportunity law was enacted. To put this in context, women got the right to vote in 1918 in the UK, while today’s equal opportunities laws also have their roots in legislation from that period.

Regrettably, this left some older Japanese men feeling disenfranchised due to a feeling of diminished “authority” — and younger Japanese men just coming into adulthood found themselves unable to enjoy the power that previous generations had seen the questionable benefits of. This is, of course, a good thing on the whole — but one could argue it had an impact on popular media.

Specifically, as we described above with the matter of fantasies, some creators used the fantastic nature of manga, anime and other related media to express things that were no longer “acceptable” in polite society. These creators would often place their female characters in positions of peril and dominance by men — and arguably the most extreme form of male dominance over a woman is sexual violation.

There’s an argument to be made that pushing misogynistic attitudes into popular media isn’t really solving the problem so much as it is moving it somewhere that it has a little less impact — but you can also argue that shifting these attitudes out of reality and into the land of fantasy is ultimately a positive move. It allows those who find it hard to let go of past attitudes to express and explore those feelings — and perhaps learn something along the way — while “real life” can continue in a more positive direction.

Of course, this is all dependent on clear boundaries between fantasy and reality being maintained. But a desire to explore these things doesn’t necessarily indicate actual feelings of misogyny, either; it’s worth acknowledging that there are people (both male and female) out there who do fantasise about rape, sexual violence and other forms of deviancy from the sexual norms of society, and it’s important to have a suitable outlet for those fantasies that doesn’t hurt anyone. Fiction — and particularly interactive fiction — is a prime example of one such outlet.

So did X-Change’s creators have an actual grudge against women — or did they just want to make a gender-swap nukige in which the main character moved from one sexual scene to another with minimal narrative justification?

I suspect the latter. The other female characters in the story are actually treated quite well, with a number of them exerting a considerable amount of power over Takuya in several ways. In some ways, you can even look on the fact that Takuya getting violated when he is still “really” a boy as him getting comeuppance for his past transgressions and mistreatment of the women around him.

If you want to try X-Change for yourself, you can nab it from JAST USA’s digital store.