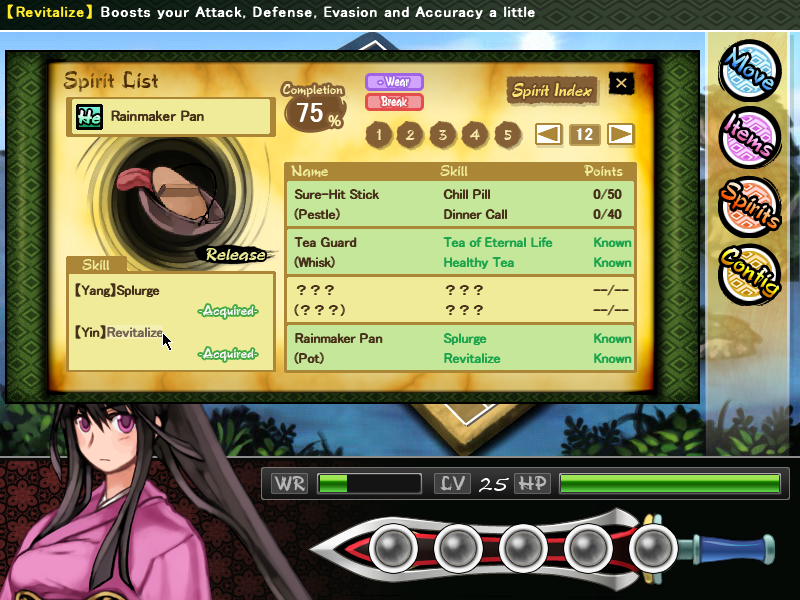 Following on from yesterday’s announcement, the Rice Digital store is now the home of another quirky doujin title. Set in medieval Japan, 99 Spirits is the tale of Hanabusa, a girl who seeks to defeat evil spirits known as ‘Tsukumogami’, while finding out the true potential behind the special sword that is now in her possession.

If you’ve read any of my previous articles, you’ll know that I’m a massive fan of JRPGs, which is why I was excited to find out that we would be bringing one to the Rice Digital store. However, while 99 Spirits can certainly be classified as an RPG, giving it such a label would hide how different it really is.

Hanabusa’s journey during the course of the game takes her through many different locales, with new friends and foes encountered along the way. She is accompanied by a white fox, who also happens to be a servant of the mountain god. The sword she is given by the mountain god was created by her deceased mother, which grants Hanabusa the ability to see the true forms of spirits, which is invaluable them fighting them.

You see, without knowing a spirits identity, they cannot be damaged by any means. This is where 99 Spirits’ main hook comes in. As you attack an unidentified spirit, you will learn parts of their name, as well as actions associated with it. As mentioned before, these spirits are Tsukumogami, meaning they are objects that have come to life. Using the information you gather, you can find out what object they are, which in turn allows you to slay them. While this may take a little getting used to at first, after a few battles you should get the hang of it.

Hanabusa’s sword also has some extra skills, which are represented by gems which are shown at the bottom of the screen at all times. Early on, she ends up damaging most of the gems during a battle with a strong spirit, which seals away most of the sword’s power. As each gem is restored, extra skills can be used when travelling and in battle. The main game changer comes from one gems ability to capture spirits. Combined with other gems, this allows you use their skills in combat, as well as for puzzles outside of battle.

99 Spirits offers up a solid 10-15 hours of RPG goodness, and there are even extra endings to seek out. It also features beautiful artwork and an atmospheric soundtrack, which capture the game’s time period perfectly.  You can grab the regular edition from our store right now!

The Deluxe Edition of 99 Spirits contains the full soundtrack for your listening pleasure, as well as the original Japanese game, so I definitely recommend that you pick it up here.

99 Spirits, along with the rest of the Rice Digital store’s library, can be purchased internationally. Currency is converted automatically at checkout.