Lonely Yuri is a game about the growing relationship between high school girls Fusa and Seri. Developed by doujin group Night-Time Sheep in 2011, Lonely Yuri won DLsite’s First Anniversary Campaign and was translated into English. Although a girls’ love visual novel at heart, the game doesn’t stray from issues such as loneliness and the need for affection.

We start the story in Fusa’s shoes. After being asked to deliver some handouts to Seri, a girl who never attends class, Fusa arrives at Seri’s intimidatingly large house. Once invited into Seri’s empty room, Fusa falls asleep and wakes up hours later to a strange sensation. It turns out that Seri is rather playful and stole a kiss from Fusa while she slept slumped over the table. Fusa responds awkwardly, unsure how to handle the situation, but Seri’s catlike charm convinces her to stay the night. Over the next few days, Fusa keeps returning to Seri’s house and finds that Seri is just as lonely as she is.

While the premise allows for yuri shenanigans, the game keeps a careful balance between playful and serious. It’s obvious from the opening lines that Fusa has problems at home, and as things progress you come to realise just how serious these problems are. Similarly, Seri seems like the kind of girl who might just be too lazy to go to school, but she does have things she worries about and isn’t all that different to Fusa in the end. The end is an almost ideal balance between dealing with their problems seriously and keeping the game’s light-hearted tone.

The game’s presentation is rather simple – a fullscreen textbox over a few sprites, simple backgrounds and event images – but it suits the simplicity of the story quite well. The music aids its calm and comfortable feel. It takes about half an hour to an hour to read through and it’s very easy to settle into the routine Fusa and Seri set up. Those who are interested in a simple girls’ love romance story where the characters have more intimacy than drama will likely enjoy Lonely Yuri.

The translation needs a little editing as awkward sentences and tense changes pop up infrequently. Though once you settle into the particular way it has been translated, it’s easy to ignore these aspects. It’s a fine effort on the translation team’s part and I think the developers can be proud.

The only possible flaw this game could have is that its resolution is too optimistic and childlike. Resolving the years of loneliness in the two girls’ hearts is a big task, but Fusa tries to make things work regardless. To her merit, she is only 14 years old and any solution the two try to figure out would be rather impossible later in life. It’s sweet though. Isn’t that all that matters?

There’s also the mystery of Seri and Fusa’s family background. As she is the focal character of the game, Fusa gets more hints as to why she lives alone but Seri still remains a mystery. If you’re the kind of player who likes to get into backstory details, you should keep in mind that those aspects are left to the side in this game. It’s much more about the characters and emotions.

Lonely Yuri is a short, sweet romance story between two young high school girls. The game’s presentation is simple and so is the story but it’s still an enjoyable read. While the translation has its flaws, it shouldn’t stand in the way of anyone wanting a cute girls’ love story. Details and serious resolutions to long-standing problems are left to the side to allow the story to focus more on the characters and their emotional journey. 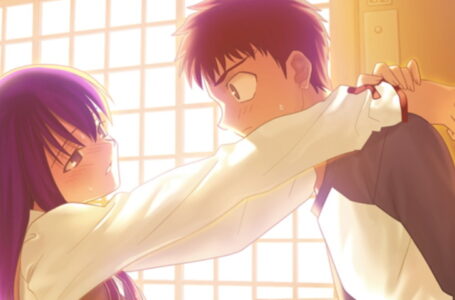