After having so many Musou games under their belt, Koei Tecmo and Omega Forces have finally decided to bring many of their IP together to create the ultimate cross-over game in the genre. The likes of Atelier, Nights of Azure, Dynasty Warriors and Dead or Alive band together to save another world in Warriors All-Stars.

When the magical spring of another world’s kingdom beings to falter due to the loss of its king, three heirs to the throne battle it out to see who’s worthy of being the next successor. In an attempt to better their armies, heroes from various other worlds are summoned and cannot return until a king or queen has been decided, and the spring restored to its former glory. Seeing the various characters banter among themselves and make references to other characters and worlds is great fun, and seeing these familiar faces battle in a fresh way is delightful. There’s plenty of fan-service here, and it makes for a familiar yet new experience. There’s plenty of fan-service here, and it makes for a familiar yet new experience.

All-Stars does what Musou games do best, allowing you to mow down hundreds of enemies in satisfying and exciting large-scale battles. It’s big reward for little effort, but All-Stars meets with the human desire to constantly be achieving at something. Item pick-ups to strength your characters are constantly being left behind by fallen enemies, and there are a bunch of missions allowing you to gain another ally to play as. There’s always something to do and there’s always cool rewards to be found so it’s easy to keep jumping back in, especially with multiple endings and routes to tackle.

The core gameplay is the same in that you have weak and heavy attacks, and special moves which can be performed once you’ve filled the special bar, but there’s a few things here that make the most of having so many different IPs which help to freshen things up a bit. You choose one leader and four characters to accompany you in battle, and they each have different abilities ranging from healing, defence, offence and more that you can utilise, and you can even play as them briefly if you wish in exchange of using their special ability. The various different art styles of each IP blend together naturally.

When you enter the new rush mode, you’re able to slay enemies far quicker than usual and if you perform well, your friends will rally you on and join in for a final, ultimate attack once the timer is up. It helps make the characters feel closer and more like true friends, and adds more excitement to a genre which, surprisingly, hasn’t grown stale. You can increase other’s affections for you by taking them into battle and spending free time with them, such as visiting the hot springs or talking with them at the settlement. Doing this lets you unlock cards you can equip to boost stats and whatnot, so it’s well worth doing. Plus it’s fun!

All-Stars is only releasing on PS4 and PC in the West, and it’s forgoing the Vita version completely. Having played my fair share of Musou games on the wonderful little handheld, I think that this is for the best as they don’t run nearly as well, and their visuals take a heavy hit. On PS4, All-Stars runs smoothly and the various different art styles of each IP blend together naturally, and the new race of cat-people also fit in nicely. I’m pleased with the overall roster and representatives of each given series, along with the game’s unique newcomers, and seeing them in motion is lovely. I’m pleased with the overall roster and representatives of each given series, and seeing each of them in motion is lovely.

A lot of Musou games lack English voice-acting and most of the characters here speak English, but I absolutely adore that Ni-Oh‘s William, who is Irish, stands out as as they’ve kept his English voice. Seeing so many voice-actors and actresses return is a pleasure, and they make the character’s interactions a real joy to experience. Remixes of familiar tunes are joined by a slew of new ones, giving it a tinge of nostalgia despite many of these IPs and installments aren’t all that old. Fans won’t want to miss it.

Warriors All-Stars is a delight to play and with each route only being a few hours, given that you don’t grind or do too much side-content, it’s easy to return and want to play through each route and achieve the true ending. Familiarity is a big thing here with so many faces, worlds and songs providing plenty of fan-service for fans, but it’s easy to jump in without any prior knowledge of each series — it certainly helps, but you’d only be lost on the finer points of some characters if you decided to jump in here. You get more out of it if you’re already a fan though, and fans won’t want to miss it. 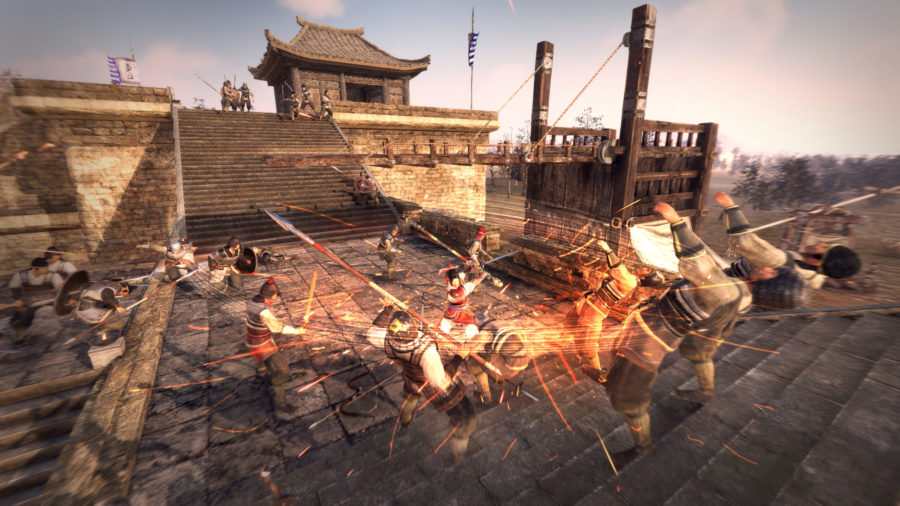