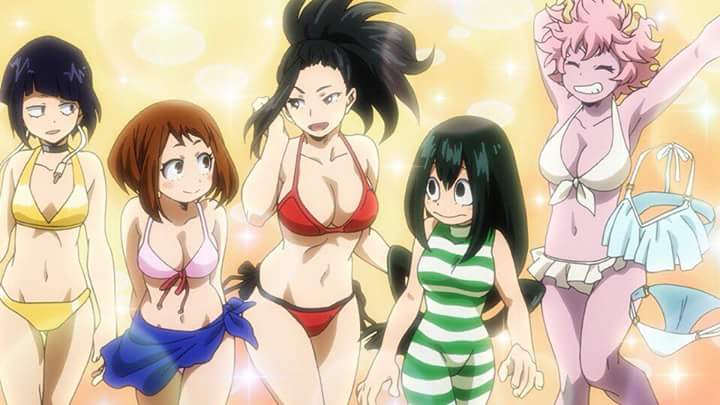 With lockdown keeping me from hitting the beach during the most recent heat wave, I’ve had to live vicariously through my favourite medium: anime. And if there is one thing we at Rice Digital love in our anime, it’s a beach episode.

Ah yes. The sun. The water. The big, beautiful opportunities for character development!

Oh, did you think this was going to be a pure fan-service article? Nope! Buckle in, folks, cause we’re about to talk about how to write realistic, engaging, deep characters.

Don’t worry, though. There will still be some fan-service. We know what we’re about here.

Why A Beach Episode?

The beach episode trope has been around for so long that I couldn’t tell you exactly where it originated, but it is pervasive enough to have an extensive page on TV Tropes. In many shows and video games, they are often filler or added either just before or just after a high drama moment and serve as a relief in the tension that the characters have been stuck in as well as an excuse to draw the characters in even less clothes than usual (or, in the case of Grey from Fairy Tail, slightly more clothes). They can be poignant but often times they err on the side of silly comedy.

That comic relief is important for pacing. You can’t be tense all the time, either as a character or as a viewer. We need moments of levity to cleanse the palate before our team of mecha pilots defend the planet from giant space monsters once again. Typically, this is the sole purpose of a beach episode, but the best uses of this trope can use them to accomplish something much more useful.

There is something else that beach episode accomplish that shouldn’t be overlooked, and it has to do with portraying real characters. One of the best bits of writing advice I have been given was to focus on the more mundane aspects of the characters in order to flesh them out and make them deeper and more relatable. What is their favourite foods? What is an item that they never leave home without? How do they interact with each other when their lives aren’t on the line?

Persona 5 is a very good example of using the beach episode to explore the characters’ personalities. We see the extent of Futaba’s growth from the shut in she had been just a few weeks earlier. Ryuji and Morgana clash more and more, something that would become a much bigger problem a little bit later in the game. Yusuke acquires lobsters for reasons that are both baffling and terrifying to everyone else.

All of these things give us reasons to care about new characters and root for them, set up future conflicts that threaten to tear the team apart, and establish that no matter where they go, some people will find ways to be weird for the sake of weird. All of this humanises these kids, reminding us that these are just teenagers trying to live their lives while also saving the world.

Darling in the Franxx also used their beach episode to allow the characters to further explore the world and what it means to be human when they are primarily used as weapons to destroy giant robotic monsters. In a show that is not exactly subtle, this episode reminds us that these are just kids who have been left to raise and teach themselves, forcing them to unravel many of life’s greatest mysteries, such as love and where do babies come from, with what little information they can find.

But don’t worry. You still get to see Zero Two in a swimsuit. They’re not monsters. They just want you to care about why you’re seeing it.

There is so much more to a good beach episode, both in video games and anime, than simple fan-service. The best ones will use this as a chance to deepen the themes of the story, explore character motivations and development, and set up new arcs and conflicts for when they get back to fighting giant robots/space aliens/evil homeroom teachers.

Plus, we get to see all our waifus and husbandos splashing in the water, which is just a delight.