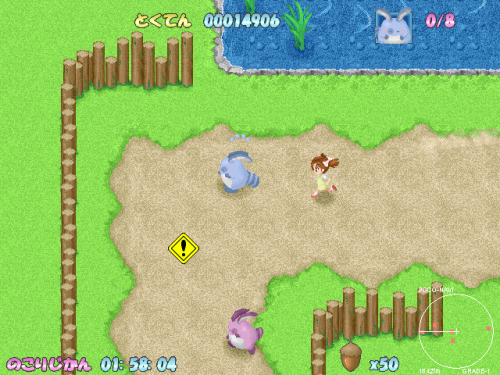 In Fushigina Morino Pokora you play as a little girl who is trying to catch cute creatures called Pokora which are stealing acorns. Featuring some adorable visuals and innovative controls this game quickly breaks from the mold placed by other games.

Your goal in this game is to catch as many Pokora as you can within the given time limit. To help you in this endeavor you have a radar shows you the location of these furry creatures. Considering you have a limited amount of time you won’t be able to take your time and plan an attack, instead you will be charging head on toward the evasive Pokora.

Fushigina Morino Pokora has an interesting blend of genres, using racing-like controls as weird as that may sound. You basically use 2 buttons besides the directional pad: forward (or gas if you prefer) and jump which allows you to hop over obstacles that might get in your way.

This game will put your driving skills to the test in every level. Mastering techniques such as drifting early on is important, because hitting an obstacle head on will knock you out for a bit losing precious seconds in the process. Even though these controls may take a bit of getting used to they introduce an entertaining way of getting around. To help you grow accustomed to this new control scheme there are a couple of practice levels with no time limit.

You can also do a rocket start by standing still and holding throttle and jump. This is perfect to get a jump start on those tricky little demons. If you are running and press throttle and jump you will do a dive allowing you to gain the last couple of steps needed to catch a quick Pokora.

You will notice that some Pokoras carry acorns. Catching one of them grants you all the acorns that it was carrying. Collecting enough acorns allows you to purchase new clothing between levels that give you specific stat bonuses.

Pokoras themselves are pretty annoying little devils. They run as fast as you, never miss a turn and generally love hoping over the most difficult obstacles. Even though it’s fun trying to catch them sometimes they are too slippery for their own good, frustrating the hell out of you when you miss the amount you need to collect by one.

All levels loops so after running some time in one direction you will appear in the same place you started. This allows the Pokoras to use a specific route over and over again forcing you to either think up a better plan or start chasing another one of them. You will also come across different terrain. Walking in mud slows you down to a walking pace. Rivers are impassible but you can jump over them to get quickly to the other side. Beware of falling into the river because it restarts you from the point you started your jump taking up your precious time.

Some levels also feature other elements such as wild boars. Once they start chasing you they never stop. The only way to stop a wild boar is to make it ram into an object, knocking it out for a short period of time.

Scattered throughout the level you will find objects that once collected need to be brought back to a specific shrine in order to gain a temporary power up. This encourages exploration even in a tight time frame, because a speed boost from these powerups is always welcomed.

Fushigina Morino Pokora has some of the cutest graphics I have seen in a doujin game. Everything is extremely colorful and the levels are brimming with details: Cicadas sing happily on trees, butterflies and dragonflies fly around, and even birds scatter when approached.

Fushigina Morino Pokora is one fun game. It will keep you entertained for some time hunting those fast evil Pokoras. With great graphics and innovative controls this is definitely a game for everyone. As with most of these old doujin games the company that developed the game is defunct, but fortunately there is a freeware version you can download.