Listen, I know that I am a well-documented fan of the more intimidating waifus that anime has to offer, but sometimes a little sweetness goes a long way too. Which is why I’ve been so smitten with Marin Kitagawa in My Dress-Up Darling. So, with the first season of the anime halfway over, I wanted to celebrate 2022’s early favourite for Best Girl.

This Waifu Wednesday, we’re getting our cosplay on and taking a look at the bundle of joy and enthusiasm that is Marin Kitagawa — and why you will love her if you give her a chance.

Who is Marin Kitagawa?

When Gojo Wakana goes to school at the start of My Dress-Up Darling, he sits alone, quietly stewing in his own insecurities and fears about his passion for Hina dolls. That is until Marin Kitagawa flies across the room for reasons that are never explained or even pondered. She bumps her head on his desk and the two have a brief conversation before going their separate ways. It isn’t until the two meet up in the abandoned sewing room of the school that they truly connect.

Marin, the most popular girl in the school, reveals that she doesn’t think Gojo’s passion is weird or girly. In fact, she shares her own passion with him: she wants to be a great cosplayer and bring her favourite character in the whole world to life with Gojo’s help. This starts the two down an adorable path that sees them grow closer, overcome their insecurities, and make some impressively cool-looking cosplays in the process. All while Marin’s bubbly, joyous, outgoing personality brings out the passion hiding just beneath the surface of Gojo.

That passion and joy is really Marin Kitagawa’s defining feature. She is unashamed about the things she loves, revelling in the fact that she is fashionable, cool, and trendy while also incredibly nerdy about the anime and eroge that she obsesses over. She doesn’t scoff at anything that someone loves without reason, encouraging them to be loud and proud about the things that fill their life with happiness.

Yes, Marin is gorgeous and, yes, both the anime and the manga give you plenty of fan service of her in her various costumes, but it is the little interactions between her and Gojo that make the series deeper than that. The way she switches from excited and confident in her appearance to suddenly shy to be around the boy she likes or the moments when she does her best to build him up and support him are what makes Marin Kitagawa one of the best anime girls we’ve seen in a long time.

My Dress-Up Darling has proven to be one of the more popular shows in the winter anime season, which isn’t a huge surprise to us, to be honest. The show’s animation, concept, and characters are all intensely fun, but the highlight of every episode so far has been Marin Kitagawa. The excitement that she exudes when she talks about one of her 50 all-time number one favourite characters is infectious and keeps the series from becoming too reliant on fan service or the inevitable will-they-won’t-they plot that unfolds.

Marin Kitagawa is one of the more refreshing characters in anime at the moment. Not because she is so unique, as there are plenty of other “gal” characters to choose from that deserve your love, but because she spends so much of her time building up those around her. She openly admires other cosplayers, telling them how much she likes their pictures and their characters. She encourages Gojo to follow his dreams and promises to do what she can to make them happen. She is, simply, a good person who also happens to be so cute I want to die every time I look at her. (Please don’t die, I’ll take her away from you if I have to – Ed.)

If you’re on the fence about watching My Dress-Up Darling, you can catch every episode streaming on Funimation, and the manga is available on Amazon.

The glorious rise of the slice of... 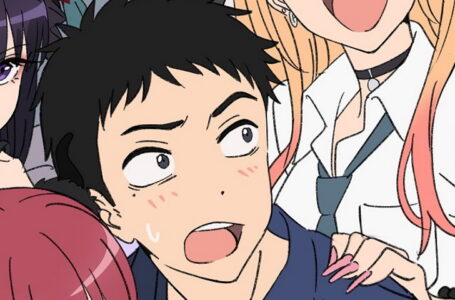