Considering what we often play around here, a few of our video game discoveries can be a little bit on the gratuitous side — perhaps a little too much at times.

One can feel a sense of odd “shame” when playing certain games can for any number of reasons. But we’re all friends here at Rice Digital — so let us celebrate our favourite guilty pleasure games that others more often than not pass up on.

And in order to avoid mentioning plenty of games we’ve already covered here that could easily fit the bill, or probably should have been included, here are three titles I’ve been enjoying in secret for long enough!

UPPERS was a release I was excited to see localised ever since it first came out on Vita back in 2016. Its vibrant colours, great looking cast and satisfying, “off the wall” gameplay made it an easy addition to my collection. And on top of that, it’s basically the male equivalent of the Senran Kagura series.

That last aspect is backed up by UPPERS having been designed by Senran Kagura’s very own Kenichiro Takaki. And since his iconic slogan is “tits are life, ass is hometown”, I was excited to see the same be applied to men this time around. For their manly brawns and beautifully built physique I mean, with all due respect. (We know exactly what you meant – Ed.)

While I continue to mourn the slow and agonising death of hope when it comes to UPPERS ever getting a western physical release, the game as it stands provides an entertaining and refreshing take on Takaki’s staple beat ’em up formula. We follow the brotherly duo of Ranma Kamashiro and Michiru Sakurai in the city of Last Resort Island to become the top brawlers of the area — all for the prize of attaining the highest amount of female attention.

UPPERS’ seemingly mindless gameplay manages to have its own merits that set it apart from previous games of the same calibre. The Rise-Up mechanic temporarily boosts your character, allowing for longer combos, and can be concluded with a button mashing sequence that either invites your partner into the pummelling for extended damage, or acts as a tag out system.

Where I get embarrassed is when I want to avoid letting down the lovely ladies in the audience; when fulfilling their requests in the fight, they’ll reward players with a sequence that never fails to put a blush on my face.

And there are plenty more of these moments. The same impressed ladies who hand you love letters to restore your health in the fights will happily offer up their panties as the ultimate prize for beating humorously juvenile looking opponents. A way to a girl’s heart — and undies — has never been so quickly assessed before.

UPPERS is all fun and games, and with a pair of characters who look as good in action as they do when posing, I find myself feeling no better than the excited bystanders of the game. Now Atlus, bring back Badass Rumble so I can feel like a high-school juvenile without having to hide my laptop when all the panties cover the screen. Please.

UPPERS is available in English exclusively on Steam.

To say that Yokai’s Secret serves its main purpose for the majority of its players is an understatement. With a bare-bones plot and mediocre writing, the title does little more than to simply set its main stage; most of its care, attention and detail has been devoted to its explicit H-scenes.

The levels consist of a varying amount of differently coloured blocks that need to be put into gradient order. This is not accommodating for anyone with colour-blindness, but the sound and sparkle animation that indicates a correct placement may be enough to help such players. And while there’s a constantly ticking clock, its only purpose is in the pursuit of Steam achievements — you can otherwise take as long as you’d like to clear each stage, with no need to rush.

The experience is a relaxing one when we take this into account. The game can take less than an hour to completely clear, and puts up almost no resistance whatsoever. This should not be seen as a negative, however, when taking its small asking price into account. And with great character designs and animation, a crisp presentation and gorgeous UI, it still shocks me how much of a peaceful and fun time can be had with it. Yokai’s Secret was a nice surprise, and I won’t keep it a secret any longer.

Yokai’s Secret is available on Steam, with a free R18+ patch.

When I think back to some of my earlier video gaming adventures, I bump into the memories of TimeSplitters, Tomb Raider, and the sensationally problematic The Bouncer. Despite being everything bad that could have gone wrong with the vastly superior Jackie Chan Stuntmaster, The Bouncer was my earliest exposure to the brawler genre. And for all the issues it had, it still has me coming back even in 2021.

There’s something almost sacred about big companies’ biggest flops. They are so entertaining to behold for what they did so very wrong — and the overwhelming reaction to them only ever increases the peculiar charm of these creations that are unloved and barely remembered.

The Bouncer was Square Enix’s highly anticipated first PS2 game. Backed up by frequent, strong marketing, it seemed likely that the title would succeed and be regarded as one of the greatest additions to the promising new system’s launch lineup — and as part of an impressive library of games in general.

Lo and behold, its sales were poor, the reception was mostly mixed, and the legacy of the title is nowhere to be seen. (I have a copy – Ed.) If anything, it continues to be regarded to this day as Squaresoft’s worst ever game. And this only makes me love it even more.

The awkwardly high-energy announcement of the title every time it’s booted up; its iconic design decision to have everyone wear the least helpful clothing considering how frequently they get into fights; and, of course, the gift of Volt, the beginning to my video game crushes. These are just a few personal reasons as to why I adore this game.

Additionally, the way The Bouncer requires multiple playthroughs to experience the full story is an aspect of gaming I’ve come to actively seek out in other titles as an adult — as evident by how I sink far too long into visual novels. Its ragdoll physics never fail to be humorous and entertaining for all the wrong reasons. And while the game was made to play out as an interactive movie — a fact that resulted in far too many cutscenes that heavily outweighed the time spent in actual “gameplay” — I fail to see the problem, since it delivers exactly what it set out to be. It’s just that people expected something different.

To the majority of its potential player-base, The Bouncer was a great example of what not to do with a brawler. But it has just as long a list of good points — although I’ll freely admit some of these may be down to me being a little blinded by nostalgia.

Its cheesy dialogue, the crazy story that starts off off with ninjas kidnapping our main girl in a bar and concludes on a spacecraft, and its great visuals both in terms of character design and world stages… all of this makes The Bouncer a bizarrely memorable one for me. And I wouldn’t change a thing about it.

The Bouncer is exclusive to the PS2. 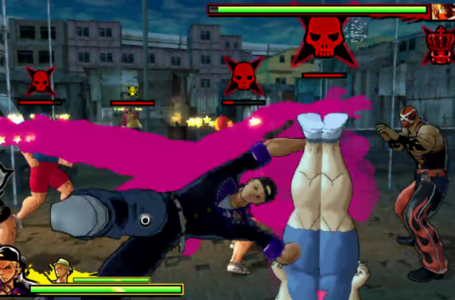