Before you get mad at me, I want to reiterrate, I REALLY ENJOYED IT – but the fact remains, even four years a go, it was a JRPG that had one foot firmly in the past, the battles could be interminably dull, the framerate, at times, was shocking, even though it wasn’t exactly the most technically demanding game in the world, and I found some of the music nauseating. But! And this is a big BUT! I still liked it. I liked it for it’s adorable whimsy. It’s silliness. The often amusing dialogue, and the fact that it felt, so, so… relaxing in its totally throw-away nature. You could turn off your brain and go with the flow, it was the B-Movie of jrpgs, and I totally had the feels for it. The kind of feels that make you feel a bit guilty, sure – like the feels you have for your best friends mum when she’s loading the dishwasher in her Yoga pants – but feels all the same.

So, yeah… where am I going with this… oh right – I was nervous about this Hyperdimension Neptunia Rebirth Review. The worry was that playing again, after  – what, three years? –  would mean I’d have to cast my steely critical eye over it and flag up its obvious flaws. Thankfully though Rebirth has gone to great pains to make some important changes to the original game. Changes fans of  ‘Mk2’ and ‘Victory’ will recognise – but important changes all the same.

The biggest and most important change is the stripping out of the old turn-based battle lines of the original and in its place the same battle system from MK2 – with the EX Gauge system from Victory. What this means is, upon activating a battle in the field (hit first for the advantage mechanics are GO!) and you can freely run around the stage and target enemies with an AoE box. Before stabbing the face butting for a pleasing approximation of real-time attack mechanics, even though it’s really totally turn based.

This feels much more involving than in the original – and seeing as you’re going to be doing a fair bit of grinding, this is very welcome, particularly as you can hit multiple foes simultaneously to speed up battle a little. It also allows for much more strategy than before as well, as it gives you back so much more control than the original’s obstinate battle system. I can’t overstate just what a massive, MASSIVE difference this has made to my overall enjoyment of this game. The battle system also has plenty of hidden (actually not that hidden at all) depth to it – in that you can fiddle around with different combos and partnerships with the other girls in order to maximise damage output. It’s not 100% necessary (you can just keep your head down and grind through) – but it’s there all the same and a welcome diversion to help mix up combat and see what kind of results you can get from paying a bit more attention to the detail of the mechanics.

The other change fans of the original will notice are the ability to jump in the dungeons – woo-hoo! – and the ability to treasure hunt using search sphere. This is basically a move that sends a radar ping out from your body so you can find hidden items in the dungeon. A small thing I guess, but it’s a reason to jump back into dungeons and scour the place for stuff while in a grinding session. Lastly, we have the Remake system. This is pretty smart actually, in that, as you harvest items, you can use the remake system to change the game world. Alter the items you find in dungeons, make enemies weaker or stronger, change items in store – little options that you can toggle on or off to subtly change how the game works.

I guess for some of you, these changes won’t really mean much if you’ve not played the original – but the upshot of it is, that they help turn a game from a cult-hit-that-was-kinda-not-that-great-really into a sweet little JRPG that-plays-rather-nicely-now-thanks. Sure, you’ve always got the feeling that this is a JRPG stripped to it’s constituent parts because it’s a little low on budget – but I’m really okay with that. Bare-bones JRPG it may be, and certainly not epic in any way shape or form – but it’s charming, fun and has a lot of heart. It’s very difficult not to love.

If you’ve never played Hyperdimension Neptunia before – then I guess at this point I should explain a little more, because, really – this next bit is do or die in terms of whether or not you’re going to want to give it a go.

The premise is silly. It’s basically a anime/moe personification of the console war. Lastation, Planeptune, Lowee and Leanbox are the regions, represented by goddesses who are locked in eternal battle. No prizes for guessing that they represent real-world consoles. In story terms, you’re Planeptune – Or Neptune, or Nep-Nep (yeah!) who’s defeated in battle, suffers from amnesia and falls into the care of Compa and Iffy, characters representing the game’s developer and publisher in Japan, Compile Heart and Idea Factory.

I hate to use the phrase ‘breaking the fourth wall’, because every time I hear anyone using it, it makes me want to suck air through my teeth and give them a ‘playful’ dead arm, but really I totally hate them.

But here I go anyway. This is all about the breaking the fourth wall (*vomits*)

It’s very self referential – and there are constant little quips and jokes about games, anime and otaku culture. Personally, I like it – but that’s not really a surprise to you, is it.

As with so many Compile Heart games, there’s so much dialogue in this game it’s crazy. It’s very heavy on the character portraits and dialogue skits, that you have to really like this stuff to get the most out of the game. It’s so light on world content and gameplay that these skits are low-budget padding – quite what your threshold is for that, only you will know. I’m fine with this – but I understand that there a lot of you who aren’t.

Still, it can’t be denied that in terms of characters and dialogue, this is absolutely one of Compile Hearts best series – and the localisation and voice work in this is excellent.

I’m a big fan of the crispness of Compile Hearts design and as ever, the Vita’s lovely-o-screen makes the colours really shine. I also really like the way the portraits kinda expand and contract as though they’re breathing, with just a little bit of boob jiggle in there for good measure. I don’t mean it in a creepy way, I mean it in a – ‘it kinda makes it all feel a little bit more dynamic’ kind of way. This is important for a game that’s basically lots of dialogue and workman-like dungeoneering. It all combines to make it feel happy and vibrant and fun to while away the hours to.

So I guess I’m ending this Hyperdimension Neptunia Rebirth review on a resoundingly positive note. Rebirth is the remake that the original game so desperately needed. Fixing so much of what was wrong, wrong, wrong with the original, polishing it, removing many of the annoyances and tweaking it so that it’s everything the original should have been. And yet at the same time it’s retained all that was good about it – it’s warmth and it’s heart.

As a result, it’s the entry point that this series deserved, is an excellent addition to the Vita’s awesome JRPG catalogue – and a game that both newcomers and fans of the original would do well to check out. 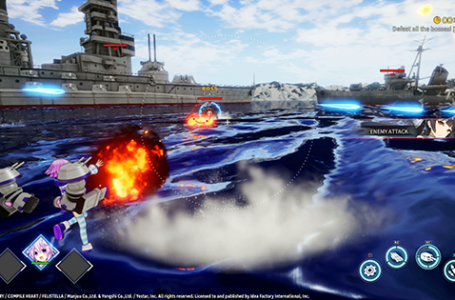