Twenty-seven years after the events of Ace Combat 3: Electrosphere, the world had a new sport to enjoy: combat between multi-legged sliding tanks known as VEHICLEs. The heyday of this sport is depicted in Namco’s Cyber Sled, originally released to arcades in 1993 and ported to PlayStation with some graphical enhancements in 1995. The Japanese Wii Virtual Console also got the arcade version back in 2009, and if you’re lucky you might still find the PS1 version on the PS3 and Vita’s PlayStation Store.

Taken in isolation, Cyber Sled doesn’t seem all that important to the overall UGSF timeline that encompasses so many Namco games; indeed, the official website for the timeline barely spends a single paragraph describing it. Being a game with not much in the way of story, it’s easy to see why there’s perhaps not a lot to say about it — but considering what comes next, it is a game that sets up a certain amount of context.

Specifically, the tank-like VEHICLEs you pilot in Cyber Sled in a purely competitive way go on to become formidable weapons in the hands of the UGSF as they attempt to strike back at rebel forces. But that’s a story for next time. All you need to know for now is that Cyber Sled’s purpose in the overall UGSF timeline primarily revolves around the things you’re piloting.

At heart, Cyber Sled is a one-on-one vehicle combat game. You select from one of several different characters at the start of the game — with each bringing their own unique VEHICLE along for the ride — and then attempt to establish dominance in the arena by defeating as many opponents as possible. Each character, of course, has their own identifying graphic, plus their own strengths and weaknesses. And in the tradition of fighting games, they have plenty of things to say to one another both after winning and being beaten!

In the single-player mode, there’s a cast of characters to defeat one after another, fighting game-style; at the end of your championship run, you’re scored based on how accurate your shots were and how quickly you defeated your opponents. You’re then given a letter-grade ranking according to your score. The game can also be played against a friend, either on separate screens in the original arcade version or on a horizontally split screen on the PlayStation port.

The original arcade version featured twin joysticks to control your VEHICLE, allowing you to slide around and turn. The PlayStation version, being from a time before the DualShock controller, features a slightly cumbersome control system where you slide using the D-pad and turn using the L1 and R1 buttons. It’s obviously not quite as comfortable as the arcade version’s controls, but it does the job in a pinch.

You have two main weapons in Cyber Sled: a machine gun and missiles. The machine gun can be fired for a limited period before it overheats, but otherwise has unlimited ammunition; missiles, meanwhile, are limited in quantity, but can be refreshed by collecting pick-ups around the arena. Your aim is simple: deplete your opponent’s shield before they do the same to you. Both of your weapons can be useful for this purpose; the machine gun can do some decent damage if you have a nice clear shot at your opponent, while missiles are great for popping out, launching then ducking behind cover again.

Charging in for a head-on assault in Cyber Sled will get you killed very quickly, so each battle turns into something of a game of cat-and-mouse as you attempt to outwit your opponent and find reasonably safe spots on which to fire at them. It’s an early example of cover being used effectively in a 3D combat game, and once you get into the rhythm of things, it’s actually a lot of fun — if a little repetitive after a while, particularly in the single-player mode.

But then you have to remember that this was a coin-op originally, and as such it was all about the overall experience, not just the game itself. When playing Cyber Sled in the arcades, it was about the enjoyment of sitting down in a big, imposing machine — preferably with a friend in the seat next to you — then grabbing those joysticks and enjoying some all-out combat action. It didn’t matter that a match could be over in less than 20 seconds; for those 20 seconds, you were there in that combat arena, battling for supremacy.

Obviously with this in mind, the PlayStation port loses something in the translation to the home, but it’s still an enjoyable arcade-style combat game, and particularly fun if playing against a friend. The graphical enhancements are a nice touch, too — though the purists are also able to turn off the new texture-mapped objects and switch the game back to its original flat-shaded polygonal look if they so desire.

These days, we’d probably question the value of this as a “full-price” game, but you need to remember that in the same era people quite happily paid up for the PS1 version of Ridge Racer, a driving game with just four tracks in total.

Today, picking up a copy of Cyber Sled for PlayStation can range from mildly pricey to absolutely extortionate, so if you want to add a real physical copy of this to your collection, be sure to shop around before splashing more cash than you need to. As a relatively obscure title, don’t count on this coming to Sony’s new “PS1 games via PlayStation Plus” thing, either, so your alternative options are… well, I’ll leave them to your imagination.

Is it worth the effort to seek out? Perhaps; it’s far from Namco’s finest game, to be sure, but it’s an interesting early example of a competitive multiplayer combat game that works pretty well, and definitely enjoyable against a friend. And, if you’re some sort of crazy person attempting to chronicle the entire UGSF timeline through its video games, then yes, well, of course you should play it… 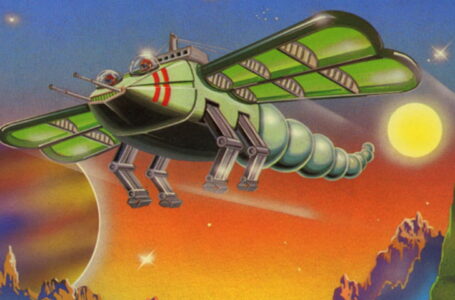