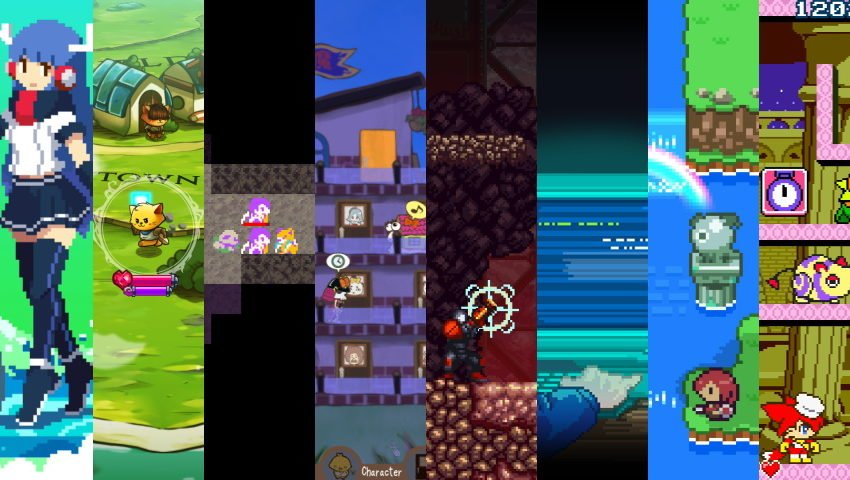 We know how it is. It’s not quite payday, but you want something new to play on your Nintendo Switch, the one thing that has been keeping you sane. But what? Video games are so expensive these days, and you wanted to save the last few fumes in your bank account for a pizza to celebrate surviving another month of our collectively miserable existence on this planet.

Never fear! There are some video games out there that aren’t as expensive as others, and as it happens there’s some bangin’ titles among them too. So here’s a fine selection of Nintendo Switch games you can bag for under a tenner each. Should keep you busy for a while!

Looking for something sexier? Check out our list of the best sexy games on Switch!

Inti Creates’ excellent reimagining of the Sunsoft NES classic is one of the finest examples of the company’s approach to “enhanced retro” — it’s a game that looks authentically 8-bit, but does a whole bunch of things that simply wouldn’t have been possible on old-school hardware.

The game is a sprawling, open-structure side-scrolling adventure with top-down dungeons, fearsome bosses and a variety of cool weapon upgrades to collect and fiddle around with. And with optional DLC packages, you can even play as a variety of other characters, including Ekoro from Gal*Gun, Shantae and Shovel Knight.

Kamiko is a top-down hack-and-slash adventure with a strong focus on speedrunning. As one of three different characters, each with their own very distinct loadout of weapons and abilities, you’ll have to cut your way through hordes of enemies, solve puzzles, find your way through the labyrinthine levels and destroy some fearsome bosses.

The whole thing is presented in a gorgeous retro style, with beautiful pixel art and some stirring chiptune music. And while the game itself doesn’t change with each replay, trying again and again in order to get a faster time becomes very addictive after a while — particularly since a single run of the game only lasts about 15-20 minutes or so.

Nab a copy of Kamiko for Switch here.

While superseded by its sequel (which you can actually get in a physical double-pack with this game), the original Cat Quest is still a great time, offering an open world hack-and-slash adventure with a ton of loot to grab, plenty of quests to solve and a variety of hidden secrets to uncover.

Widely praised for its solid pacing and consistent forward momentum, Cat Quest is a game you should try if you’re after an RPG that doesn’t get bogged down in minutiae, and which gets to the point pretty quickly. Also, cats.

Cat Quest for Switch is all yours at this link.

Yōdanji is a “coffee-break roguelike” designed to be played in quick sessions, but which offers considerable depth over the long term as you attempt to track down and acquire all its available playable yōkai characters.

With cute pixel art and strong influence from Japanese folklore, this is a great title to have ready to go on your Switch at any time — sometimes you’re just in the mood for a quick adventure in which you play as a licky umbrella.

Conjure up a copy of Yōdanji for Switch here.

Combining elements of tower defence, management sim and RPG, Unholy Heights is a very unusual game — but one that is a lot of fun once you get to grips with the way it does things.

As The Devil, it’s your job to collect rent, improve your apartment block and take advantage of your various monstrous tenants to fend off the relentless attacks from human heroes. Because while you may want nothing more than a quiet life, humanity seems to think your very existence is a threat. I hate it when that happens.

Get yourself a copy of Unholy Heights for Switch here.

Do you like Super Metroid? Do you like action roguelikes? Then you are going to love A Robot Named Fight, a game that shamelessly lifts the aesthetic, mechanics and overall feel of Super Metroid and transplants it into a procedurally generated world filled with revolting gooey monsters and spiky death traps.

As an action roguelike, this is a game with potentially infinite replayability, and thus it’s a great title to have ready to go at any time on your Switch. And if you really like it, Premium Edition Games are planning a variety of physical versions for you to have on your shelf later in the year — find out more here.

Make A Robot Named Fight into A Game Called Buy on Switch here.

Sometimes, when the existential dread of your daily existence all gets a bit much, the best thing to do is to just lean into it and enjoy a thoroughly spooky game. Often you’ll come out of the experience thinking that things aren’t quite as bad as you thought they were, and that trip to Tesco you’ve been putting off probably won’t kill you this time.

In STAY, you follow the exploits of a young man named Quinn, who has awoken in a locked room with nothing but a computer in it. By communicating with him through the chat room on the computer, you have to help him escape — or perish. It’s a fascinating, replayable game that is a great fit for Switch.

If you enjoyed Kamiko, you may be interested in some of the creator’s other work — and the Fairune Collection is a great way to explore it. Consisting of the two Hydlide-inspired puzzle RPGs Fairune and Fairune 2, plus the original “Fairune Origin” prototype and an excellent shoot ’em up featuring the characters from Kamiko, this is an excellent value package filled with wonderful games.

Don’t let the Hydlide comparison put you off; the two Fairune games are what happens if you take the original ideas of Hydlide and apply the things we’ve learned about modern game design to them. They’re a delight.

Acquire yourself a copy of Fairune Collection for Switch here.

If you’re a fan of single-screen “kill all the enemies” platformers in the classic Taito mould, Whip! Whip! is well worth your time. Taking on the role of foxgirl pastry chef Tira, it’s your job to search for a legendary sweets recipe by beating up enemies with a mystical glove-shaped golem named Minton.

Longstanding Taito fans will be pleased to hear that COSIO (aka Hirokazu Koshio), a former member of Taito’s in-house sound team ZUNTATA, composed the music for this one — when combined with the lovely pixel art, we have a very authentic-feeling late ’80s/early ’90s-style game.

Whip up a copy of Whip! Whip! for Switch here.

After the success of the excellent Cave Story, Daisuke “Pixel” Amaya decided he wanted to do something a bit different. Rather than making another open-structure, exploration-centric game, he instead wanted to make something that was a bit more traditionally level-based. And the result was Kero Blaster, an excellent run-and-gun title with some strong inspiration from Contra.

Like Pixel’s other work, Kero Blaster marries solid gameplay with a surprisingly dark narrative — this time around, he takes aim at modern working culture, in which people often feel obliged to go well above and beyond the call of duty for little to no compensation or reward. Next time you have a bad day at work, tell yourself at least it isn’t as bad a day as Frog is having.

Clock in for some time with Kero Blaster for Switch here.