You guys like the Shonen Jump Big three reference there in the title? I hope so. I’m a massive One Piece fan, I’ve been following along with the series since it first started airing here in the UK. Starting with the dubbed anime and now I’m waiting week by week for the next chapter of the manga. One Piece is a tremendously popular series that has broken record after record, and cementing itself as the King of Shounen Jump. Alongside the anime and manga, One Piece has had a handful of films made as well. My personal favourites being: Strong World, Film Z, Gold, and now One Piece Stampede. Stampede feels like, more than those before it, a celebration of everything One Piece. Watching it made me feel like I was being rewarded for being a fan all these years. So, let me tell you guys why I love it! Now, I don’t think Bullet is anything groundbreaking when it comes to the villains in One Piece and to be fair, it would be incredibly difficult to set him up as one throughout the span of a single film. However, Bullet poses such an immense threat to our crew and their rivals/allies that he single-handedly makes the film a continuous hype-train that doesn’t stop until the end credits.

Bullet, also known as the Demon heir, was a child soldier who later joined the crew of the infamous pirate king, Gol D. Roger. Because of his past as a soldier, Bullet values strength above absolutely everything else. When I say strength, I mean individual power. No allies or partners, he views those as detrimental and a hindrance in his pursuit of more power. As a result, he constantly seeks out battles with anyone and everyone he meets. Gol D. Roger was the only man to ever defeat Bullet in combat, and in defeating him, Roger tried to teach Bullet that strength comes from having those around you that you wish to protect. Bullet does not believe this to be true but comes to admire Roger for his strength anyway. After Rogers’ death, Bullet was imprisoned in Impel Down for 20 years, before breaking out during Luffy’s attempts to save Ace and the mass release caused by Blackbeard.

Bullet now has one goal, to become the man considered the strongest on the planet, the Pirate King. In order to achieve this, Bullet sets up the Pirates Expo alongside the brains of the operation – Buena Festa, to gather all the crews on the Grandline in order to defeat them. As a result, Bullet would gain more notoriety and defeat whichever strong foe comes his way. Nothing is considered as going too far when it comes to gaining strength for Bullet, even summoning the infamous ‘Buster Call’ just to gain the attention of the Navy’s strongest. His power is insane and it’s because of this that we get to see some of the incredible fights and alliances that we live for in One Piece, and god does this film do them so well. 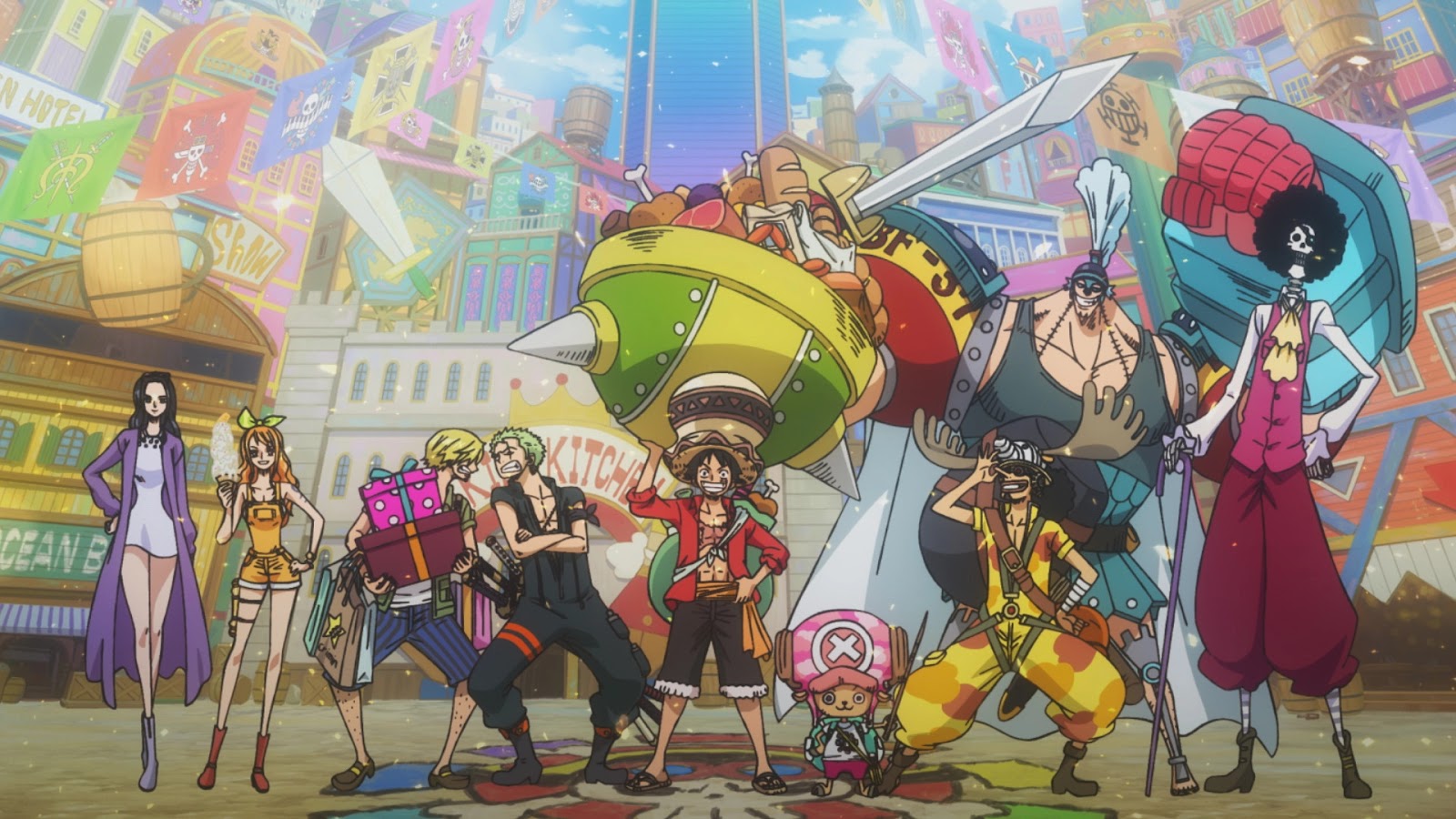 From start to finish this movie dishes out some of the most insane and over-the-top spectacles that One Piece is known for. As soon as the film kicks-off, hundreds of pirates are seen sailing into Delta Island to attend the Pirate Expo. Originally the pirates were under the impression that competing in the Expo’s events would give them a chance at gaining one of Rogers treasures that had been found. However, there is something much more sinister going on behind the scenes.

As soon as the events begin, we see an island floating inside a bubble which is only accessible by travelling up the ‘knock Up Stream’ – a huge upwards travelling geyser reminiscent to that of Skypiea. The Straw Hats take the initiative by making use of their Coup de Burst and propelling themselves into first place on the journey to the floating island. Now, if this was any other anime this would sound insane, but in the world of One Piece, this is what we expect!

The fights, oh my lord the fights! Specifically the last fight is completely bonkers with a villain, quite literally, larger than life. Meanwhile hundreds of pirate crews battling against the marines on the verge of unleashing the dreaded Buster Call. It’s a visual spectacle that you absolutely need to see for yourself.

A Celebration of One Piece and it’s Fans

I mentioned it early on, but this film felt like a present from Oda to the fans of One Piece. If you’ve been along for the ride since the beginning, or only just started watching a couple months ago, this film will feel like it was made for you.

Just look at the character list for this movie! There are so many characters from past arcs that make appearances throughout Stampede, some of them making their presence known almost immediately. For example, we get to see:

Buggy as he’s trying to track down Trafalgar Law.

Wapol from the Drum Island arc.

Crocodile who has infiltrated the Pirate Expo in a pursuit of personal gain.

Even Foxy and his Noro-noro beam make an appearance!

Best of all, the entire ‘Worst Generation’ are there!

Speaking of the ‘Worst Generation’, The film gets even crazier when the main cast have their first encounter with the Demon Heir himself, Douglas Bullet. Not only do we get to see a fight between Luffy and Bullet, we get to see him face-off against the whole of the ‘Worst Generation’. Getting to see all of these characters participating in the same fight as they slowly get beaten one after the other gives you this feeling of dread, like this guy Bullet is the real deal.

The icing on the cake however, lies at the ending fight. When all seems lost with Bullet becoming something no single person could hope to defeat, and the island is surrounded by the Navy just waiting to begin their bombardment. We get to see an alliance consisting of some of the most loved characters in One Piece.

As they execute a plan that Crocodile came up with. So many incredible moments come from this scene. One in particular, immortalising Boa Hancock as an absolute badass whom you should never insult Luffy in front of. Another wonderful moment being when Luffy finds Rogers treasure and does what Luffy does best. It’s the parts of the film like this that make it something special, that One Piece fans will remember fondly as a gift from the series’ creator. So thank you, Oda!

Those are my big three Reasons you guys should be checking out One Piece Stampede. It’s One Piece how we like it most, which even more fanservice that’ll put a smile on your face.

Our One Piece Stampede review.

You can pick up One Piece Stampede from Amazon or MangaUK, and you can even get a nifty steelbook!

Latest posts by Conor Evans (see all)
Spread the love!
Tags: One Piece