As I’m sure most of you are already aware, there are continuous delays affecting the anime industry due to the ongoing pandemic. This means that some series are being delayed until later in the year, but this isn’t something to complain about! In fact, we should be taking advantage of this opportunity to check off some of those series we have in our backlogs. I’ve tried to keep them all different with regards to their genre, but a couple may slightly overlap. Here are 5 of my recommendations for anime to watch during lockdown! 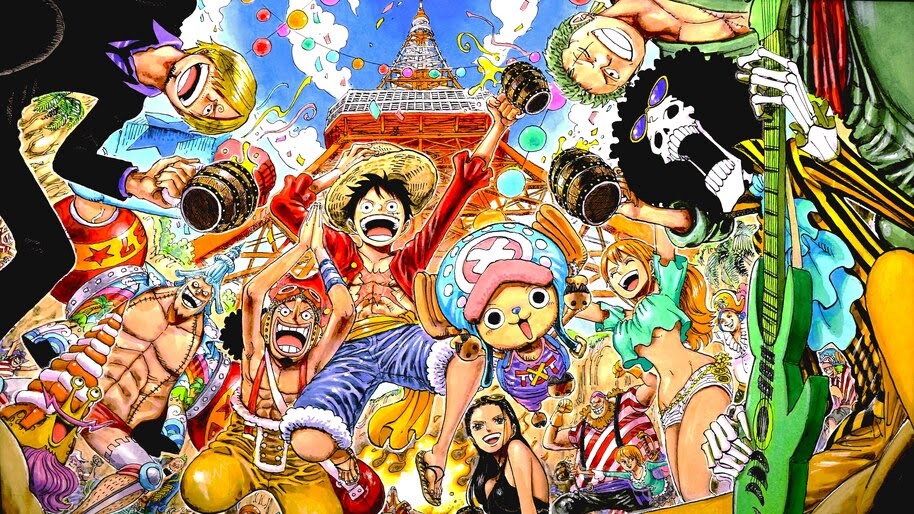 After the Great Pirate King Gol.D.Roger leaves all his treasure, One Piece, hidden somewhere on the Grand Line, with his dying words he ushers in a great age of pirates! Monkey.D.Luffy a young boy from a small village in East Blue sets out to become the next Pirate King. However, in order to achieve this dream, he needs to assemble a crew and make his way to the Grand Line!

Hear me out. One Piece has been one of the best selling manga and most popular series for a reason, it’s genuinely that good. One Piece is bursting at the seams with a wonderful world filled with all sorts of varying landscapes and biomes that our characters travel through. The characters are fantastic, each having their own unique personality and backstory. A character like Usopp grew up fairly normally, but wants to become a ‘Brave warrior of the Sea’. Whereas someone like Nami is hiding a darker backstory from the crew during the earlier parts of the story.

With such a long series that has such a huge and full world, there is more than just the main story of the series. There are all sorts of mysteries and unanswered questions, even now as someone who has been reading One Piece every week for a long time now, we still don’t know the answers to these mysteries. Things like this add to the world and keep you wanting more.

I suppose I should address the elephant in the room, which is the series’ length. One Piece’s manga debut was in 1997 with the anime then catching up with the first episode in 1999 and we’re still ongoing in 2020. I’m sure I don’t need to tell you how many episodes there currently are.

As a man who just wants to spread his passions to others, I’ll give you my opinion on how to go about giving the series the best shot possible while not having to go all-in. Watch up until the Arlong Arc beginning at episode 31 and ending at episode 44, for me, this is where One Piece became something really special. The content before this arc is still great and you’ll meet numerous crew members and some awesome characters, but the Arlong Arc is where One Piece began its journey as the Shounen King, for me personally.

And hey! If you end up enjoying it, that just means there’s a load more episodes for you to look forward to. Plus, Nico Robin. She is the true One Piece.

Monogatari Series – You’ve not seen anything like this before 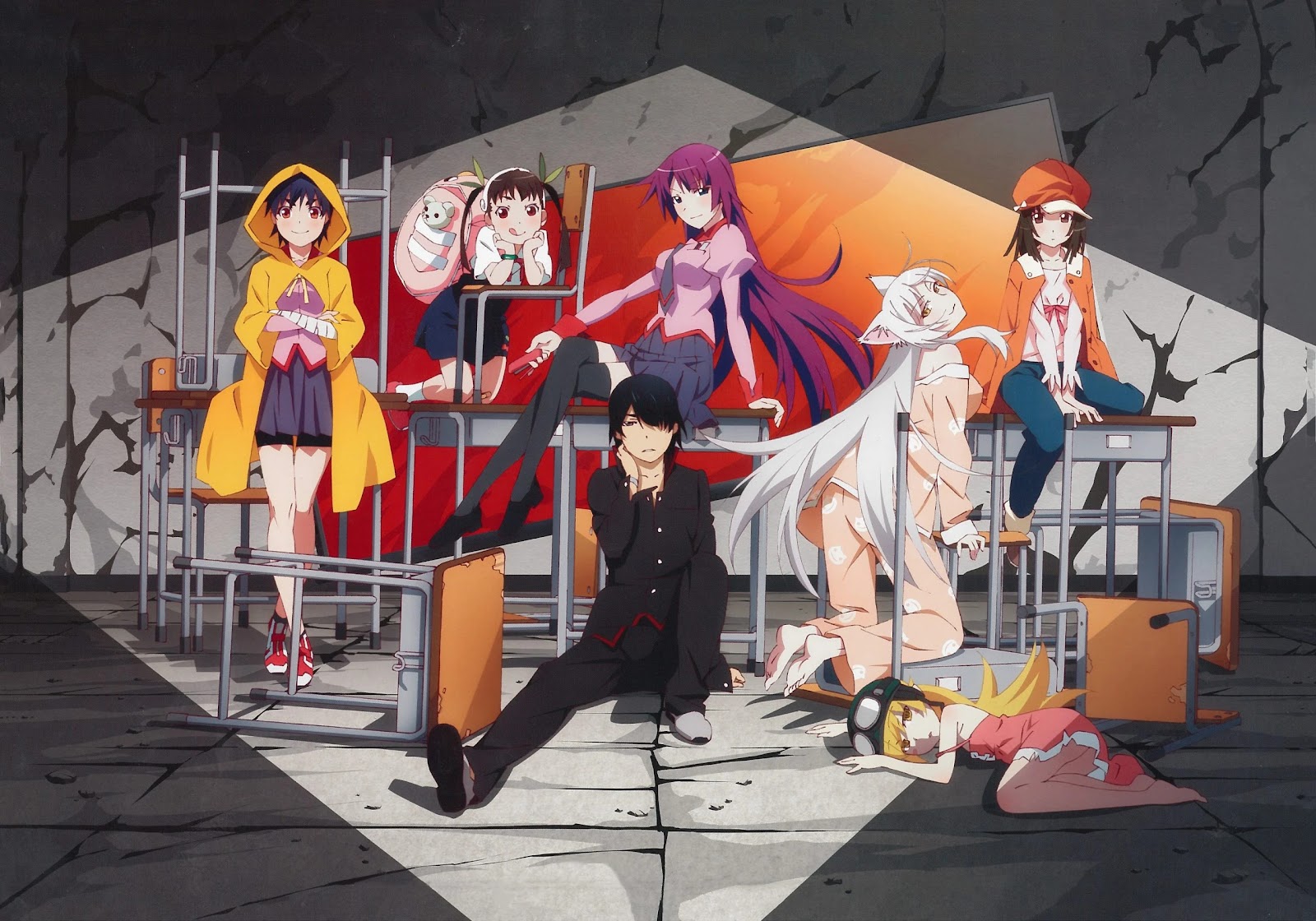 The Monogatari series revolves around Koyomi Araragi, a third-year high school student who has almost restored his humanity after briefly becoming a vampire during spring break. One day, a classmate of his, the reclusive Hitagi Senjōgahara, falls down a flight of stairs at school into Koyomi’s arms.

As I’ve mentioned in the subtitle, the genre I would give to the Monogatari series is most definitely well-suited. It is an incredibly unique series and for numerous reasons. For one, the way the series is directed is interesting and unlike anything I’ve seen before. When watching, you’ll notice these frame’s appear on the screen for a very short period of time. The main one’s you’ll notice are the ‘Black’ frame and ‘Red’ frame. The show is, for the most part, told from the perspective of one of the characters. Usually the protagonist, Araragi Koyomi, so the black and red frames that flash on screen for short periods of time are meant to show him blinking. It’s quite frankly an odd choice, but I personally love it.

The characters are some of the best I’ve seen in any series, with Koyomi Araragi and his “shadow” Shinobu Oshino aka Kiss-Shot Acerola-Orion Heart-Under-Blade(I’m serious) being two of my all-time favourite characters ever. Each character is incredibly unique and deep, like some seriously deep and dark stuff. One of my personal favourites is the story surrounding Tsubasa Hanekawa and how her tough life at home, school life, and romantic feelings are causing her intense amounts of stress, but she always suppresses these and refuses to let them show. Because of this, events begin to unfold.

It’s quite difficult to put just why this series is so phenomenal into words, because there really is nothing to compare it to. If you’re thinking about giving the series a try, please just watch Bakemonogatari and see how you feel from there. 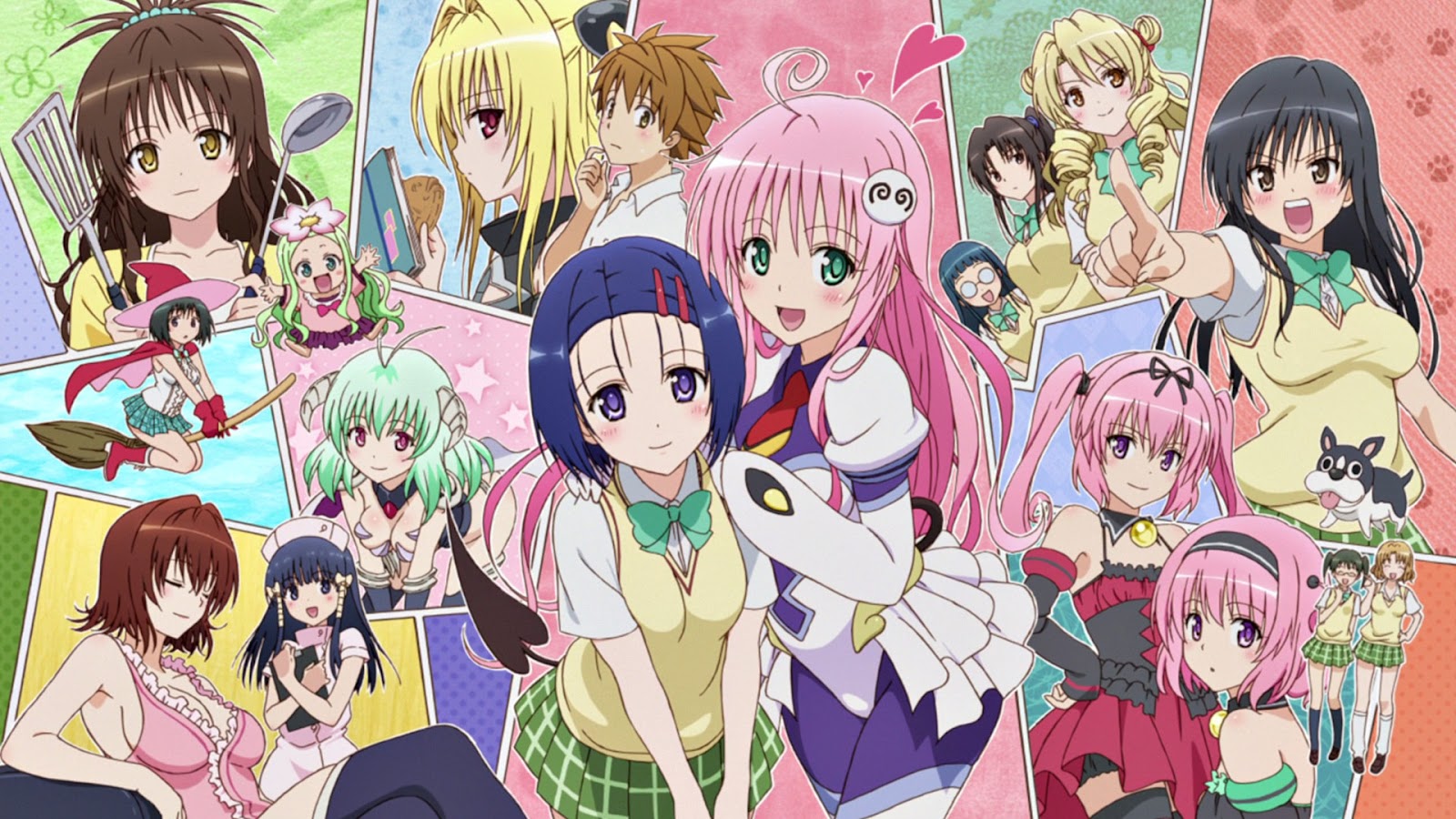 The story of To Love Ru revolves around Rito Yuki, a shy and clumsy high-school student who cannot confess his love to the girl of his dreams, Haruna Sairenji. One day he meets an alien by the name of Lala Deviluke, a runaway princess determined to marry Rito. From this point on, Rito’s life would be filled with ecchi excitement, thanks to Rito Yuki’s uncanny ability to make any accident become perverted.

Ah, the harem of harem anime. To Love Ru is an absolute classic of the genre that’s a perfect mix of comedy, romance and ecchi along with some adorable characters that should appeal to almost everyone. I wanted to add something like this because we always need a series that doesn’t require too much emotional dedication. You always need that kind of series that you can take a break while watching the nonsensical madness take place on screen, and I think To Love Ru is great for that!

To Love Ru is 3 seasons long, the first season consists of 26 episodes and the next 2 seasons both consist of 12 episodes. When it comes to a series like this, I would suggest watching after a series that has taken a lot out of you. Maybe you just finished Violet Evergarden or Anohana and need to watch something easy. Give To Love Ru a go, you deserve an emotional break. 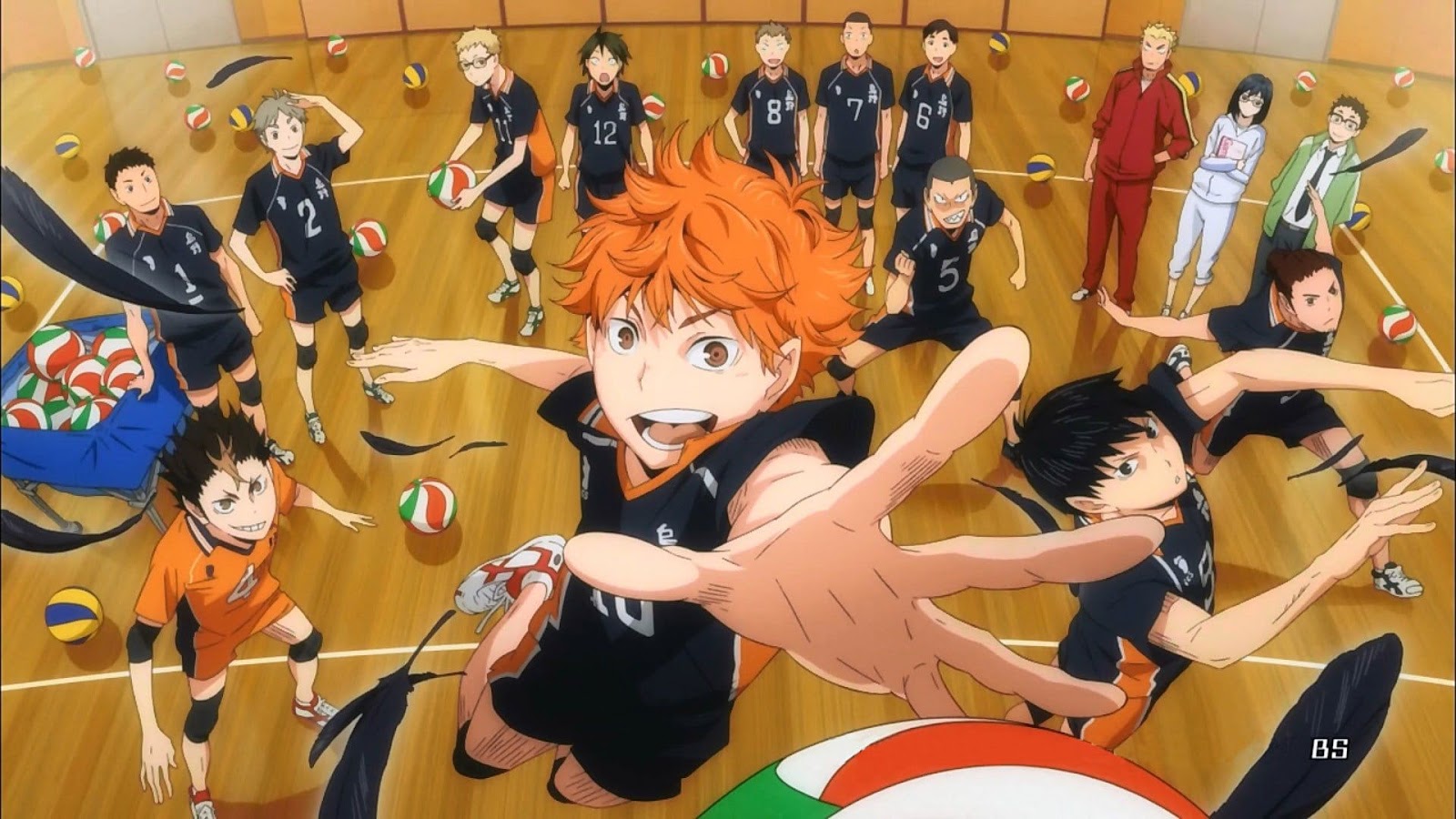 DO NOT OVERLOOK SPORTS ANIME!  You hear it all the time, “If I’m going to watch sports anime, I would just watch the real thing” This response is wrong in every single way. People tunnel-vision on the ‘sport’ and forget the anime part. It’s still a story that is revolving around a sport, the same way a romance is a story revolving around a relationship(s). I have chosen Haikyuu because I really think that this series is taking it to the next level when it comes to sports anime.

It is a Shounen, but it’s still very much based in a world where the players don’t have super powers… Looking at you Kuroko no Basket. Hinata Shouyou isn’t a mirror of Goku in a sports setting, he’s a small guy playing a game that favours the tall. Already, you want to root for him! Each match played introduces new characters who all have differing views on the sport from our main cast. Different teams display a new talent which Karasuno has to overcome. For example, Date Tech have a focus on their impenetrable defensive playstyle, while Karasuno uses a rushdown-style of play centering around Shouyou and Kageyama, the team’s setter. Haikyuu has this superpower that will affect you when you watch it. You’ll want to get up and do something. It’s incredible.

Lastly, sports anime in general will open your eyes to all of these sports and view them in a new way:

I think what I’m trying to say is that sports anime are great and you should watch them. Shizuku Mizutani is apathetic towards her classmates, only caring about her grades. However, her cold view of life begins to change when she meets Haru Yoshida, a violent troublemaker who stopped attending class after getting into a fight early in the school year. He is not much different from her, though. He too understands little about human nature and doesn’t have any friends. Much to Shizuku’s surprise, he proclaims that she will be his friend and immediately confesses his feelings towards her upon meeting her.

Man, there are so many series that came to mind when it comes to the romance genre. Toradora, Golden Time, Say “I Love you”, Ao Haru Ride, Bunny Girl Senpai, Kimi Ni Todoke, Sakurasou, and so on.

Romance anime is a wonderful genre that is usually considered as being aimed towards a female audience. The magazine that most of these series are published in is called Shoujo, which you may have seen on the genre listings for series such as those listed above, but that shouldn’t push any male readers or watchers away! Romance series are fantastic pieces of work that will get you as invested as any great Shounen would.

I settled on My Little Monster or Tonari no Kaibutsu-kun as it’s one that still sticks out in my mind as being an extremely enjoyable watch. It centres on these two characters who don’t fully understand human interactions. Shizuka Mizutani is socially awkward and doesn’t care for anything other than studying. Yoshida Haru is misunderstood and something of an outcast due to his reputation for being violent and a troublemaker, but really he’s a lovely guy who immediately declares his feelings for Shizuka. We get to watch their attractions for one another development, while helping each other learn to care and grow as people.

My Little Monster only has one season consisting of 13 episodes so please go and give it a watch! 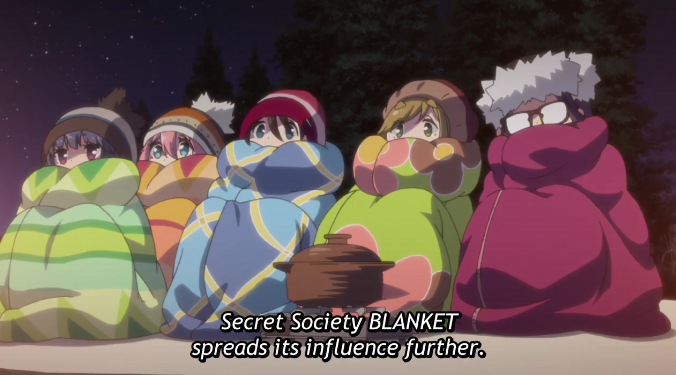 There was no way I was going to make a suggested anime list and not include Yuru Camp! I love it, it’s so wholesome and relaxing, it’s the best!

Anyway, passionate rant aside, let me know what you guys think. Any anime suggestions? Leave them down below!