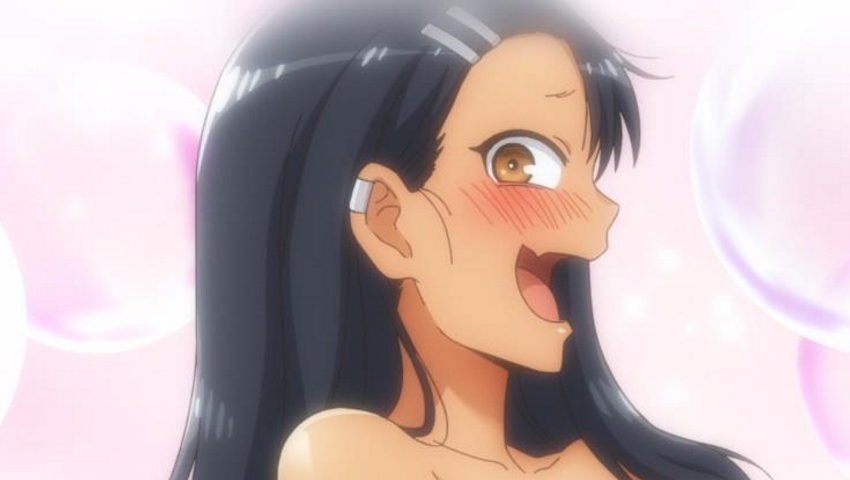 While it’s easy to assume that Don’t Toy With Me, Miss Nagatoro is simple “mean-girl” fetish bait, the manga has, to date, proven that it’s a lot more intelligent than many people might initially assume.

With that in mind, then, an anime adaptation was always going to be a risky prospect — despite how keen people seemed to be to see it happen. Could the relatively condensed format of an anime series successfully capture the subtle nuances found in the manga? Or would fans of Nanashi’s distinctive blend of comedy and pathos continue to be best served by reading rather than watching?

With the first episode of the Don’t Toy With Me, Miss Nagatoro anime now available on Crunchyroll, it so far seems that we don’t have a lot to worry about — which is doubtless causing plenty of Nagatoro fans to breathe a sigh of relief.

If you’re unfamiliar with Don’t Toy With Me, Miss Nagatoro, the concept is relatively simple. We follow a male protagonist — known only as “Senpai” throughout the story — as he inadvertently establishes a relationship with a girl a year younger than him. Senpai initially assumes that Nagatoro, the girl in question, is one of the sort of people that he is keen to avoid; having been bullied for most of his life, he has developed something of an instinct for people he feels somewhat uncomfortable around.

Initially, Senpai’s fears appear to be justified; Nagatoro’s friends find an amateur manga he has been working on and begin to mock him for it, and Nagatoro joins in. But there’s something different about the way she behaves; while definitely taking the piss, she’s also engaging with his work on a level beyond “hah, how lame”. She recognises the manga’s main character Siegfried as a self-insert for Senpai, and points out that in his current state, Senpai would never be able to pull off some of the cooler things that Siegfried does.

Clearly unaccustomed to this level of interaction with another person, Senpai’s response is to burst into tears, and Nagatoro gives — not lends — him her handkerchief to dry his tears, apologising for messing with him before she leaves. From here, Senpai seems to have trouble shaking Nagatoro off; she’s taken an interest in him for one reason or another, and while what she does to him is still pretty much emotional abuse, he finds himself realising that he actually doesn’t mind it so much if it’s her. Her behaviour feels different to when he has been bullied in the past, though initially he’s not quite sure how to explain this.

In the original manga, Senpai points out that his typical defence mechanism against those who abused him was to shut out the world and forget the faces of those who hurt him. Over time, he began to mistrust pretty much everyone — reflected in the manga’s presentation by the fact that everyone other than Senpai (and, subsequently, Nagatoro) has very ill-defined facial features and lacks eyes. Since large eyes are typically one of the most immediately identifiable aspects of a manga or anime-style character, removing them altogether is an effective means of “dehumanising” them from a stylistic perspective.

The anime remains true to this presentational convention; in the opening scenes of the show, none of the background characters we see have any eyes, and indeed Nagatoro is shown completely eyeless until she starts interacting directly with Senpai. From this we can infer that Senpai has likewise taken an immediate interest in Nagatoro — and only partly because his initial interaction with her is unavoidable — and sees something in her that he doesn’t see in anyone else.

Oddly enough, Senpai clearly starts to feel a curious (and possibly misplaced) sense of trust in Nagatoro; he points out in both the anime and the manga that he’s “never cried in public before”, and yet in the space of the first episode he cries openly twice in front of Nagatoro and, despite some token protestations, he doesn’t appear to feel overly embarrassed about the fact.

Rather, we can infer that he’s feeling a peculiar sense of relief that he’s found someone that he can “be himself” with to a certain degree; his crying at Nagatoro’s behaviour rather than simply shutting her out — “turtling”, as the anime puts it — suggests that he feels oddly comfortable around her, and that this is an unfamiliar sensation for him.

As of the first episode, the Don’t Toy With Me, Miss Nagatoro anime certainly hasn’t skimped on exploring and presenting the subtleties of the way Senpai feels around Nagatoro, and if the show manages to keep this up it’s going to be a very effective, authentic adaptation of the source material indeed. The manga is quite a slow burn as it shows Senpai gradually coming out of his shell over the course of several volumes; he clearly starts to become more and more comfortable with Nagatoro — and eventually with some of her friends, too; following the series’ presentational conventions, their whole faces are, of course, revealed at this point.

The anime is presented really nicely, with some lovely use of colour showing different times of day — with the frequent use of sunsets providing a pleasantly nostalgic feel — and an impressive amount of detail in the backgrounds. The animation is actually very high quality, too, particularly in the scenes that show Nagatoro and Senpai close up; since the series as a whole is about the subtleties of interaction between people and how relationships are about more than just the words that are said, it’s very fitting that the anime shows us more subtle pieces of body language and facial expressions as well as the more comically exaggerated scenes.

Nagatoro in particular is very well handled. While constantly overflowing with energy and animated accordingly, she displays a wide array of facial expressions and body language in just this first episode, helping us to understand that she’s more than just a mindless “genki girl”. In particular, a key part of the original Don’t Toy With Me, Miss Nagatoro manga is the almost immediately palpable sense of overwhelming sexual tension between the pair, and this is very much the case in the anime, too. It manages to be sexy without being overly fanservicey or explicit — and this, again, is very true to the original manga.

So far, then, things are looking good for the adaptation of Don’t Toy With Me, Miss Nagatoro. It remains to be seen how far through the current run of the manga we’ll get in a single season, but it’s going to be fun finding out, for sure!