My degeneracy continues with this One Piece Waifu Review, because you guys seem to like them so much. Honestly, I can’t thank you guys enough, because I love writing this EXTREMELY cultured and high-IQ content. If you guys have any requests for series, games, anything you would like to see a Waifu Review on, please let us know in the comments, on Twitter, or through the Rice Digital Discord. Just @ your boy! 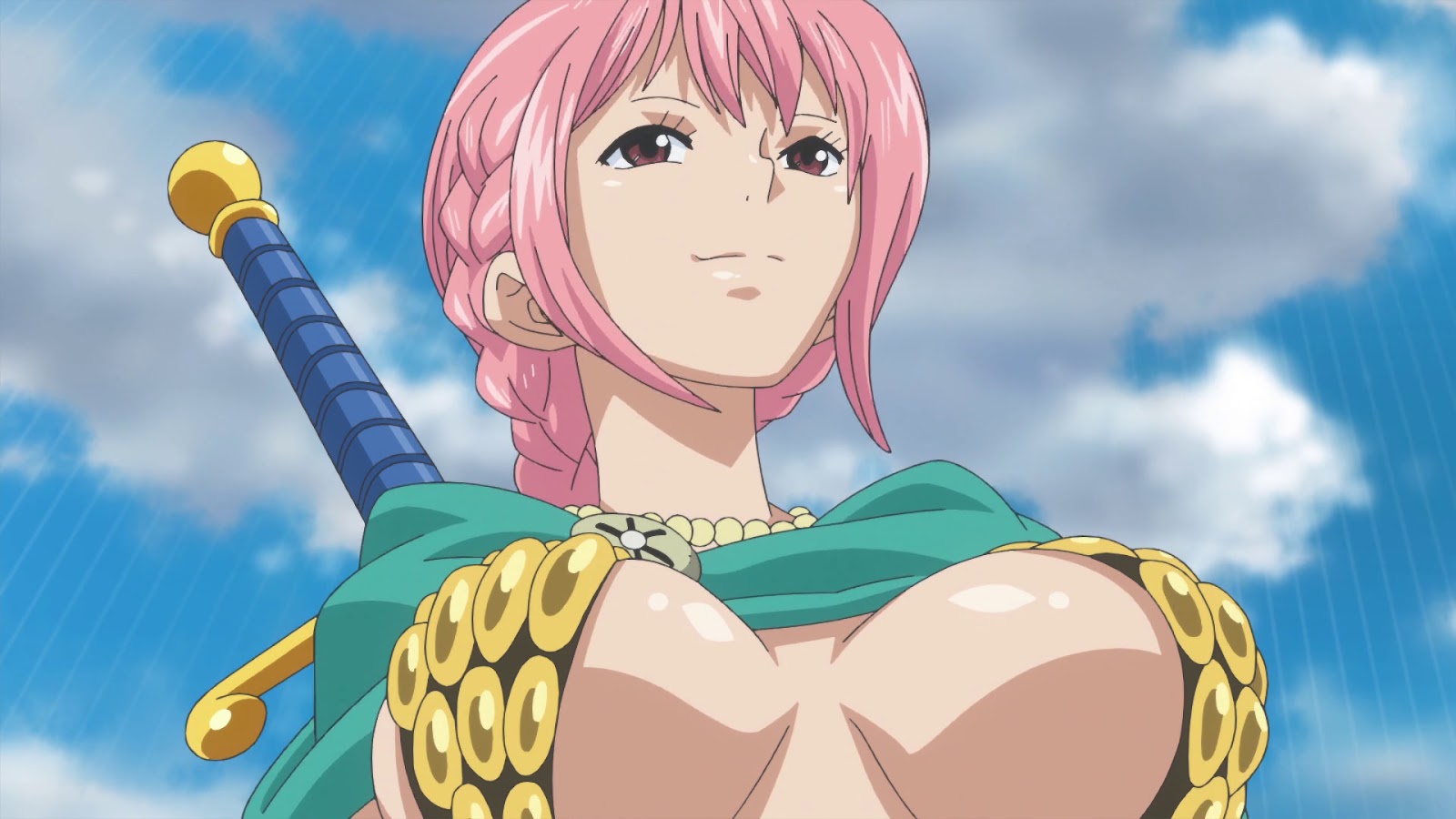 We first meet Rebecca during the Dressrosa arc in the Corrida Colosseum, an event set in motion by Doflamingo with the winner being rewarded with a Devil Fruit. Rebecca is a strong, calm and proud warrior who harbours a lot of hatred towards Doflamingo. Rebecca has a somewhat tragic past regarding her parents, despite this past, she tries to keep these feelings inside and keep up a strong exterior. On top of all this, Rebecca’s a real cutie! 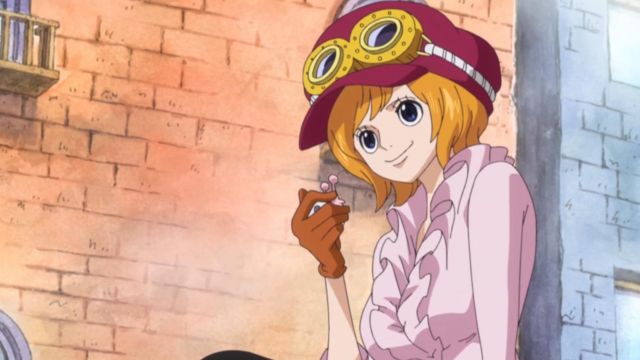 Koala has a truly awful past that has made her into a really awesome character. She was originally kidnapped at the age of 8 and sold into the world of slavery. During an attack on her enslavers, the Sun Pirates and their Captain Fisher Tiger freed the slaves being held there. Koala managed to escape to an island, before meeting Fisher Tiger again, and being taken back to her home island. 3 years later, Koala joins the Revolutionary and becomes a Fish-man Karate instructor in honour of her rescuer. 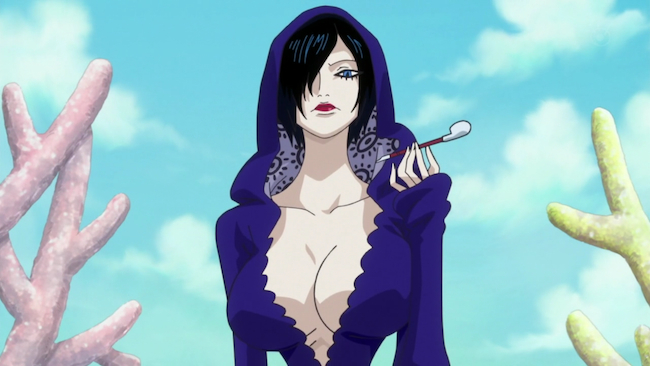 Ma-DAM Sharley is the mako shark fish-man and half sister of Arlong. She is the owner of the Mermaid Cafe and a fortune teller who introduces one of the most puzzling and interesting  mysteries to the story of One Piece. She has that hot-gothic look that we weebs love; short-ish dark hair covering one eye along with a loosely-buttoned hooded top. Best fish-girl. 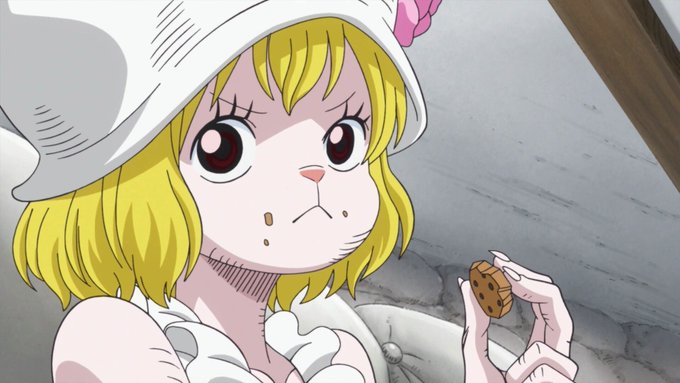 The rabbit mink from the warrior beast tribe, Carrot, a fairly new addition in the grand scheme of the story, who has been travelling with the Straw Hat crew for some time now. Carrot is an adorable rabbit-girl who is extremely caring, energetic and dedicated to the people who matter most to her. Despite only knowing Luffy and the rest of the crew for a short period of time, she is willing to fight alongside them and protect them. Being a member of the Mink Tribe, Carrot can tap into the power of her “Sulong Form” when under the light of the full moon. A badass transformation that retains all of Carrot’s adorableness. 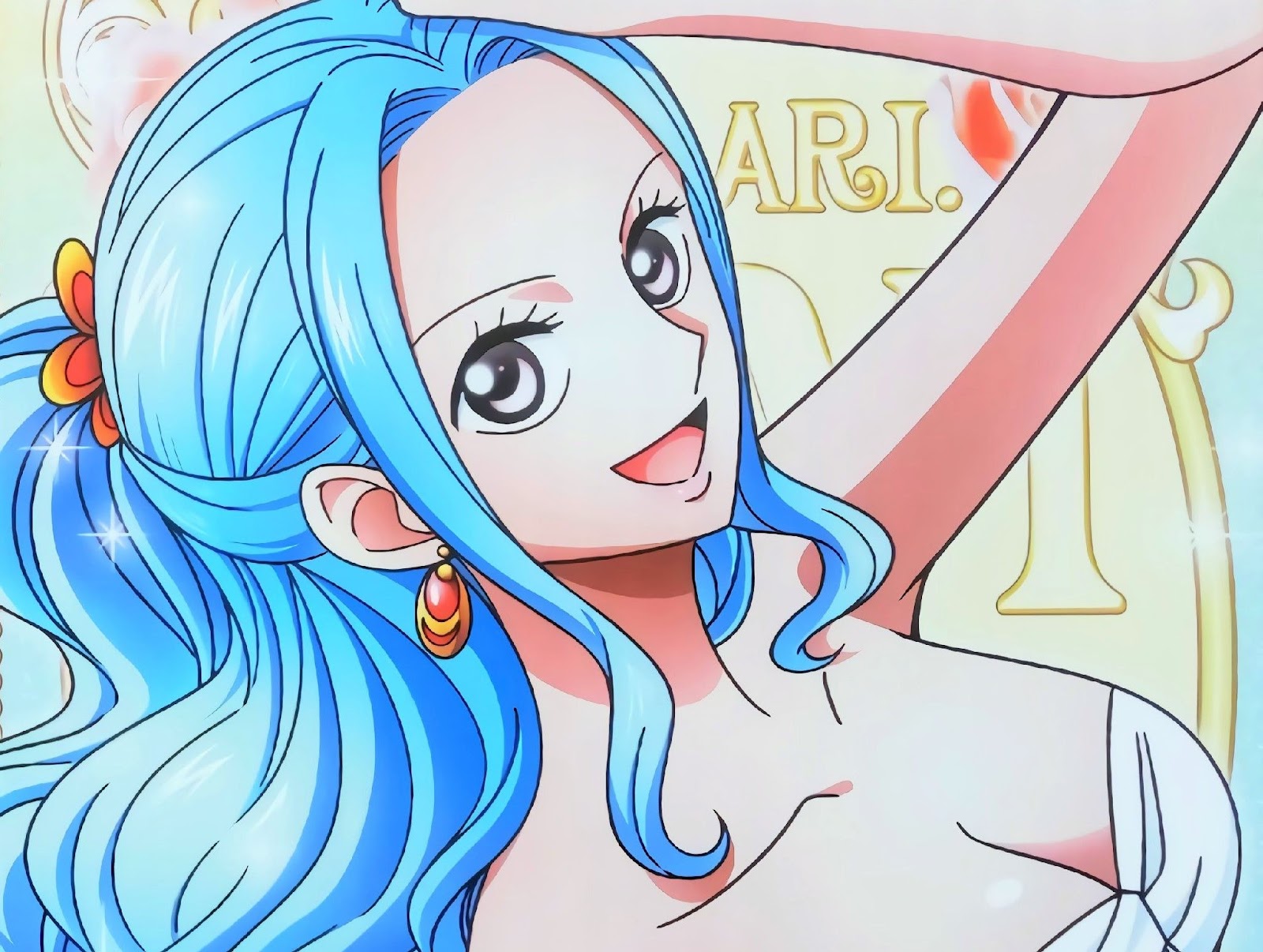 Originally appearing in front of the Straw Hats as an antagonist under Baroque Works with the code name “Miss Wednesday”, Vivi is revealed to be the Princess of Alabasta. Joining the crew for the entirety of the Alabasta arc, Vivi is an extremely driven and committed woman who would put herself in extreme danger in-order to see the land she comes from remain safe. Vivi helps with Luffy’s developments as a leader, while Luffy helps Vivi in admitting that she needs help. Due to her commitment as princess of Alabasta, she is unable to officially join the Straw Hat crew. However, she is considered an honorary member, whom all of the Straw Hats cherish as a friend and crew mate. 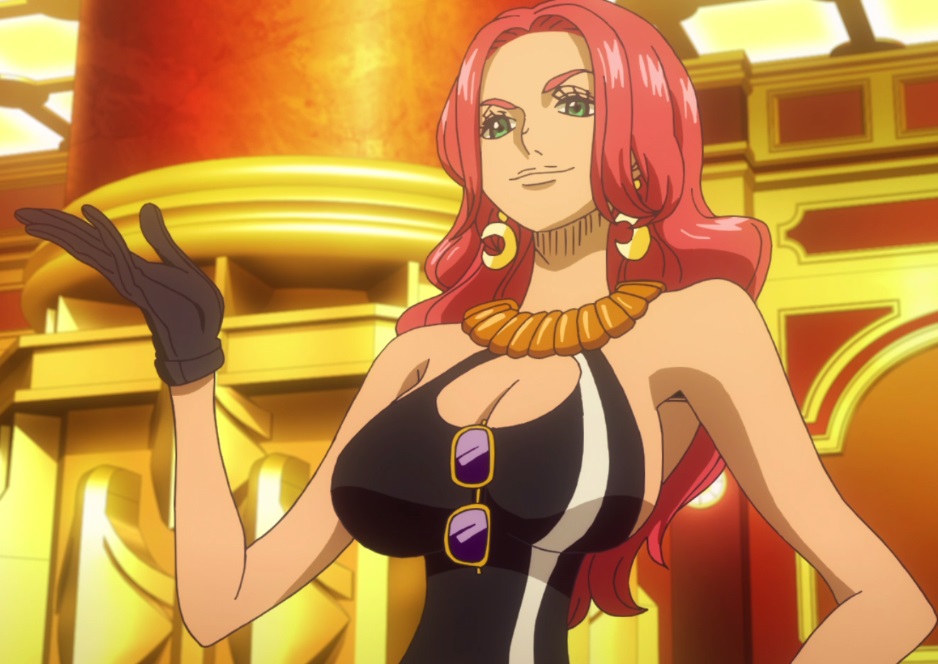 You guys know how I operate by now. Assuming you’ve seen the past Waifu Reviews, you should know that dark-skinned anime girls are my kryptonite and despite only appearing in the film, One Piece Gold, Baccarat is no exception to this. I mean just look at this character, Oda have mercy on me. I’m being fairly shallow when it comes to Baccarat, but give me a pass on this one. There are a lot of serious waifu check-boxes being ticked here, let me explain.

I’m going to stop, my degeneracy is spilling out too much.

Reiju Vinsmoke, also known as Poison Pink, is the elder sister of Sanji and eldest child of the Vinsmoke family. She is the princess of the Germa kingdom, a seafaring kingdom of science, and the commander of the military unit, Germa 66. Reiju is one of the characters that really tricks you multiple times before you can develop a solid opinion of her. When we first meet Reiju, we like her! Shortly followed by actions that cause us to dislike her, but then ultimately redeeming herself. I don’t want to dive too much into specifics, but there is a lot to like about Reiju and her relationship with her brother, Sanji, is a big contributor to this. Plus, just look at her! 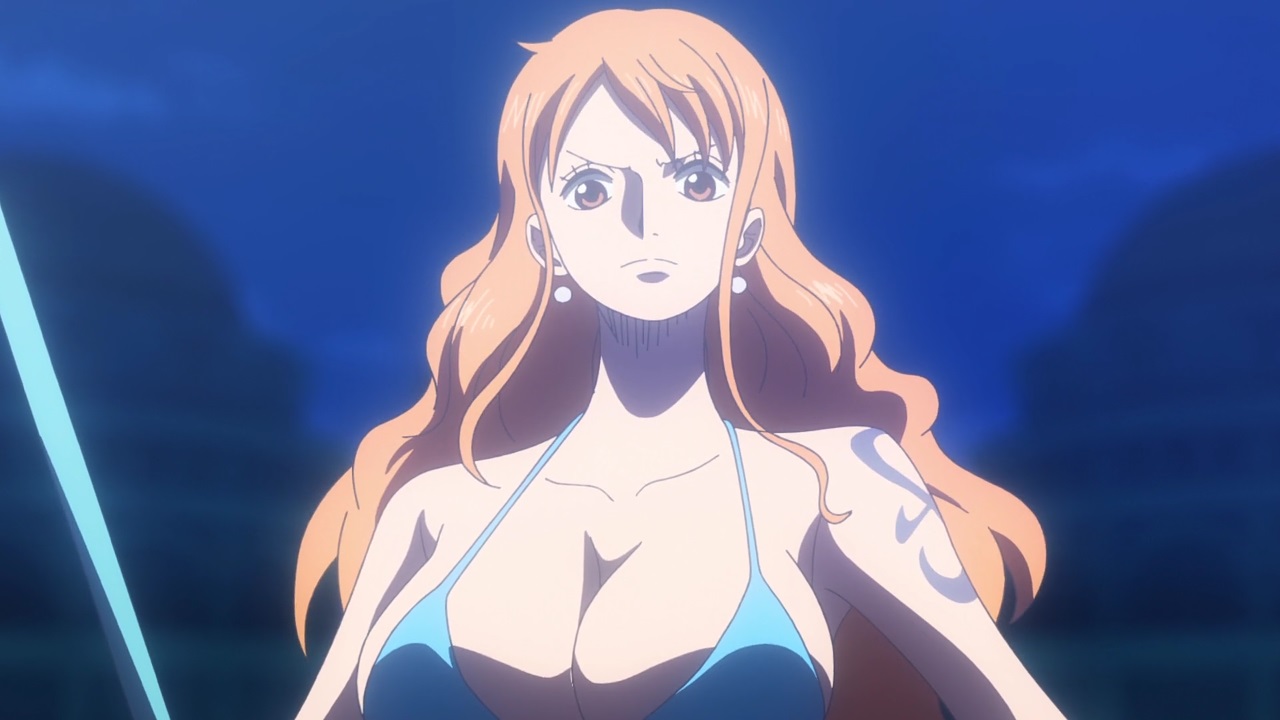 Nami-SWAAAN. The first female member of the Straw Hats and the reason behind the Arlong arc. Nami is an absolutely INCREDIBLE character, and the events of her arc are what set One Piece apart from the other Shounen series on it’s journey as the King.

Nami has one goal, Money. She has a respectable reason for this as well but in her pursuit of money, she deceives many people including Luffy and the other crew members. Luffy being Luffy, he doesn’t blame her, he understands that she must have some reason for betraying them and persists in helping her. This culminates into one of the most wonderful moments in One piece with Luffy placing his most prized possession, his Straw Hat, on a crying and desperate Nami’s head before shouting that he would help her. After this arc, Nami becomes a true crew member with a complete devotion to Luffy thanks to his genuine friendship and ability to trust her, despite her deception.

Nami’s post-time-skip design power up was really huge… She really is one of the best. 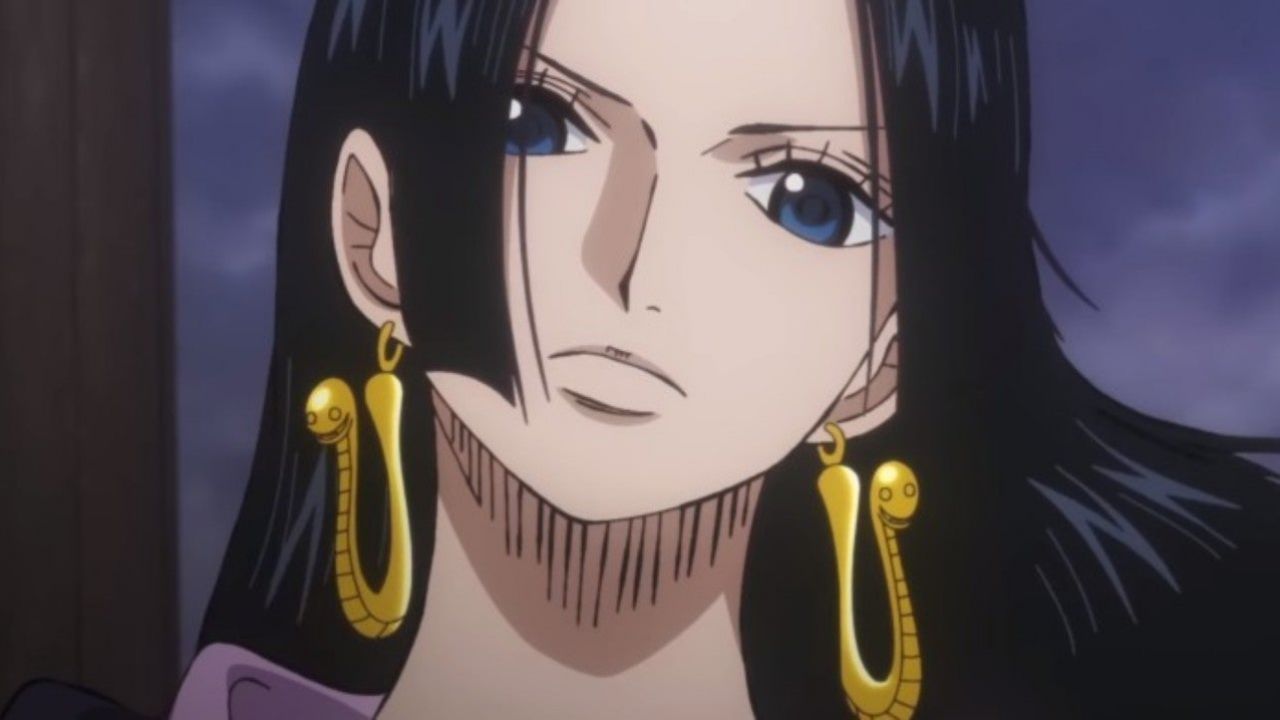 Considered the most beautiful woman in the world, The Pirates Empress Boa Hancock has a lot going for her. She is the Captain of the Kuja Pirates, was a member of the Shichibukai, and the Empress of Amazon Lily. I would have to put Hancock and Nami in the exact same rank, I would struggle greatly to say I outright preferred one of the characters over the other.

Hancock is introduced after the events at Sabaody Archipelago, where she is playing the role of the antagonist. Amazon Lily is an island of entirely women, and due to Hancocks scarring past, she has a serious hatred for men. Considering Luffy ended up on her island, this is why she takes an antagonistic approach when first meeting him. This changes after Luffy proves that he isn’t like most people and he doesn’t let a person’s past affect his opinion of them. From this point on, Hancock begins to develop feelings of affection for Luffy which evolve into a serious feelings of love, to the point where it becomes an adorable part of her character in contrast to how she acts with every other character she meets. Hancock really proves herself to both Luffy and the viewer, when she puts so much on the line to help Luffy as he makes some extremely risky decisions. She absolutely deserves all of the love she gets, she’s great.

That leaves the much anticipated number 1 best girl in One Piece. Of course it can be none other than… Big Mom…. 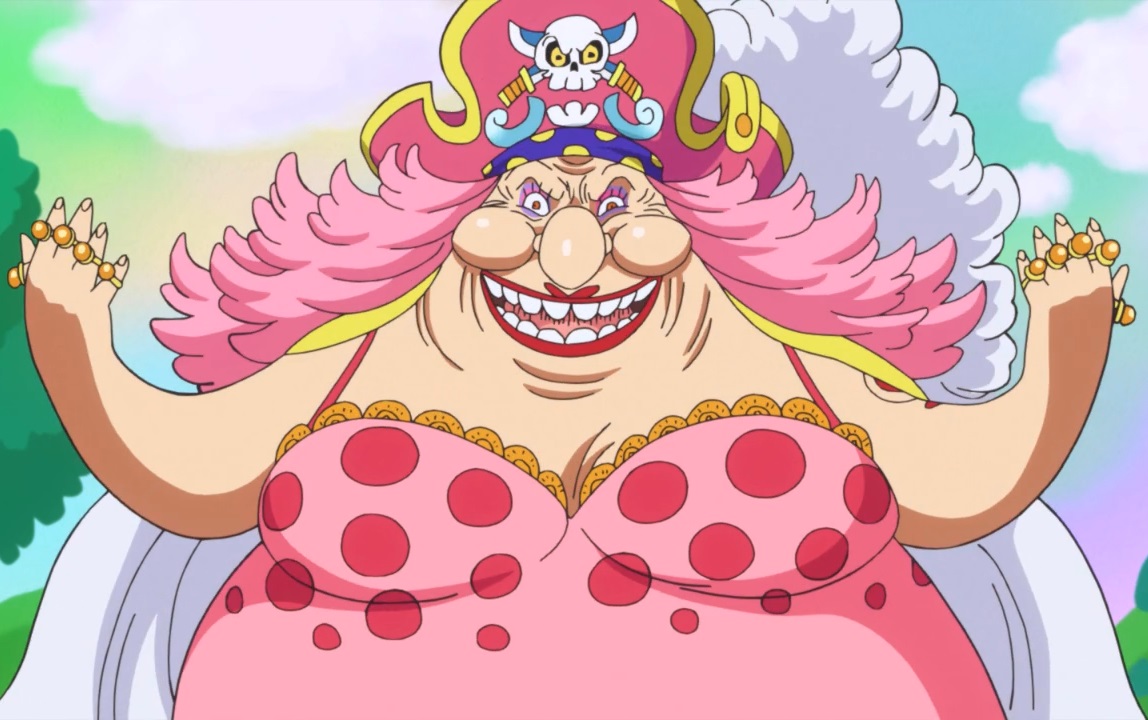 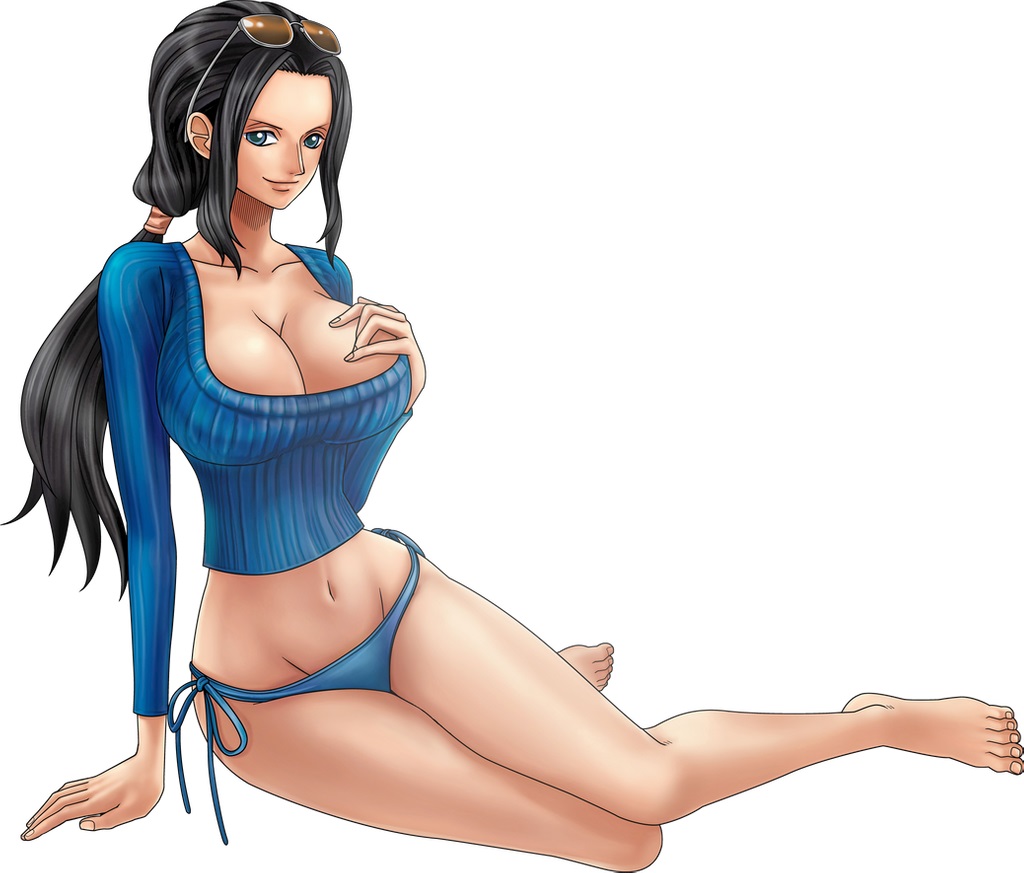 Nico Robin is the only option for best girl in One Piece and there are a ton of reasons for this. I’ll put it out there, I’m 100% a Robin stan, I love this character to death. She is not only my favorite character from the Straw Hats, but she is my favourite character in the entirety of One Piece.

Robin is the only person in the entire One Piece world who can reveal the answers to the series biggest mysteries that cover the Void Century, the location of Laugh Tale, and the three weapons of mass destruction and more. This information is located on large rock structures called Poneglyphs and is written in an ancient language that only the people of the island Ohara could read. The information on these Poneglyphs was deemed too dangerous, leading to the Buster Call bombardment on Ohara. Robin, the only survivor, spent the next 20 years running from the World Government. She couldn’t turn to anyone for help because of the fear they would betray her as she was wanted.

Robin begins to change after meeting Luffy. He begins to show her what a true friend is, and this is cemented when he performs one of the single greatest acts a Shounen protagonist has ever done. After Robin is captured, Luffy goes to save her and he declares war on the entire World Government in order to get her back.

Robin is known as the “Devil Child” and lived a life of complete tragedy without a single person she could call a friend. She suffered so much that she believed it would be better if she was to die. The Straw Hats acts of friendship and camaraderie shatter the depression hanging over Robin. Luffy demands that Robin say the words he wants to hear. Followed by a powerful and emotional scene of Robin screaming “I want to live! Take me out to sea with you”…

What a character Robin is. Throughout all of the unfair bulls**t she has had to face from a young age, she meets a group and captain that would literally fight the entire world in order to protect her. We get to watch this damaged character slowly repair and it’s absolutely wonderful.

And to top it all off…. ROBIN HOT AS HELL, LIKE DAAAAAAAM!

God, I love One Piece. Thanks as always. Stay safe and healthy, friends. 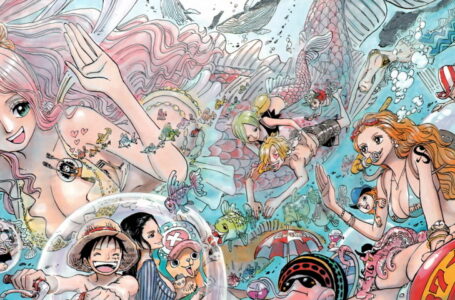