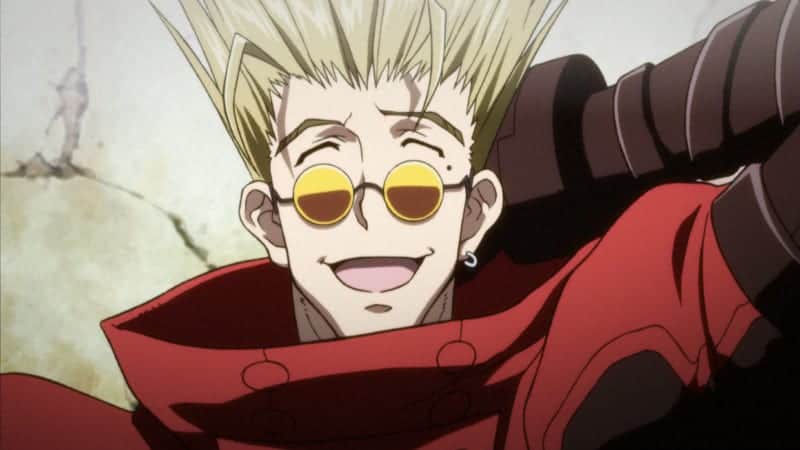 Growing up, we all have our heroes. Some people idolise Superman or Wonder Woman or the Unbeatable Squirrel Girl. For me, I latched on to a slightly different but no less impressive hero. Trigun, the classic post-apocalyptic space-western manga and anime, was one of the first shows outside of Dragon Ball that I fell in love with, primarily because of its ridiculously named hero, Vash the Stampede.

Vash is different than most anime heroes, both in his powers and demeanour as well as the way his journey plays out. He does not seek to obtain more power, nor does he seek out conflict. He is an immortal pacifist who puts on the mask of a fool in order to live something resembling a normal life despite being one of the most powerful beings on the planet.

Who is Vash the Stampede?

Vash the Stampede is the main character of Trigun, a story about humanity in the far future on the desert planet of Gunsmoke. He is first introduced as a force of nature; the first person designated as a walking natural disaster. His arrival in a town is a portent of its imminent destruction and rumours surround him that he destroyed an entire city decades earlier.

When we meet him, however, he does nothing but flail wildly, seemingly avoiding a barrage of bullets and grenades by blind, stupid luck. He jokes and cries at the first sight of danger and is a fiend for donuts. He runs away from conflict, providing only glimpses that, perhaps, he is more than just a fool.

Turns out, both these versions are equally true. For several episodes, we only see him avoiding danger. He never even draws his gun, preferring to disarm his enemies with trickery and the occasional flick of his finger. Even with an entire city chasing him and trying to kill him, he only avoids their attacks. It is not until he is backed into a corner that he draws his weapon with the intent to fight and we see what he is truly capable of.

Although he is something more than human, Vash the Stampede does everything he can to protect people, even as they try to kill him for the sixty-billion double dollar bounty on his head. His body is riddled with scars from when he has put his life on the line rather than kill. He carries with him the belief that there is always another way to solve a conflict rather than killing someone, a belief that is tested by his brother, Knives, who has a decidedly different philosophy.

Trigun is full of big fights against some very beautifully designed characters, but it is the internal pressure Vash faces that is the real conflict. In truth, he could end nearly every fight in a moment if he chose to use his full power and disregard the safety of others. Instead, we see him weep when he accidentally shoots someone in a vital place, even if it was in self-defence.

We see him embrace the image of a violent madman, even though doing so will make people fear him even more, so long as it saves a few more lives. When he is finally forced to kill to save his closest friends, the experience leaves him in a state of mourning for weeks.

Many people might argue that the real Vash is the serious one, that he pretends to be a donut obsessed fool in order to deflect suspicion about who he really is. We certainly see this persona drop on a number of occasions, such as when he pretends to be too drunk to function when women throw themselves at him. I prefer to think that both masks are his true self. That the fun-loving, goofy guy is who he chooses to be and the serious gunslinger is who he sometimes has to be.

Trigun was a formative show in my youth. It contained a hero who hid his vast power and equally vast pain behind a mask of humour, something I have a little experience with. But Vash was more than just this. He was a hero who learned that he didn’t have to be perfect to be good. That he could falter and stumble and that was okay. The biggest lesson Vash the Stampede gives us, however, is that those who look out for others are often the strongest of us.

If you’ve already seen our list of anime to watch during lockdown, you should definitely be adding Trigun to your watch list. You can catch up on it on Crunchyroll.